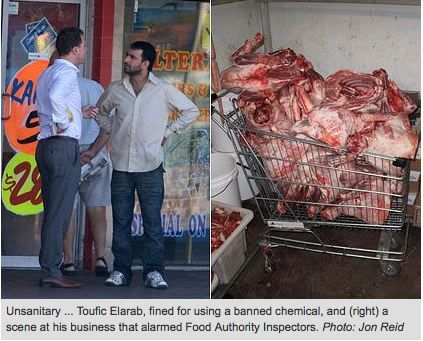 Unsanitary … Toufic Elarab, fined for using a banned chemical, and (right) a scene at his business that alarmed Food Authority Inspectors. Photo: Jon Reid
EXCLUSIVE
BUTCHERS are using the illegal preservative sulphur dioxide to make old and greying meat look fresh. A butcher in Yagoona has become the latest to be caught using the toxic additive – a major ingredient of battery acid – on beef mince.
Toufic Elarab, the owner of Yagoona Halal Meats, was also found by NSW Food Authority inspectors to be storing meat in an unsanitised shopping trolley while beef hung on rusty hooks was allowed to rest against filthy, blood-splattered walls in a storage area.

The butcher is the latest to fall foul of health restrictions against the use of sulphur dioxide to disguise old or inferior raw meat.
Last month RW & MF Brown Quality Butcher on Thompson Street, Drummoyne, was fined $330 for selling beef mince containing sulphur dioxide.
Other butchers fined include Cliffy the Butcher of Brighton, Al-Bashara Butchery on Railway Parade, Lakemba, and Daniels Butcher in the World Square shopping centre on George Street, in the city.
The NSW Food Authority warned that sulphur dioxide carried the risk of serious allergic reaction.
The Food Standards Code allows tiny amounts of the chemical to be used as a preservative in certain processed products, including mortadella, chicken loaf, turkey loaf, frankfurters, luncheon meats, polish salami, devon and manufactured hams. It is banned from all raw meats, including mince, sausages, rissoles and hamburger patties.
NSW Primary Industries Minister Steve Whan said: ”While the vast majority of licensed operators do the right thing, it takes just one dodgy operator to put the community at risk from food-borne illness, which can have a devastating effect.
This is a clear message to those few rogue operators who continue to do the wrong thing: we will get you.”
Yagoona Halal Meats was fined $4800 and and ordered to pay $2000 in costs by the Chief Industrial Magistrate’s Court, which had previously found against the company over six other offences. The Food Authority gave evidence that the storage area had ”rusty hanging hooks and a rusty handsaw contaminated by old, dry meat”. The walls were ”unclean and found to have debris and dried blood on them”.
Having failed a string of inspections over the past few years, the Yagoona butcher is one offence away from being shut down, according to sources at the Food Authority.
On Friday Mr Elarab told The Sun-Herald: ”We used the chemical because it makes the meat redder but we do not use it any more.”
He said he had complied with all the demands made by the Food Authority.

12 Replies to “Halal meat not only is Muslim safe, but you can run a car on it.”