If ever there was a reason to join the EDL this would have to be it. While it isn’t a Muslim story, this will destroy any sense of England, its people, history and autonomy much faster and more surely than an enemy you can actually see and fight.

Eric Pickles last night accused the European Union of trying to ‘wipe England off the map’ by developing a new cross-Channel region, complete with its own ‘flag’.

The Cabinet Minister condemned the EU for ploughing millions of pounds of taxpayers’ money into the ‘Arc Manche’, the name given by Brussels to an ambitious attempt to merge Northern France and Southern England.

Mr Pickles, the Local Government Secretary, says he is incensed to have discovered that Eurocrats are planning to roll out a new Arc Manche ‘transnational emblem’ across England. 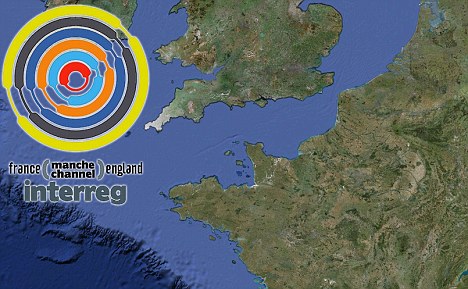 The logo is described by its designers as a ‘series of concentric circles symbolising the flow of projects . . . and bridges between territories’.

It includes the word Interreg, a contraction of inter-regional – the name of a £1billion-a-year EU initiative to reduce the influence of national borders and increase cooperation between countries. The design will be emblazoned on EU ‘vanity projects’ in the cross-Channel area, including:

* A £5.5million scheme to pay for circus clowns to perform throughout the Arc Manche region.

Mr Pickles said he had inherited the plans from the Labour Government.

‘Labour has been conspiring with European bureaucrats to wipe England off the map,’ Mr Pickles said. 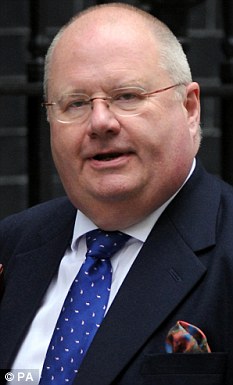 Outraged: Local Government Secretary Eric Pickles claims the system – set up under the last Labour administration – is an attempt to chip away at the UK’s national identity

‘Massive amounts of taxpayers’ money is being wasted on vanity projects. I intend to fight these plans, stop this waste and protect England’s national and local identities from EU empire-building.’

His outburst comes just days after the EU demanded an extra £682million a year from British taxpayers, taking the UK’s annual contribution to the EU budget to more than £10billion – the equivalent of £400 for every household.

Downing Street called the request ‘ludicrous’ and accused EU officials of having lost touch with reality.

Under the cycle lanes project, which will be completed in 2013, a series of paths will run to Channel ports on the French side and then start again on the UK side.

It is described in project documents as an ‘ambitious and large-scale trans-Channel programme’ which will necessitate ‘harmonising road markings and signage’.

The circus clowns scheme, which starts this year and runs until 2012, is called the European Zone Of Artistic Projects, and involves hiring circus companies to perform in ‘artistic exchanges . . . on each side of the Channel’.

The arts project – Face2Face – which runs until next year, ‘will offer tourists and local people a series of unique experiences and encounters . . . and supports a cultural exchange programme for arts professionals and practitioners’.

But the Government does not believe that any of the projects – all of which will bear the new logo – offers value for money to tax¬payers at a time of widespread public cutbacks.

An EU diktat governs the use of the logo, including a warning to the recipients of Arc Manche money that their ‘grant may be reduced if the project does not respect the obligations in terms of publicity’.

The idea of the Arc Manche was dreamt up by the EU 15 years ago as part of a Europe-wide attempt by Brussels to break down national barriers. In 2005, in an effort to increase the profile of the Arc

Manche, a special assembly was created to include representatives from UK local authorities including Devon, Hampshire and Kent, and French councillors from areas such as Brittany and Normandy.

There are 12 other cross-border regions, include projects linking the west of Spain with Portugal and a number of schemes on the borders of Italy.

5 Replies to “‘The EU are trying to wipe us off the map’: Brussels merges England and France in new Arc Manche region… with its own FLAG”