Mark’s Cathedral in Cairo, vowing not to leave until they know the whereabouts of Coptic women, especially Camilia Shehata (AINA 7-23-2010)) who allegedly converted to Islam but are held against their will by the Coptic Orthodox Church in monasteries and churches. The sit-in was called for by the newly-founded Coalition for the Support of New Muslims.

At the time of the Muslim demonstrations, His Holiness Pope Shenouda III was not present in his residence within the grounds of the Cathedral. The head of security at the Cathedral closed the gates and it was reported that Christians have been asked not to come to the Cathedral to avoid altercations with the protesting Muslims.

The Cathedral was cordoned off by the military police and security forces. Cairo saw today three separate protests staged by Salafis against Pope Shenouda and the church, marching afterwards to the Coptic Cathedral in Abbasiya. The first demonstration was in front of El-Fatah mosque in Ramsis Square, the second in front of Al-Nour mosque Abbasiya Square, and the third came out of the Sharia Association mosque in Ramsis. 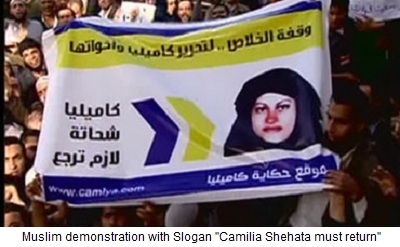 The protesters demanded the resolution of the “ten demands”, which they called for last Sunday, during their protest in front of the el-Kayed Ibrahim mosque in Alexandria, mainly the “trial of Pope Shenouda”, ” the release of Camelia Shehata and Wafaa Constantine” and “inspection of monasteries and churches to look for Muslim women held by the church.”

The Muslims chanted “Islamic, Islamic, against your will, Islamic” in front of the Cathedral and “They abducted Wafaa Constantine, By Allah we will not be silent” and “With our souls and blood, we will defend Islam.” They held banners and photos of the alleged Muslim converts who were allegedly abducted by the church, as well as banners calling for an Islamic State (video of demonstration).

At the time of their afternoon prayers, thousands of Muslims prayed with the organizers, who asked the demonstrators to turn their backs to the Cathedral. 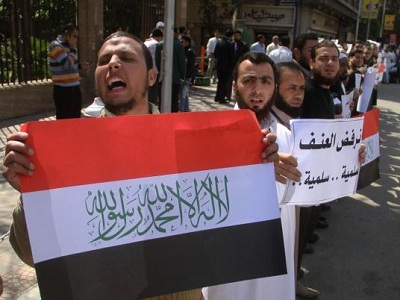 Islamic lawyer Mamdouh Ismail gave a speech in which he called for the realization of human rights and the rule of law, pointing out that this sit-in is not directed against the cathedral as a house of worship for Christians, whom he described as partners in the homeland. He also asked the Christians “to participate in the demonstrations demanding the appearance of Camelia.” In the same context, Khalid Al Harbi, director of the “Islamic Observatory against Proselytizing,” said “we will not go and we will not plead with anyone, but we will take our rights with our own hands.”

A difference of opinion emerged between the organizers of the protest about when to end the protest. Renowned Muslim Salafi leaders Dr. Yasser Borhamy, from Alexandria, sent a message to the protesters asking them to disperse, saying the reason behind the protest was to deliver a message and so that no sectarian strife should occur because of the Salafis, while others like Abu Yehia, who claims he was with Camelia when she converted to Islam, wanted to break into the Cathedral.

Dr. Naguib Gabriel, head of the Egyptian Union of human rights organization, told Voice of the Free Copts that although demonstrations are legal, the Salafi demonstrations aim at incitement to sectarian strife in Egypt. “They call for the release of Camilia Shehata, who said she was a Christian and will live and die as a Christian,” he said (video of Camilia). “Also, the authority who can say if she converted to Islam is Al-Azhar and the Grand Imam of Al-Azhar confirmed two weeks ago that Camilia never set foot there. Do they want a confrontation with the Copts? Do they want bloodshed just because these people are making illegal demands?” 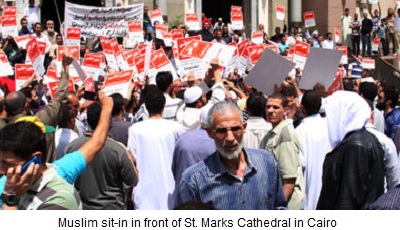 Gabriel said that the Supreme Council of the armed forces should put an end to these demands and the insults to Pope Shenouda and the church as they did last week and on April 25 in Alexandria. He pointed out the disgrace of Egypt being designated a “country of particular concern” by the US Commission on International Religious Freedom. He added that the armed forces have to protect the Copts from the Muslims, otherwise he will go to the International institutions to do so.

Egypt receives $300 million from the U.S. every year to improve on human rights, “So where is this money?” Says Gabriel. “Do we take it to put it in our pockets? Where is this improvement?” He said that a Coptic conference will be held on May 8, to discuss the dire situation of the Copts after the January 25 Revolution.

Islamic lawyer Ismail said after the sit-in was called off , that he has reached an agreement with the army to solve the issue of Camellia Shehata by bringing her out on one of the satellite channels to declare whether she converted to Islam or not , and in exchange the Salafis are to suspend until such time all their demonstrations and sit-ins.