In all honesty, who really gives a flying crap what that freak show in the UN really thinks any ways? The Tundra Tabloids has it said it over and over again, a cell phone should be passed out to each and every UN apparatchik that files out that building on Turtle Bay, with the doors being permanently shut after the last jerk leaves. KGS 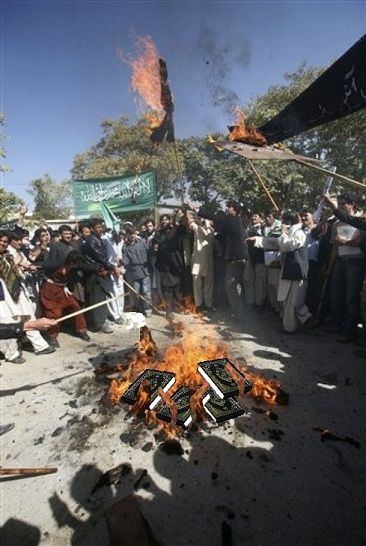 United Nations, Mar 23(ANI): Pakistan has taken up the “despicable act” of desecration of the Holy Quran in Florida with the United Nations, and urged it to take urgent steps to promote inter-faith harmony in the wake of increasing acts of Islamophobia.

In a letter to UN Secretary-General Ban Ki-moon, Pakistan’s Permanent Representative Ambassador Abdullah Hussain Haroon voiced his country’s strong condemnation of the burning of the Islamic holy book, and expressed “profound regret and deep concern” at the growing trend of Islamophobia, intolerance and hatred towards Muslims as well as insults to their religious symbols and personalities.

Controversial American pastor Terry Jones, who last year cancelled a plan to burn copies of the Koran to mark the anniversary of the September 11, 2001 attacks on the United States after international condemnation, oversaw the burning of a copy of the Quran at his small Florida church on Sunday after the Islamic revered book was put on trial.

“While this reprehensible act is the work of extremists and is evidently designed to provoke dissent and discord among communities and peoples across the world, such sacrilegious acts also go against the very concept of inter-faith harmony and threaten the multicultural fabric of the societies and the brotherhood of the United Nations,” The Nation quoted Haroon’s letter, as saying.

4 Replies to “PASTOR KORAN BURNER GETS SPECIAL ATTENTION BY PAKISTAN IN THE UN…….”