By James Chapman and Daniel Martin
Last updated at 10:03 AM on 2nd February 2011 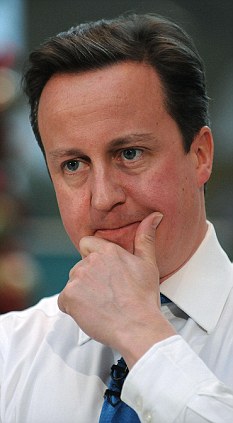 Extraordinary move: David Cameron has decided to give his MPs a free vote on the issue of allowing prisoners the vote

Tory MPs are to be given the green light to assert the supremacy of Parliament in a defining battle with the European courts.

David Cameron has accepted he has no chance of persuading Parliament to back demands from Strasbourg to give thousands of prisoners the vote for the first time in 140 years.

In an extraordinary move, the Prime Minister has decided to give his MPs a free vote on the issue – effectively encouraging them to refuse to bow to the European Court of Human Rights.

A defeat would allow the Government to go back to the court in Strasbourg and insist it has tried, but failed to change the law – and that the democratic will of Parliament should prevail.Conservative MPs insist the time has come to draw a ‘line in the sand’ after decades of kow-towing to the European courts.

Government sources say it will be ‘helpful’ if Parliament expresses a clear view on the issue of votes for prisoners and enables ministers to insist on the ‘minimum possible’ change in the law.

Tory whips now expect a ‘thumping’ verdict of defiance when MPs vote on the issue later this month. Backbench MPs are expected to be given a free rein to oppose the proposals, while even ministers will be allowed to abstain.

‘That would certainly be consistent with what we have been saying about the House expressing its view on it,’ the Prime Minister’s spokesman said.

The vote engineered by Mr Straw and Mr Davis is symbolic rather than a binding vote on whatever legislation emerges later this year.

However, ministers believe that Parliament expressing its view clearly will strengthen the Government’s hand in a battle with the ECHR. 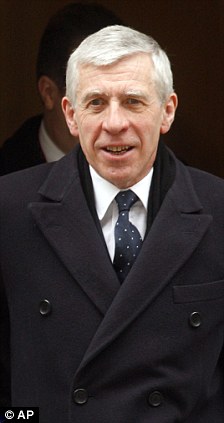 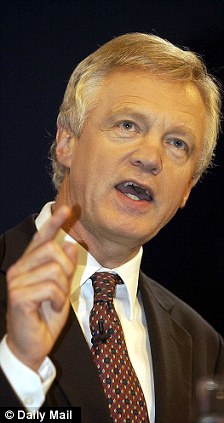 It may also embolden Tory Eurosceptics who want the Government to take a tougher line on the issue of Europe to make their views known in other areas.

Andrew Griffiths, a Tory MP on the Commons constitutional reform select committee, said: ‘I have received dozens of letters and emails from constituents who are outraged at the thought of giving the vote to prisoners, and one in support, and that was from a convicted murderer.’

The issue is a delicate one within the Coalition, since the Liberal Democrats actively wanted to enfranchise prisoners before the election. The Prime Minister, by contrast, has said the prospect makes him feel physically ill. There is anger among ministers over the handling of the issue by Deputy Prime Minister Nick Clegg and Attorney General Dominic Grieve.

They were instrumental in proposals unveiled last year to give the vote to criminals serving sentences of four years or less. Anger on the Tory benches has already forced the Coalition to consider lowering the threshold to one year. 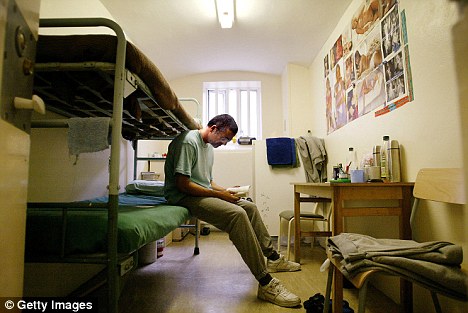 Legal action: Prisoners across the country are taking on the Government because it currently denies them the right to vote

The Government says it has been forced to legislate to enfranchise convicted criminals after losing a ruling at the Strasbourg court.

Labour held a series of consultations on changing the law but dragged its feet rather than attempting to confront the European rulings. But ministers say they will now face compensation claims worth tens of millions of pounds if they do not respond.

Thousands of prisoners have started legal proceedings against the Government because the law currently denies them a vote. 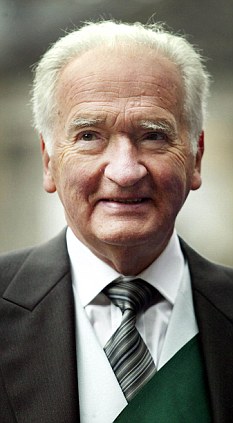 Time to obey: Former Lord Chancellor Lord Mackay has said that Britain must recognise its obligations under the European Convention on Human Rights

Yesterday it emerged that two Scottish inmates are to complain to ECHR three months after the court warned the Government that it faced huge penalties for failing to give prisoners a vote.

The men, known as Greens and MT, claim that the Government’s proposals will deny them the right to vote in Scottish and Welsh elections in May in clear breach of the ECHR ruling.

Legal experts warned that the Coalition’s referendum on the voting system, also due to take place in May, could be declared illegal, because prisoners will not be able to vote.

One lawyer told MPs that the date of the poll – and that of the Scottish and Welsh elections – might have to be put back until the prisoner votes issues had been sorted out.

Aidan O’Neill QC, an expert on prisoners’ rights, told a Commons committee that the UK was on its final warning from the European Court – and that he had ‘plenty of clients in the wings’ willing to challenge the legality of any elections due to take place.

Opponents point out that 13 signatories to the human rights convention still have blanket voting bans on prisoners.

3 Replies to “A line in the sand on Europe: Tory MPs get go-ahead to defy Strasbourg over prisoner votes”