Posters issuing a fatwa against Theresa May have appeared in South London, prompting an investigation by Scotland Yard.

The Metropolitan Police are seeking the source of the Wild West-style posters, which claim the fatwa has been issued ‘for the abduction, kidnapping and false imprisonment’ of various radical clerics.

A fatwa can – but not always – be interpreted as an incitement to kill, and is an order issued by scholars in the Islamic faith. 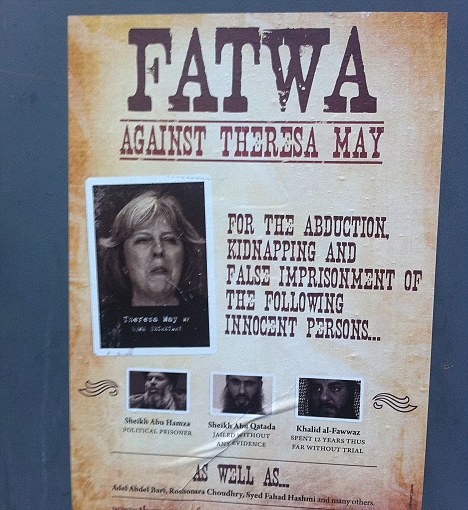 Death threat: One of the posters issuing a fatwa against Theresa May

In Sunni Islam a fatwa is considered non-binding, while in Shia Islam it could be considered by an individual as binding.

The posters appeared at the same time as the Home Secretary announced in Parliament yesterday controversial reforms of control orders for terrorism suspects.

A link on the posters directs people to a website which states: ‘The current reality of Muslims living in Britain has unfortunately become very bleak; what was initially perceived by some, to be a malicious smear campaign against the Muslim community has now turned into something far more sinister.

‘Subsequently, as a response to this extremely critical situation and having been left with no other alternative, a Fatwa has been launched against the head of internal affairs and national security, Theresa May.

‘We understand the seriousness of this religious verdict, and will be releasing further information in due course.’

The website specifies high-profile Muslims such as Khalid al Fawwaz, 48, a Saudi Arabian with links to Osama Bin Laden who is currently fighting extradition to the U.S. on allegations of terrorism. 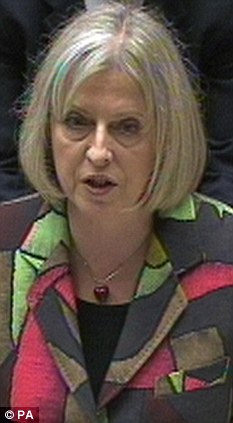 It also defends hook-handed cleric Sheikh Abu Hamza who is detained while awaiting extradition to the U.S., and Abu Qatadah – ‘a loving father and an ailing elderly man’.

The group which issued the posters, Theresamayfatwa.com, said it is planning to hold a press conference in Central London next week to explain the details of the fatwa.

Abu Bakr, a 27-year-old adult learning teacher and spokesman for the group, denied the fatwa was a physical threat against the Home Secretary.

He said: ‘Perhaps 10 years ago people were confused about what a fatwa is but now so many have been issued that I think most people realise what they are.

‘A fatwa is an answer to a question, and it could relate to a political question or even a marital problem.

‘The contents of the fatwa can’t be revealed until the press conference.

‘But we have Muslims such as Khalid al Fawwaz who have been held in prison for 12 years without charge or evidence against them.

‘What we want to do is ask Muslims if a situation like this is allowed in Islam? Should we vote for someone like Theresa May and what relationship should we have with a government like this.

‘For someone like Abu Hamza there doesn’t seem to be any hope for them, even though they are not accused of any crimes.

‘Secret evidence is used against them in these situations and there seems to be one rule for Muslims and another rule for others.

‘We are not really an organisation as such, more of a community group that has come together to raise questions about these issues because something needs to be done about it.’
Enlarge 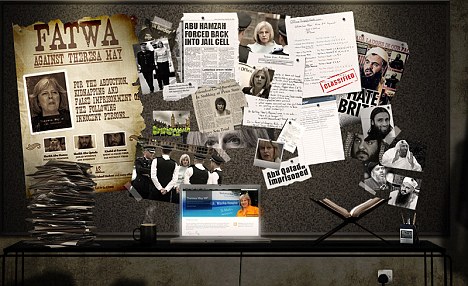 Website: The posters direct people to this online page

The posters have been spotted on phone boxes, bus shelters and walls in Balham and Tooting and are being treated ‘as graffiti’ by Wandsworth Council, which is treating them with a no tolerance policy.

‘As soon as we see them or they are reported they will come down.’ said a spokesman for the council.

‘We urge residents if they see them go up again somewhere else to let us know and we will get rid of them.’ 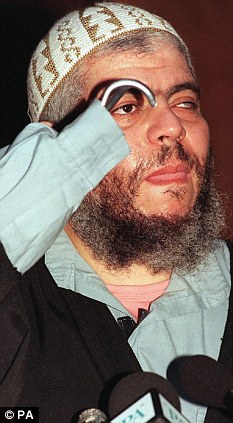 Detained: Abu Hamza is among the Muslims the group seeks to defend

Yesterday in Westminster Mrs May unveiled a reform of control orders for terrorism suspects that has been attacked for retaining controversial overnight curfews and electronic tags for terror suspects.

Deputy Prime Minister Nick Clegg attempted to save face with his backbenchers by having the control order regime watered down and re-named Terrorism Prevention and Investigation Measures, or T-Pims.

But he was mocked after trying to claim that forcing a suspect to stay in a fixed residence overnight for up to ten hours was not a curfew.

It was a central issue of the reforms on which Mrs May, acting on advice from MI5, refused to budge.

Mrs May has been told about the posters by Sadiq Khan, MP for Balham and Tooting.

A spokesman for the Home Office said: ‘We are aware of the posters but we never comment on matters of the Home Secretary’s personal security. It is a matter for the police.’

Scotland Yard is trying to trace the people behind the posters.

‘We are aware of the posters and we have liaised with the local authority as to their removal,’ said a spokesman for the Metropolitan Police. Inquiries are ongoing.’

It is unclear how seriously the Home Office and Scotland Yard are taking the posters, given that a fatwa can be interpreted as an incitement to murder. 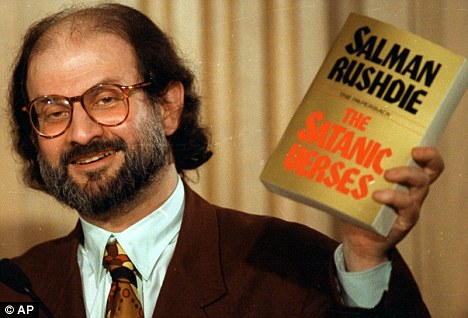 Order: Author Sir Salman Rushdie was the subject of a fatwa in 1989

The author Sir Salman Rushdie was the subject of a fatwa issued by Iran’s Ayatollah Khomenei in 1989 after the publication of his book Satanic Verses.

Rushdie was forced to go into hiding and given round-the-clock protection from police for nine years.

The order, which urged all ‘zealous Muslims’ to execute the author, was lifted in 1998 when Iran’s leadership said the threat of assassination was no longer a possibility.

However, he recently revealed that he receives a reminder every year from Iranian extremists that they still want to kill him.

The author said the threat comes in the form of a ‘sort of  Valentine’s Day’ card each February 14th.