The day that the various British government officials are put on trial for high treason, for deliberately working to destroy England as a culture, as a people, as a history and set of religions representing the Western intellectual and spiritual tradition the better. 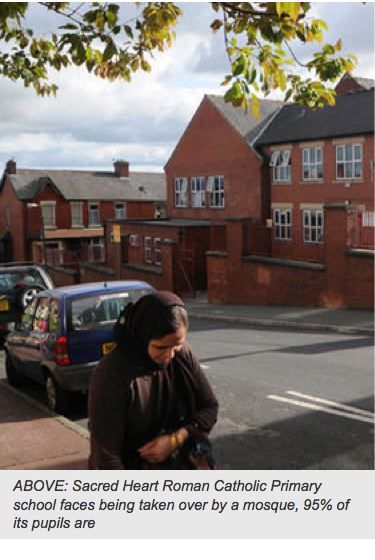 From The Daily Star

A CATHOLIC school faces being taken over by a mosque after it was revealed that 95% of its pupils are Muslim.

It is believed to be the first case of its kind in Britain.

Church leaders say it is no longer “appropriate” for them to run Sacred Heart RC Primary School which has just six Christian pupils.

Just 10 years ago more than 90% of pupils were Catholic. But now most are of Asian origin, do not speak English as their first language and follow Islam.

The school in Blackburn, Lancs, could be handed to the nearby Masjid-e-Tauheedul mosque.

Harry Devonport of Blackburn with Darwen Council Children’s Services, said the decision to abandon the school was made by the Diocese of Salford.

Diocese education director Geraldine Bradbury said: “We have never experienced a change to this extent before. We would not be serving the local community by insisting that we run the school. It brings things like having a Catholic headteacher and devoting 10% of the timetable to RE.

“It would be wrong of us to insist on putting a school community through that.”

The mosque runs an Islamic girls’ secondary school. Head Hamid Patel said: “Given that almost all of the pupils are Muslim, it makes sense.”

Other organisations are in the race to run the school – in a predominantly Asian populated area of the town – including the Church of England diocese.

But the Tauheedul mosque is favourite to take over. A report to the local council said any attempt to turn Sacred Heart into a non-religious community school would be rejected because of the Coalition Government’s “stated preference for new faith schools and free schools”.

Mr Devonport added: “There will be no disruption for children at the school.”

4 Replies to “Catholic school taken over by Islam UK.”