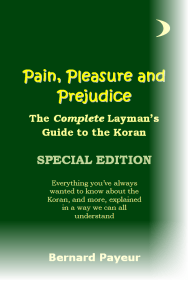 So. One day, a Canadian systems analyst decides to read the Quoran. He knew nothing about Islam except some mild nagging misgivings about the religion, and he was inspired to read it by a chance encounter, in Montreal, with an East African prostitute who had come to Canada to escape a forced marriage. Mr. Payeur decided that he needed to dispel his own misgivings about Islam by reading the Quoran so he could relax about it and join the chorus of people who argue that the violent, hate filled, war like, violent aspects of Islam or at least the Koran, are misinterpretations.

After his fourth time through an Al-Azaar approved translation of Islam’s holiest book, he decided to use his skills as a systems analyst and do a complete layman’s guide to this book as he feels, and I agree, that everyone should read this thing if they are old enough to be able to read it objectivly and not be influenced by the misogyny, hatred violence and sex in it.

In other words, this book, the Koran, may not be suitable for children.

After reading this book, I think it should be re-titled, or at least add it to the cover, ‘A quiver full of arrows’ as reading this book will indeed allow the reader to argue successfully with any apologist of Islam and even Muslims themselves and likely win the debate.

Typically, I do not like the approach of developing scholarship of Islam to argue the issue of Islam in the West. It is, I feel, always a bad idea to play the enemies game by the enemies rule. We do not need, for example, to know if the Burka is truly a requirement of Islam should a govt. choose to ban it. We just need to decide if its good to allow it in our own cities.

By the same reasoning we do not need to know if Islam truly demands the killing, enslaving, raping and subjugation of ‘unbelievers’ in order to say that typically it is Muslims who do this claiming it is their religion to do so, and it should never be our place to argue the fine points of their religion with them, as that is a fight we will nearly always lose, unless you are Robert Spencer and are ready to dedicate a substantial part of your life to developing that scholarship and frankly, debate is not part of Islam. Blind obedience is. Debate is a Jewish-Greek-Christian thing.

Even so, Mr. Bernard’s most excellent book is an entertaining way to gather the materials and facts you need to debate Islam with those apologists for it that insist it is a religion of peace or more typically, make false moral equivalences with the bible etc. Bernard dispels that notion in chapter 1.

The book is also full of fascinating observations. Here is one that even Phyllis Chesler might have missed:

‘The Koran does not mention one woman by name except Mary and that is to say that Mary claims she is not the mother of god.’

Thats right the Koran does not have one woman in it as an actual named person, except where one can be ventriloquised to suit Mohamed’s agenda. A fact I am rather stunned has not been pointed out, at least to my knowledge, before now.

Payeur’s book is full of useful observations like this and as it is not based on the work of authors familiar to us already, it is quite a refreshing approach to the usual explanations of the facts and workings of traditional Islam, as prescribed by the Koran.

All this to say that I very much recommend getting Pain, Pleasure and Prejudice and getting settled in for several hours worth of highly entertaining and informative reading and analysis on the book which may well herald the return of the dark ages, The Quoran.

Below, a very rare interview with the author that I scavenged from the Internet.