Proving that the Leftist, violent, special Olympics is not limited to Europe, today a group of “anti establishment” (I haven’t heard that term since the 70s) claimed to have firebombed a bank branch in Ottawa’s west end. This of course will only have the effect of making life more inconvenient for the average schmoe as well as making life more expensive for the poor as security costs rise. A hint to the police if they want to catch them. Start by looking at recent university graduates. I bet long odds thats that was where they learned their crypto-economics that motivates this short-bus terrorism.

(No offence at all to people with Downs Syndrome. Typically they are the nicest and most well meaning of people completely unlike the total idiots who did this) 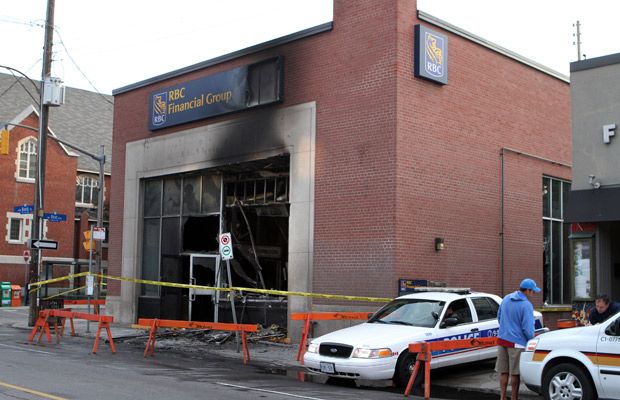 OTTAWA — An anti-establishment group claimed responsibility for the firebombing of a Glebe bank early Tuesday morning.

The group also vowed to “be there” at the upcoming G8 and G20 summits in an online video that shows a massive fireball exploding from the front window of a Royal Bank of Canada branch on Bank Street and First Avenue.

In the short clip, one person emerges from the branch’s side door and is then silhouetted against a vivid orange flash. Another person follows him out the door and the pair begin to head east across First.

“The Vancouver Olympic games are over, but a torch is still burning,” the text reads.

Firefighters responded to the blaze at about 3:30 a.m. Tuesday, and had it under control just after 4 a.m. No one was injured.

The video was posted on an anti-establishment website at 11:59 a.m. Tuesday. It appears to have been shot on a handheld camera from the northwest corner of the intersection.

“Resistance continues,” the text reads. “An RBC branch can be found in every corner of Kanada (sic).”

In the next paragraph, it mentions the G8 and G20 conferences that are to take place at the end of June in Huntsville and Toronto, where “‘leaders’ and bankers (will) make decisions that will further their policies of exploitation of people and the environment.

When informed by The Citizen of the video’s existence, lead investigator Sgt. David Christie said the attack was “one of many theories put out there (as to) what the motive would be.”

RBC has been a favourite target for self-styled anarchists protesting the Vancouver Winter Olympics.

In 2008 the firebombed branch had had its windows smashed by brick-throwers.

An online posting signed “Riot 2010!!! ~Ottawa Anarchists” claimed credit for two such incidents Jan. 27 and Feb. 12, 2008, as well as a March 11, 2008, incident at the Elgin and Lisgar streets branch that “was again the target of our rage against the evils they sponsor.

“The trashcan we hurled through their window shows what we think of their Corporate Circus.”

A letter sent to The Citizen in February 2008 said the vandalism was an act of “solidarity” with those who were fighting the 2010 Olympic games “and its corporate sponsors.”

But RBC itself came under fire in the video’s text, taking aim at the bank’s claim to be one of Canada’s greenest employers (which stems from a competition organized by editors of Canada’s Top 100 Employers, according to an RBC release).

“RBC is now the major financier of Alberta’s tar sands, one of the largest industrial rojects in human history and perhaps the most destructive,” the text says.

The website on which the video is posted has “Montebello” written across the top, bringing to mind violent clashes in Quebec between riot police and protestors outside the Château Montebello in August 2007.

Five police officers were injured in the confrontation, which saw more than 1,000 protestors face down tear gas, pepper spray and plastic bullets, replying with rocks, tomatoes and stone-filled bottles.

RBC spokeswoman Gillian McArdle would not address the video when made aware of its contents by The Citizen Tuesday afternoon.

She was unwilling to say if RBC would be stepping up security in the wake of the firebombing.

McArdle did stress that safety deposit boxes had not been damaged, and added that branch staff would be redeployed to other locations.

Two employees appeared shaken as they surveyed the damage Tuesday morning. They declined to comment, and did not linger.

The damage to the branch was considerable.

Fire officials said the blaze began in the foyer of the building. Smoke and heat damage then spread throughout the branch, leaving windows cracked and shattered. Two ABMs in the front of the branch were charred almost beyond recognition.