The UN Human Rights Council, dominated by dictatorships like China, Cuba, and Saudi Arabia, concluded its last session by once again turning a blind eye to millions of victims of human rights violations in 187 countries, including of the well-documented repression and killings this year in Iran, China, and Nigeria.

The 47-nation council instead devoted an inordinate amount of its limited time and diplomatic resources to resolutions targeting Israel, texts that effectively legitimized Hamas terrorism. In particular, the council adopted a new resolution to perpetuate the Goldstone Report — a deeply flawed and one-sided text that rejected any Israeli self-defence as an act of “futility” — by creating a new UN committee of so-called legal experts that will keep the Hamas-supported accusations alive in future reports; requiring the UN rights chief to raise the report in future sessions; and establishing a new escrow fund for Palestinian victims of last year’s Israel-Hamas war, but not for any Israeli victims — not the dead and wounded from more than 10,000 rocket attacks, and not for the hundreds of thousands of traumatized citizens.

Following is the UN Watch speech during the Goldstone Report debate, as delivered by Cindy Tan, 2009-2010 Richard and Rhoda Goldman Fellow at UN Watch. Ms. Tan’s earlier testimony on her family’s suffering in the Cambodian genocide can be viewed here

Resolution S-9/1, under which we meet today to once again discuss the Goldstone Report, was adopted on 12 January 2009. This was the text that established the fact finding mission, focused only on alleged Israeli crimes, and declared Israel guilty from the start—of “massive violations.”

At the same time, the Goldstone Mission, all must admit, adopted a curious attitude toward its founding resolution.

In Annex II of the Goldstone Report we see the following. On 3 April 2009, the day he was named to head it, Judge Goldstone’s first act was to write to Israel under the following letterhead: “Human Rights Council International Independent Fact Finding Mission Established by Resolution S-9/1.” 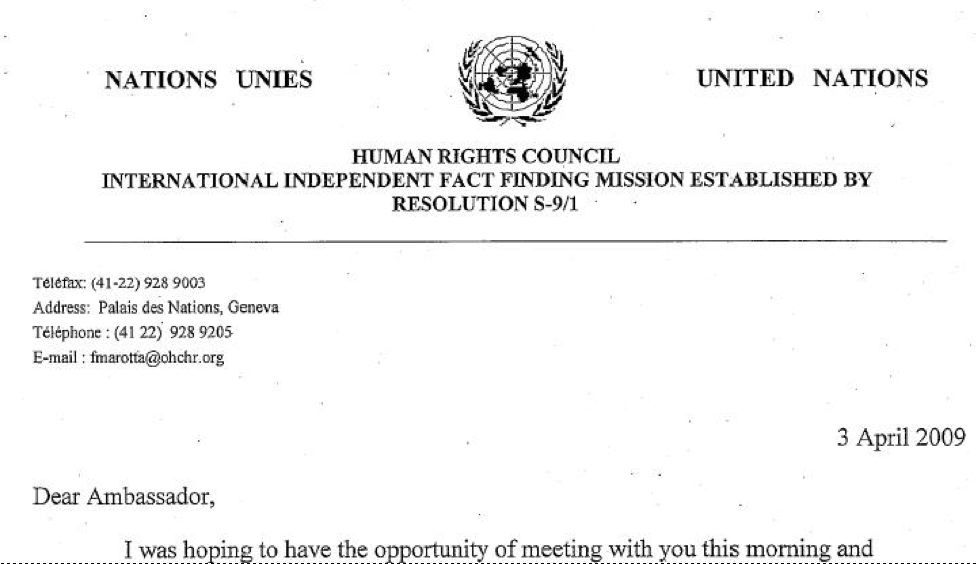 Around this time, Judge Goldstone and his colleagues were criticized by many for having accepted to work under such a biased mandate.

Something interesting then happened.

Five days later, the official letterhead and title of the Mission changed. Mr. President, why did the Mission delete the reference to its founding instrument, Resolution S-9/1?

Then, in Judge Goldstone’s letter of 29 April, the Mission title and letterhead were changed yet again. The latest name read: “United Nations Fact Finding Mission on the Gaza Conflict.”

Here we have the quiet removal not only of Resolution S-9/1, but even of the name “Human Rights Council.”

Mr. President, why did Judge Goldstone and his Mission delete the name of this Council, the body that created his Mission?

Was this an attempt to distance the Mission from this august body?

All of this culminated in Judge Goldstone’s various and alternating arguments as to how he changed the original, one-sided mandate of S-9/1, and the guilty verdict that was issued from the start:

Legally, of course, none of these arguments has any basis whatsoever.

In truth, one need merely look at the final version ratified by the UN General Aseembly on 18 December 2009: there we see the original mandate, the original guilty verdict—unchanged, unamended. (See UNHRC report, Art. 14, at p. 165.)

Mr. President, is this the rule of law?