For the Muslims Vs. everybody files. Hard to say exactly who did what to who in this story, but if you check, Muslims are busy doing what they do best in nigeria, ethnically cleansing all non Muslims out of their homes and areas. I can’t figure out if that is what this is, or if this is fighting back. 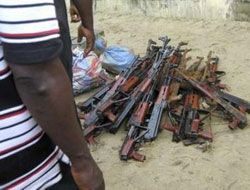 More than 100 people were killed in clashes on Sunday between pastoralists and villagers near the central Nigerian city of Jos, witnesses said.

Villagers in Dogo Nahawa, just south of Jos, said Fulani pastoralists from the surrounding hills attacked at about 3 a.m. (0200 GMT), shooting into the air before slashing those who came out of their homes with machetes.

A Reuters witness who visited the village counted around 100 bodies piled in the open air. Pam Dantong, medical director of Plateau State Hospital in Jos, showed reporters 18 corpses that had been brought from the village, some of them charred.

Officials said other bodies had been taken to a second hospital in the state capital.

It was not immediately clear what triggered the violence.

Four days of sectarian clashes in January killed hundreds of people in Jos, the capital of Plateau state, which lies at the crossroads of Nigeria’s Muslim north and predominantly Christian south.

HRW calls for probe on massacre of Muslims in Nigeria / PHOTO

Nigeria death toll rises to 500 after four day of clashes

Nigeria may relax curfew after burying victims at mosque

Below, we can see more of the great works of Islam in Africa such as, dragging the bodies of Christians behind jeeps. Here is a Muslim propaganda video of Somalian-Muslim armies taking over parts of Christian Ethiopia. Not exactly Mother Theresa at work here.

One Reply to “Village attacked, scores dead in Nigeria”