BUT THIS IS HAMAS SO
WHY SHOULD THEY BE BELIEVED? 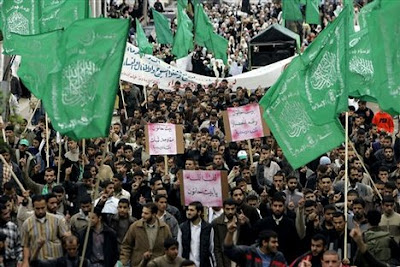 Hamas during happier times,
shouting death to Jews and to Israel

Sorry folks, but the Tundra Tabloids will believe Hamas is serious about recognizing Israel after seeing a period of two years or more of no incitment of Jews and of Israel in their mosques, schools, media and television programing, as well as cracking down on those who continue to promote it.

Most importantly, there has to be seen a drastic improvement in the way they deal with their own citizens’ human rights, and rule of law. When Hamas is no longer a danger to their own people, they’ll no longer constitute a threat to the State of Israel. But this all brings a couple of interesting aspects to light, so you’re going to have to look at this recent development from at least two perspectives:

a) The blockade indeed worked, which proves the anti-Israel nay-sayers to have been grossly wrong, and that by ending it too early, would have only served the Hamas’ best interests, or b) the Arabs are simply practicing what they do best in their dealings with the non-Muslim, taqiyya, lying through their teeth in order to gain some advantage that is impossible duing the present day status quo.

The Tundra Tabloids believes that the latter is the most likely of scenarios, and before popping the champagne cork, it’s best to look back a bit, and see how the “secular” PLO supposedly recognized Israel, when in fact, the letter deliverd by Yasser Arafat to then US president, Bill Clinton, did no such thing.
Still to this day, most PLO reps vehemently deny that they ever officially recognized Israel. The TT knows of one Finnish journalist who covered the ME beat for over twnety years, and who was present during the voting, who told me that the PLO representives coming out of the vote all had different views on what then just took place. In fact, they just agreed to agree on a future date to discuss the issue of changing their charter in order to recognize Israel. KGS

Hamas ready to cancel charter according to senior official

Hamas has accepted Israel’s right to exist and would be prepared to nullify its charter, which calls for the destruction of Israel, Aziz Dwaik, Hamas’s most senior representative in the West Bank, said on Wednesday.

Dwaik’s remarks are seen in the context of Hamas’s attempts to win recognition from the international community.
Dwaik is the elected speaker of the Palestinian Legislative Council. He was released a few months ago after spending nearly three years in an Israeli prison.
Dwaik was among dozens of Hamas officials and members who were rounded up by Israel following the abduction of IDF soldier St.-Sgt. Gilad Schalit near the Gaza Strip in June 2006.
His latest remarks were made during a meeting he held in Hebron with British millionaire David Martin Abrahams, who maintains close ties with senior Israeli and British government officials.
Abrahams is scheduled to brief British Foreign Secretary David Milliband this weekend on the outcome of his meeting with Dwaik and other top Hamas officials in the West Bank.
Abrahams, a major donor to Britain’s Labor Party, told The Jerusalem Post he would urge Milliband to “consider the implications of Hamas’s positive overtures.”
During the meeting in Hebron, Dwaik stressed that other Hamas leaders, including Damascus-based leader Khaled Mashaal and Gaza Prime Minister Ismail Haniyeh, have voiced support for the idea of establishing an independent Palestinian state within the pre-1967 boundaries.
“The [Hamas] charter was drafted more than 20 years ago,” Dwaik noted, adding that his movement would even be prepared to “nullify” the document.
Read more.