From the far far worse than terrorism files, another story that should raise eyebrows higher than terrorism raises alarms. Although this story is a couple of years old, it is on the world-wide-slippery-slope to sharia. like the bar in New York City being warned not to serve alcohol, (isn’t that an Arab word?) this story is an example of how all the western world will be forced incrementally to submit to Islam through the efforts of our own politically correct, our leftists at the behest of Islam. Once you accept that serving free soup is offensive to someone who chooses not to eat that soup for religious reasons, you have effectively consigned yourself to sharia law.

It was scant decades ago when what I have said above was absolutely common sense and it would have been insulting indeed to have said it, as it was so obvious, it was an affront to the intelligence of the listener.

The slippery slope of Islamic demands, bad logic and political correctness has changed the western world at a furious pace. The very concept of responsibility and consequences with choice has been replaced by victim politics.

Thank you to Proud-Kaffir for sending me this story. Any news about submission to irrational religious authority is profoundly appreciated. 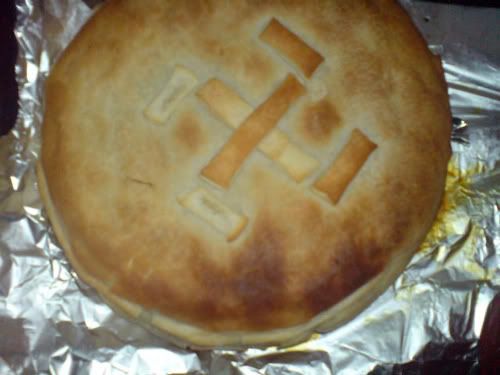 Soup kitchen serves pork: So far have things gone in the direction of dhimmitude that for a Catholic charity in Nice, France to serve pork to the homeless in a Christmas-time vegetable soup is deemed a provocation. Dominique Lescure, head of Soulidarieta (“Solidarity” in Provençal), shouted in a heated exchange with jeering protesters outside a church, “I don’t see why I should not be able to put pork, which has always played a major role in my country’s cuisine, into a traditional soup that I want to distribute.” The free soup drew about as many protesters as poor people. Tensions ran so high that police had to divide the two groups and the deputy mayor of Nice, Noel Ayraud, showed up. He sagely noted that he could do nothing to stop the proceedings: “Serving soup with pork is not a crime.” (Not yet, anyway.) Protesters denounced the group as racists, with a left-wing militant named Teresa Mafeis barely holding back tears of anger: “This pork-based soup kitchen is pure discrimination. It’s an in-your-face way of telling people who don’t eat pork, you can stay in your cardboard boxes and starve. After the holidays, we’re going to set up our own soup kitchen, and there will be shorba [Arabic, “soup”] for everyone.” A Muslim woman raised the ante by shouting, “Our fathers are Muslims, and they fought for France with honor and loyalty.” (December 23, 2005) Jan. 25, 2006 update: One could not make this up. I quote the BBC:

Identity Soup, as it has been dubbed by its chefs, was banned in Strasbourg this month after officials ruled it could lead to public disorder. “Schemes with racial subtexts must be denounced,” Strasbourg’s mayor Fabienne Keller said. Although no ban exists in Paris, police have closed soup kitchens in the capital’s Montparnasse and Gare de l’Est train stations on administrative grounds. Volunteers were ordered to re-seal soup containers on the basis they did not have the necessary permits to distribute food. A leading French anti-racism movement has urged Interior Minister Nicolas Sarkozy to ban pork soup give-aways throughout the country. Bernadette Hatier, vice president of the Movement Against Racism and for Friendship Between Peoples, said the scheme was a ploy to drum up far-right votes ahead of 2007 presidential elections.

Feb. 28, 2006 update: The controversy continues. In Paris, more than 200 demonstrators defied a police ban to eat “pig soup” in public. Their leader, Odile Bonnivard, climbed a car and with a megaphone declared, “We are all pig eaters! We are all pig eaters!” Despite four vans filled with anti-riot police at the ready, the police did not intervene. “We’re not yet living in a land of Islam,” Bonnivard announced from atop the car. In an interview, Bonnivard explained that her organization, Identity Bloc, used smoked bacon, pigs’ ears, pigs’ feet and pigs’ tails in preparing soup for the homeless because it was inexpensive. When they realized the political significance of this ingredient, it became a focus of their work. Other groups jumped on this bandwagon, serving the soup in towns such as Strasbourg and Nice (and also in Belgium), a trend that worried the authorities, especially after the November 2005 riots. In December, Bonnivard reported, several busloads of police officers stopped her group from giving out the soup near the Montparnasse train station in Paris, citing “the discriminatory nature of the soup.” In response to Identity Bloc’s appeal, a Paris police spokesman said the appeal would be decided “on the basis of the current regulations, in particular concerning risks to public order and incitement to racial hatred.” Bonnivard sees this as part of an effort to defend European culture and identity. “Our freedom in France is being threatened. If we prefer European civilization and Christian culture, that’s our choice.”

Jan. 2, 2007 update: A judge at the administrative tribunal in Paris found no evidence that serving soupe au cochon meant discrimination against Jews and Muslims, so pork soup is back on the menu for the homeless of Paris. The police had shut down food distributions by Solidarité des Français on the grounds of xenophobia. The city’s police prefecture was ordered to pay ?1,000 in costs to SDF. SDF’s president, Roger Bonnivard, commented: “After weeks of dirty manoeuvres, intimidation, harassment, all kinds of pressure, and despite a new ban, the Paris police authorities now have to adhere to the decision. There are no legal grounds allowing anyone to ban pig soup.”