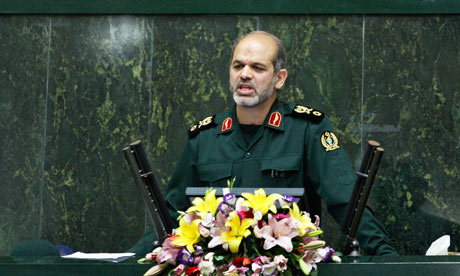 General Ahmad Vahidi delivers a speech to the Iranian parliament after being nominated as defence minister. Photograph: Vahid Salemi/AP

The Iranian parliament has approved the controversial nomination for defence secretary of a man wanted in connection with the murder of 85 people at a Jewish centre in Argentina.

General Ahmad Vahidi, who is wanted by Interpol, has been chosen for the post by Mahmoud Ahmadinejad despite international condemnation.

Vahidi faces charges in Argentina over his alleged role in masterminding the bombing of a Jewish centre in Buenos Aires in 1994. At the time, Vahidi was the head of the Iranian Revolutionary Guard’s al-Quds force.

The conservative-dominated parliament also approved Marzieh Vahid Dastjerdi as health minister, the Islamic Republic’s first female minister since the 1979 Islamic revolution. However, it rejected Ahmadinejad’s nominees for the energy, education, as well as welfare and social security ministries – two of them women.

Vahidi’s nomination triggered an uproar in Argentina, but the Iranian parliament, the Majlis, signalled its defiance yesterday as deputies chanted “death to Israel” when Vahidi addressed the chamber.

One member of parliament, Hadi Qavami, interrupted a speech by Vahidi to say he had initially opposed his nomination but had changed his mind after “the Zionists’ allegations” and would now vote for him.

Under parliamentary rules, two MPs can take the floor to oppose a ministerial nominee. No one did in the case of Vahidi, a sign the legislature will back him.

Vahidi said his country faced numerous security challenges, including the Israeli military, and he would improve Iran‘s defences and modernise its military.

The Argentinian government condemned Vahidi’s nomination as an affront to its legal system and to the relatives of the 85 victims and 150 wounded.

Vahidi has been on an Interpol “red notice” since November 2007, in connection with the car bomb attack on the Israeli-Argentine Mutual Association (Amia) building in Buenos Aires, the worst attack on a Jewish target outside Israel since the second world war.

Interpol’s red notices are alerts to its 187 member nations. They are not arrest warrants but are sometimes interpreted that way. Vahidi is one of five prominent Iranians sought by Argentina over the bombing.

Guillermo Borger, an Amia spokesman, said the nomination was “shameful and insulting”, according to La Nación newspaper.

The Argentinian prosecutor Alberto Nisman, who led the investigation into the bombing, said Vahidi was accused of being “a key participant in the planning” of the attack.

“It has been demonstrated that Vahidi participated in and approved of the decision to attack Amia during a meeting in Iran on 14 August 1993. Iran has always protected terrorists, giving them government posts, but I think never one as high as this one,” he said.

A spokesman for the US state department described Vahidi’s nomination as “disturbing”.

The al-Quds force is known for orchestrating Iran’s overseas operations, including working alongside Lebanon’s Hezbollah militant group, which is accused of carrying out the Buenos Aires attack on the instigation of Iran.