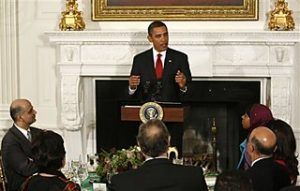 The dribble Obama read from his teleprompter to his Muslim guests the other night was in all the papers so the world can witness Americas new found love and respect for all things Muslim. I could pick his platitudes to Islam apart but what would be the point as they are glaringly obvious to most non-Muslims and I’m sure the cause of uncontrolled laughter by many Muslims. Here is one of Obamas gems; ” Indeed, the contribution of Muslims to the United States are too long to catalog because Muslims are so interwoven into the fabric of our communities and our country.”

What I will tell you though is who Mr. Obama invited into the White House.

According to the guest list printed in the L.A. Times, Dr. Ingrid Mattson, president, Islamic Society of North America broke bread with the ever appeasing president. ISNA was named as an unindicted co conspirator in the Holy Land Foundations terrorist fund raising campaign for Hamas. ISNA is also linked with the Muslim Brotherhood which is hell bent on the destruction of the west [especially America] from within its own governments and institutions. Could it be the White House staff are so inept at their jobs that Dr. Mattsons dubious past and present escaped their attention. Perhaps the secret service had the week off and was not able to double check who would stroll through the front door of one of Americas most secure locations.

I suppose your guess is as good as mine.