Some young women in Iraq are wrestling– with each other–in the gym. Clad in Nike and Adidas they put the learned moves into practice and defy the rigid theological pressure by clerics who demand their subservience. Despite a call for their slaughter, these Iraqis are willing to move beyond the threats and embrace greater democracy and equality.

From The New York Times. 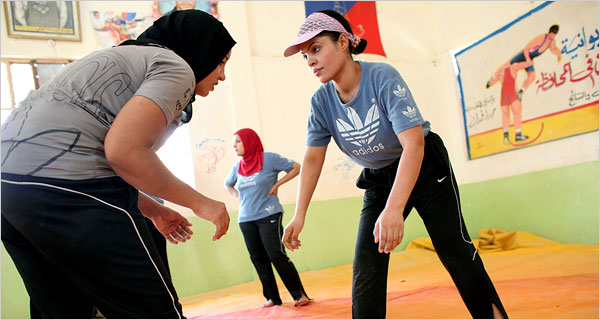 Samah Hamid, 24, right, squared off against her 22-year-old sister Masar during wrestling practice at the sports club in Diwaniya.

DIWANIYA, Iraq — It doesn’t happen much in the Arab world, but a coach here decided in January to start an all-female wrestling team, the first ever in Iraq. The wrestlers love it and already dream of competing in the Olympics.

Skip to next paragraph
Enlarge This Image 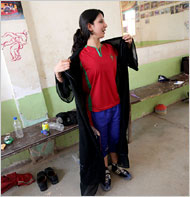 After a practice last month, Farah Shakir, 17, put on a traditional abaya over her wrestling clothes.

But there are many in this town south of Baghdad, which like much of Iraq is religious, conservative and governed largely by tribal tradition, who want the dozen girls and young women on the team to stop wrestling immediately. One tribesman has said they should be “slaughtered” if they continue. A Shiite cleric says the team should be banned because wrestling can lead to promiscuity and “transgressions” against Islam.

As a result of the pressure, four wrestlers have quit. But the rest, for the moment empowered by the post-invasion promise of greater democracy and equality, are defying the threats.

“They think we are loose girls just because we play sports,” said Ikram Hamid, 25, one team member.

Farah Shakir, 17, said, “It really is something different for Iraq, but I love the challenge.”

In fairness, it is not just female wrestling that troubles the traditionalists.

“I have information that male wrestling is problematic, too, because of all the friction that goes on,” said Sheik Hussein al-Khalidi, a turbaned cleric who sits on the provincial council.

But it is the women who have touched a nerve, perhaps partly because of their ambitions. Three other teams were set up in Iraq after Diwaniya’s was formed with the backing of Iraq’s wrestling federation. In June, all the teams took part in a championship, which the Diwaniya team won, qualifying for an Asian tournament in September in freestyle wrestling.

Some local people have become captivated by the female wrestlers and feel they are a fitting challenge to Iraq’s entrenched tribal and religious establishment, whose hold on society and people’s lives paradoxically became much tighter after the 2003 invasion. One supporter, Haidar Walid, 20, called the team a “sign of evolution and freedom.”

The controversy in Diwaniya underscores a fundamental struggle under way in Iraqi society as a whole. The grip of Sunni and Shiite armed groups that had compelled Iraqis to abide by what they considered moral behavior has loosened, and many people now feel free to express themselves in various ways. This was reflected during provincial elections in January, in which secular and relatively liberal parties did well.

On a recent scorching hot morning, the wrestlers, some veiled and others not, and dressed in shorts and soccer jerseys, filed into the wrestling gym at the Diwaniya sports club. They are allowed to use it only when male wrestlers have no practice.

A battered and dusty wrestling mat filled most of the room. The walls were adorned with framed photographs of male wrestlers, colorful posters of Shiite saints and the portrait of a local hero, Abbas Fadhel Jouda, an Iraqi wrestling champion killed two years ago by militiamen in Diwaniya because he was a police officer.

After a warm-up, Ms. Shakir and her teammates paired off and started practicing grapples and takedowns under the instruction of their coach and team founder, Hamid al-Hamdani, and his two assistants, all professional wrestlers.

Unlike Greco-Roman wrestling, freestyle wrestling allows holds below the waist and legs to be used for a takedown. It is an internationally recognized sport, but women’s wrestling made its Olympic debut only five years ago at the Athens Games. Two other Arab countries, Egypt and Morocco, have female wrestling teams.

But Diwaniya’s team may face more than the usual obstacles on the road to gold. Iraq’s wrestling federation endorsed the team, but an official from that body refused to come to Diwaniya for the competition in June, fearing he would be killed, according to Mr. Hamdani.

In May angry tribal leaders petitioned the provincial council to ban the team after a television station showed one of the wrestlers practicing with her coach.

Since then the team has kept a low profile, abiding by local customs. During practice the girls are chaperoned by Ms. Shakir’s mother, Nawal Kadhim, and when they leave the club they are covered in head-to-toe black veils.

Still, many are taunted and cursed whenever they venture to the market. They are ostracized at school and constantly hectored by their teachers.

Mrs. Kadhim, who has five daughters on the team, was recently advised by relatives to leave Diwaniya and received threatening messages on her cellphone.

“Women will lose their femininity,” said a resident, Faris Abbas, 42, who like most opposes the female team.

A tribal leader, Gaith al-Kassir, 53, says the sport is against Islam and tribal traditions. “Women can do sports at home,” he said.

As with many other issues, Shiite religious leaders are divided on female wrestling. Some say there is no harm as long as the women are properly covered, while others say it is “absolutely forbidden,” according to one of the team’s coaches, who consulted the religious authorities in the city of Najaf.

Sheik Khalidi says he will continue to rally public opinion until the wrestling club is closed down. He is a member of the Islamic Supreme Council of Iraq, which is a religious party close to Iran and ruled the province until January’s elections, when it lost to Prime Minister Nuri Kamal al-Maliki’s party throughout the south. Although Mr. Maliki is an Islamist, his party has favored persuasion over coercion when it comes to shaping society’s values.

Despite the setback at the polls, Sheik Khalidi said his party was still convinced that Iraqis were becoming more conservative and attached to Islamic rituals and values.

Batoul al-Attiyah, a local physician, said she disagreed with Sheik Khalidi’s assessment of where Iraq was heading, even if she opposed female wrestling.

“Religion has become more about appearances than substance,” she said.