Story from ABC.NET where there are videos and audio on this story and aspects of it. 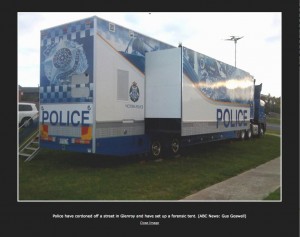 Five men being questioned over an alleged terrorist conspiracy had sought a religious ruling to authorise an attack in Australia, a court has heard.

Their arrests come after a seven-month counter-terrorism operation and police raids across Melbourne this morning.

It is alleged five men were planning to carry out an armed attack on the Holsworthy army base in Sydney.

The Melbourne Magistrates Court heard some of them discussed obtaining a religious ruling from overseas or interstate in support of their alleged plans.

One of the suspects, Nayef El Sayed, 25, of Glenroy, has been charged with a terrorism-related offence.

During his brief court appearance he sat behind a window and refused to stand to acknowledge the magistrate because, as his lawyer explained, his religious beliefs meant he felt he should only stand for God and not a man.

He did not apply for bail and was remanded in custody to face court again in October.

Federal Police also won an application to further question three other suspects who appeared in court today but have not been charged.

Victorian Magistrate Peter Reardon acts of terrorism in Madrid, Mumbai and London have struck at the heart of democratic society and investigators should be allowed to fully investigate such serious allegations.

A fifth suspect is in custody on other matters.

About 400 law enforcement officers took part in the series of raids that led to today’s arrests.

The 19 raids took place across Melbourne and regional Victoria.

He says more arrests are possible.

“There are further inquiries being conducted both in Australia and overseas,” he said.

“Our assessment of the terrorist threat in Australia is that it comes from a small number of individuals who should in no way be taken as a wider reflection of any group within Australian society,” he said.

But he says today’s events are a strong reminder of the security threats facing the nation.

“The threat of terrorism is alive and well and this requires continued vigilance,” he said.

Some of those arrested have a Somalian background and Islamic groups are urging people not to seek retaliation against Melbourne’s African community.

Shereen Hassan, the vice-president of the Islamic Council of Victoria, says Muslims have been shocked by the raids and are calling for calm amid fears of a backlash.

“But we have faith that the overwhelming majority of Australians will not react in this way and remain calm,” she said.

“[We] urge the wider community and the media to respect the privacy of the families concerned.

“The overwhelming majority of Australian Muslims unequivocally condemn all forms of terrorism.”

Mohamed Baaruud from the Somalia Advocacy Action Group says the community cannot believe some Somali Australians have been implicated.

“We are all shocked,” he said.

“This is the last thing we were expecting.

“Our community came to Australia about 17 years ago when the civil war started in Somalia and it took us a long time to recover from the trauma that we have experienced in our country of origin and start a new life here in Australia.”

Doctor Jamal Rifi from the Lebanese Muslim Association says the authorities are to be congratulated for preventing the alleged attack.

“We’ll do our best for anyone who will have any information to actually contact the relevant authority and to work cooperatively to uncover any or similar events that may take place,” he said.

New South Wales Police Commissioner Andrew Scipione says authorities feared the group was planning to carry out its attack in the near future.

“It was likely imminent and that was part of the reason behind moving as we have,” he said.

NSW Premier Nathan Rees says he is satisfied the security at Sydney’s Holsworthy Barracks is adequate.

Mr Scipione says security at the barracks was stepped up earlier this year, shortly after police became aware of the alleged plot.

Private guards are in charge of perimeter security at Holsworthy and other army bases.

Mr Rees says he has no problems with the arrangements in place at the state’s military facilities.

“I have every confidence that the Australian Defence Force is more than adequately capable of looking after their assets, their bases and so on,” he said.

Meanwhile, Victoria Police is also investigating The Australian newspaper for publishing details of the raids about the time they were occurring.

Police claim the story was available before some of the arrests took place and could have compromised the operation.

But The Australian says the story only ran in its late edition which was not available until after the raids.

It says its online publishing schedule was altered to ensure the story was not made public until the raids had occurred.

Victoria Police Chief Commissioner Simon Overland says he will investigate the timing of the story.

In other developments, a Somali community leader and Islamic scholar says he warned the Federal Government two years ago that a terrorist incident could occur in Australia.

Dr Herse Hilole, now a resident academic at the International Islamic University in Kuala Lumpur, told The World Today that he has expected such activities.

“My suspicion was that young Somali Muslims could be or may be used in the future to carry out some terrorist activities in Australia,” he said.

He criticised the Federal Government’s response to his warning.

“The response at the beginning was good, but the current government of Australia … [it] seems that they did not take this seriously,” he said.

“I proposed last year a project to help this situation, but my project was rejected by the Government.”