At least two improvised explosive devices detonated in the Mega Kuningan business district of Jakarta, Indonesia, early on July 17, near the Ritz-Carlton and Marriott hotels, with one report describing extensive damage to the front facade of the Ritz. Several foreign embassies are reportedly also located in the area. Local reports describe witnesses observing white smoke coming from several structures, while other buildings were being evacuated.

Further details are sketchy at this point. It is unclear exactly where the devices were placed or how large they were, though some photos of the Ritz show damage that would be consistent with a small device being detonated inside. Early casualty reports described four people killed, though if the damage to the Ritz-Carlton is as extensive as described, the casualty count will likely rise. STRATFOR will continue to update its reporting of the situation as details become available. 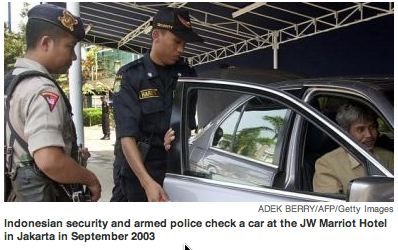