Personally I believe that Barbara Kay is right and Sarkozy is wrong. Sarkozy is attacking the symptom and not the disease. By doing so, he risks driving underground the identifying marks of the disease, Much like finding a way to stop the plague from producing pustules would be, which nearly guarantees all will die of it. Islam must be made illegal exactly as Shintoism was in WW2. Just removing the freedom to wear what you want as a token move for women’s rights is frankly worse than doing nothing. At least if you do nothing eventually the public will get fed up and angry enough to actually do something in the absence of government action on the behalf of liberal values and indigenous Western peoples.

If sarkozy’s plan is effected, people won’t know who is seething with hatred and contempt for the nations they live in. Real racism may result as people start to suspect all South Asians or Arabs of harbouring anti French sentiments as opposed to those clearly Muslim irrespective of their ethnicity tribe or pigmentation level. 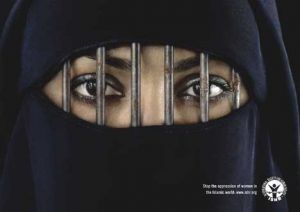 In his June speech in Cairo, U. S. President Barack Obama said that Westerners should “avoid dictating what clothes a Muslim woman should wear.” On the other hand, French President Nicolas Sarkozy says that burkas and niqabs, both of which cover the face, are a “debasement” of women and shouldn’t be permitted in France.

Sarkozy, of course. France has done a lot of dumb things vis-a-vis the Arab world, but on the “cover” issue, which has nothing to do with women’s choices in clothing and everything to do with Islamist aggression, France got it right when it banned the wearing of hi-jabs in schools in 2004.

Post columnist Jonathan Kay took Obama’s side in the debate, arguing on June 23 that it is “part of the liberal tradition to wear what you want, pray how you want and generally conduct yourself as you please — providing you don’t harm others.”

Jonathan Kay wears what he wants, but if he wanted to wear nothing at all in public, our liberal tradition would not support that choice. Although not set down in legal codes, human beings in social groups are hard-wired to find a psychological comfort zone within a spectrum of decency. Full nudity is not accepted in any society at all.

At the other end of the spectrum is full coverage. Full nudity arouses discomfort because the naked human is seen as animal-like, and therefore less than human. Full coverage arouses discomfort because the wearer is depersonalized and therefore non-human as well. No rational human being chooses full nudity in the presence of strangers. No woman, left to her own devices, would ever choose to wear a burka.

Mr. Kay also compares the wearing of the burka to the shaven heads and full body coverage of Hasidic Jewish women. He points to the slippery slope of banning one and not the other. But there is a huge difference between full body coverage by diverse ordinary clothing chosen by the wearer, and a uniform.

Indeed, Hasidic women and Hasidic men wear very similar uniforms. So in that sense, although their garb may seem outlandish to us, the discomfort is equal.

Moreover — and here is the real point — any one of these Hasidic women could walk away from that lifestyle without fear of being beaten or killed. The compulsion to conform in the Hasidic community is strictly social. And Hasidim do not interfere with other people, or attempt to impose their own standard of modesty on the general public.

By contrast, there are now places in France and Scandinavia where non-Muslim women are covering their heads in order to protect themselves from aggression. So coverage is no longer, in many places, a matter for one cultural community. There are very worrisome political implications to all citizens in its widespread practice.

Clearly, there are many Muslim women who freely choose head cover, and perhaps body but not face cover, to express their religious sensibilities. But to assume that the burka would be freely chosen by any woman is crazy.

Liberals are so hellbent on fitting the burka into their pretty multicultural template that they would turn their eyes away from what is effectively ongoing torture. They pretend that the burka is simply an article of clothing, rather than an animated prison that has been imposed, not chosen.

So I offer a challenge to these liberals: I suggest that they wait for the hottest day of the summer, and then put on a parade in downtown Toronto–let’s call it “Burka Pride.”

In this parade should march — be forced to march — every single feminist and media commentator who has argued for the right of women to wear burkas. Naturally all of them will be wearing a burka themselves — men and women both. Let them march and march as the sun beats down on them, as the humidity drenches them in sweat so that they are sure they will suffocate.

Then, when they are released from these hellish, dehumanizing cells, we’ll see if they are still so determined to uphold our great liberal tradition of “wear what you want.”

One Reply to “Barbara Kay: France liberals and the Burqa”