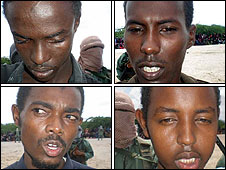 Hardline Islamists in Somalia have carried out double amputations on four men for stealing phones and guns.

They have each had a hand and foot cut off after being convicted by a Sharia court in the capital earlier this week.

More then 300 people, mainly women and children, watched as masked men cut off their limbs with machetes.

The four men reportedly admitted to the robberies, but were not represented by a lawyer and were not allowed to appeal against their sentence.