I have written on this many times in the past year on Vlad but now I am making a direct challenge to artists who think they are ‘risque’ and so dangerously counter culture.  You know who you are. You did the ‘Piss Christ’ and made millions for something as banal as putting a crucifix in what looks like a jar of urine. You must feel so very brave when you insult millions of people you know won’t ever actually do anything beyond write an angry letter to the gallery, galleries which we know will benefit massively by the publicity. 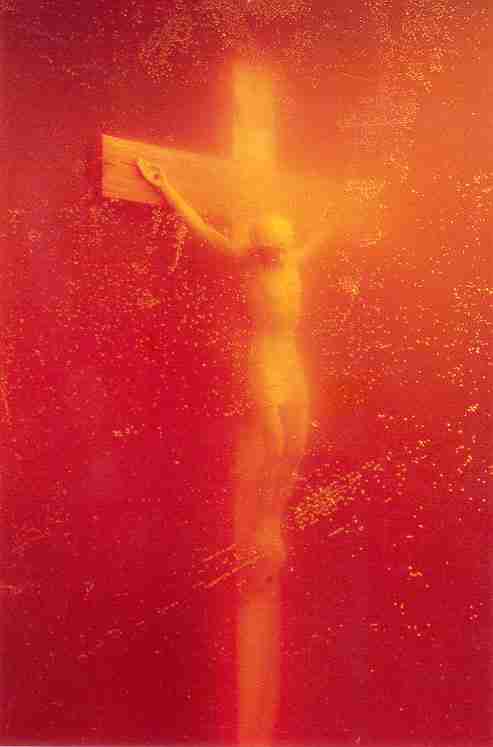 It’s about as brave as lampooning the Dalai Lama. Reminds me of when I see a brave soul at a bar with a T shirt that has a picture of Jesus on the cross and it reads “Jesus. He did it for the chicks”. That isn’t even funny which is the only actual crime here. Before 9-11 an ex girlfriend of mine had the idea to do a T shirt with a Jesus on the cross wearing nike’s. The top would read,

And the bottom would say ‘The Original Cross Trainer’

I don’t know if she ever made that shirt but at least it’s funny. Would still be gutless in the cold and fading light of the age of reason but at least its funny.

But on to my challenge.

Hey artists out there who have enough track record that a gallery will actually take  you seriously. Yes I know how it works in the art world, it has sweet fuck all to do with how good you are but how much street cred you have because you offended the ‘right’ people. Yes by that I mean offended the ones who won’t do anything to harm you and represent anyone who has actually accomplished something on this earth. So long as you have offended them while promoting the most base and counter civilized impulses you probably can get tons of government money from various art galleries.

So let’s see if you have any real balls.

Let’s see if you will make something like this: 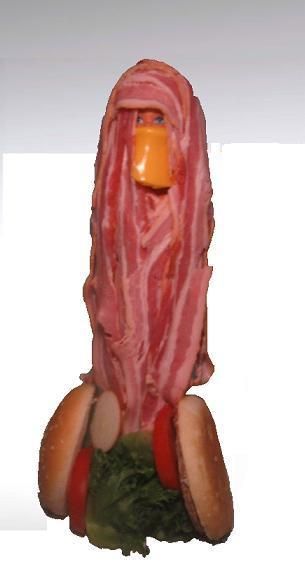 The Bacon Cheese Burka. Why not actually do an art piece offensive to the one religion which really does subjugate women to second class status? more accurately to non person status altogether actually.

Why not show us how brave and counterculture you are by making a sculpture of a twice life size women in full Bacon cover with a cheese veil demonstrating the utter horror that is life in the Islamic world.

Think of it as a cross between the Piss Christ and the Meat dress. You can’t go wrong! You may even be as famous as that Canadian asshole who does the blood X. I say asshole because he actually sprayed blood from a squeeze vial from his rectum to make an X on real works of art which require actual talent and skill, something anathema to the post modernists.

Artists show some real balls and in the process, actually do what artists are supposed to do.

Social commentary to achieve greater freedom for all humanity.

3 Replies to “A challenge to artists world wide.”