An amazing event happened in Canada’s capitol last night. Amazing for not just the obvious reason that it was an all star night of those few who fight for truly liberal values such as Mark Steyn, Ezra Levant and many others who fight bravely, not fearlessly but bravely (for those who fight fearlessly have no clue how bad things are for all of us) but because so many who did attend and are in positions to influence to some degrees Canadian policies so warmly embraced the views expressed.

This was not xenophobia. Those who attended this event included people like Fred Litwin, a man who runs Gay and Right, an exceptional blog defending liberal democratic values while promoting the rights of gay people to live free of fear of state and Islamic persecution as well as people from a very wide berth of humanity having in common the clear understanding of the threats to freedom of speech and freedom of the individual in today’s world.

This was indeed speaking truth to power and I was truly astonished to see power embrace it. A bright spark in a sea of darkness.

I also had the opportunity to speak to Canada’s minister of Immigration Jason Kenny and was shocked by the combination of lucidity intellect and humility. Qualities which in a politician are historically rare. 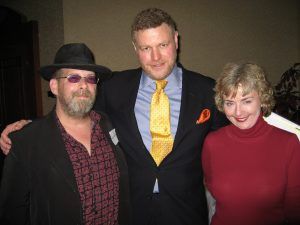 Mark Steyn and Kathy Shaidle of Five Feet of Fury and another fellow. Mark is in the middle. Rumor has it the other fellow is also a blogger.

Canada has at this time I can say, and with a great deal of surprise, a government it can be exceptionally proud of. Sadly it is a minority. Fashion dictates politics and not reality and reality is seldom in fashion. But for the moment, and especially for one night, as a Canadian I felt a great sense of pride in my nation, its policies, and its policy makers. Who knows, at this rate we may see the end of Human Rights star chambers and the thuggery of the state against unfashionable opinions and speech. 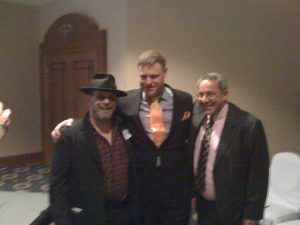 On the right, Fred Litwin who also started the group ‘Free Thinking Film Society’ which brings in to Theaters in Ottawa films which the new orthodoxy would never dare show. Films such as ‘Obsession’ Radical Islam’s war with the west, What Black men think, which got a standing ovation from a mostly black audience and a film about Che Guevera which showed him as the murderous thug he actually was no matter how good he looks on a T shirt.