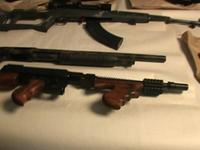 A man with bikie-gang links has been charged after a raid on a Sydney unit uncovered military weapons, bulletproof vests and police uniforms, police say.

Detectives from NSW Police and the Australian Crime Commission (ACC) raided the unit in Belgrave Street at Kogarah at 7.30am (AEST) on Friday, acting on ACC intelligence about high levels of pseudoephedrine sales in Sydney.

Detectives from the Middle Eastern Organised Crime Squad arrested a 20-year-old man at a cafe in Kent Street in the CBD following the raid.

He was questioned at St George police station, where he was later charged with one count of possessing more than three unregistered firearms, one being prohibited.

A police spokeswoman alleged the man was associated with a bikie gang, but would not say which gang or whether the unit was a bikie property.

The man was refused bail to appear at Parramatta Bail Court on Saturday.

‘Community safety is a No.1 priority for police and weapons such as these can prove fatal in the wrong hands,’ Det Supt Begg said in a statement.

‘The possession of illegal weapons and drugs is a crime and the NSW police force will remain committed to targeting these offences.’

Detectives from the gang squad were also involved in the raid.