The Prime Minister declared that Pakistan ‘has to do more to root out terrorist elements in its country’ in the wake of the revelation that 11 of the 12 suspects had travelled to Britain from the country.

But at least 10 of the 12 were allowed to enter by the Home Office after successfully applying for student visas. 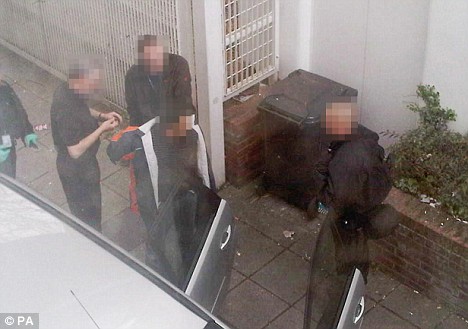 Arrests: Police arresting a man at the library of Liverpool John Moores University following a series of terror raids in the north-west. At least ten of the 12 arrested were on student visas

As security forces in Britain carried out a desperate search for the terrorist bomb factory, Pakistan’s High Commissioner to the United Kingdom said it was the UK that was guilty of not doing enough to carry out security checks on foreign students.

Wajid Shamsul Hasan said Pakistani authorities could help carry out background checks on student visa applicants but were not allowed to.

The row will leave Mr Brown red-faced amid increasing concerns the Government has ignored repeated warnings about the dangers of both the student visa rules and bogus colleges.
> 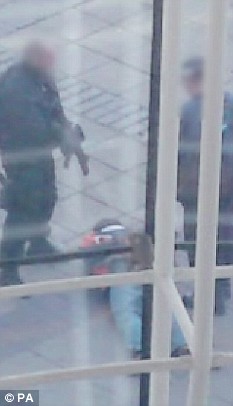 Threat: Another man is arrested by armed police during the series of raids

At the same time, it appears a supposed 2007 crackdown on bogus colleges – which charge foreign students thousands of pounds for fake academic courses – failed to detect the suspects seized this week in the North-West of England.

Only one is understood to have been studying at a reputable institution. Officials also believe they lied about their financial resources to evade a Home Office test of their ability to pay for their studies.

Immigration Minister Phil Woolas insisted today that foreign national students were checked against watchlists of criminals and suspects from other countries.

‘It’s naive to think that we don’t check, we do work very closely with the Pakistan authorities, indeed we’ve been criticised for doing so,’ he said – only a week after he said student visas were ‘the major loophole in Britain’s border controls’.

He told BBC Radio 4’s PM programme today that there were 285 million people coming in and out of the country every year, including nearly 400,000 issued with student visas.

‘We do have these systems of checking these people to the best of our ability and we are acknowledged in international police circles as being one of the best in the world,’ he went on.

Mr Woolas said he had no detail of the arrests from this week but ‘the fact of the matter’ was that the individuals had been identified.

‘But the serious point that the opposition parties and other commentators must address is that if they continue to oppose our electronic borders system, then not only will there be loopholes, there will be a gaping chasm and we would not be able to protect the public.’

He added: ‘We do under the new tougher points-based system of course have paper checks and people have to provide documents, but we also use intelligence from our own services and from overseas countries in a targeted way exactly as has been suggested by the High Commissioner and David Blunkett.’

The Home Office stressed yesterday that all students are checked against terror ‘watch lists’ and must be sponsored by a registered university or college.

The most notorious terror ‘students’ was Dhiren Barot, said to be Osama Bin Laden’s ‘UK general’, who was jailed in 2006 for planning terrorist attacks.

Shadow Home Secretary Chris Grayling warned last night: ‘Given these latest revelations, we need to urgently step up monitoring of applications from parts of the world where we face terror issues.’

The search for the terrorist bomb factory is being concentrated on a rundown block of flats east of Liverpool city centre, The Times has reported.

The terror suspects were being questioned last night amid reports that they had planned a massive bomb attack within days, possibly as soon as Easter Monday.

Some had been seen by surveillance officers filming shopping centres in Manchester, which would be packed on a Bank Holiday. 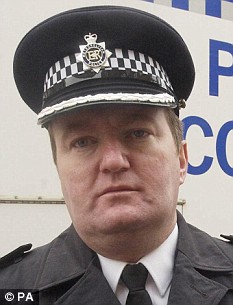 Sultan Sher was arrested at the Cyber Net cafe in the Cheetham Hill area of Manchester, alongside a man known as Tariq.

Abid Naseer was arrested at a house in the same area, while one of his housemates, Hamza Shenwari, was arrested on the nearby M602.

Abdul Khan was arrested in Liverpool, as was John Moores University student Muhammad Adil, who was later released.

The 14 raids, in Greater Manchester, Lancashire and Merseyside, had to be brought forward after police anti-terror chief Bob Quick was photographed holding a secret document detailing the targets.

Exploiting the student visa loopholes would be a frightening new tactic for Al Qaeda.

Students from abroad require a bank statement showing enough cash to pay fees of £10,000 or more a year, plus £6,000 living costs.

With the Pakistanis all believed to originate from poor tribal regions, there are suspicions that funds may have been provided directly by Al Qaeda or the Taliban.

Far from studying, at least four of the men had been working as security guards. One had told neighbours he was attending a college which has actually closed. 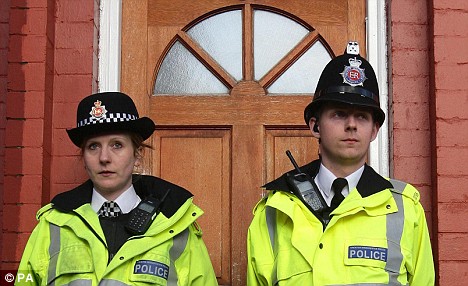 Raids: Police at the scene of an address in Manchester

Police are said to have moved in on the suspects after uncovering coded emails and internet ‘chatter’ indicating that the suspects were close to an attack.

They had been seen photographing or filming at four possible targets in Manchester – St Ann’s Square, the Arndale Centre and Trafford Centre shopping complexes, and the Birdcage nightclub.

A Manchester police official said: ‘Even though specific targets were never mentioned in their email chatter, these men were no tourists, and taking these pictures was highly suspicious.’

Greater Manchester Chief Constable Peter Fahy said: ‘They were a highly credible threat. Several dates listed on emails indicated a strong chance they may have moved in the next ten days. We had to take action’

Anti-terror investigators believe some of the men, whose ages range from teenagers to 41, received training in the terrorist camps of Kashmir and the Pakistan tribal areas.

Officials believe the cell represents a major change in the threat to Britain.

The July 7 suicide bombings and other recent foiled plots have all involved British-born terrorists. But most of those currently held are from Pakistan.

Investigations are said to be going on in Pakistan where officials said yesterday they had given British authorities the names of 36 of their citizens suspected of having trained in terror camps and now being in the UK.

The list is said to have been compiled by the ISI, Pakistan’s intelligence service.

The suspects are believed to have been trained in South Waziristan by the radical group Jaish e Mohammad.

The group was linked to the British terror suspect Rashid Rauf, believed to have been killed in a U.S. missile strike.

The revelation that the suspected terror cell was imported into Britain by an apparently legal route is a huge embarrassment for ministers.

Any migrant wanting a visa is supposed to undergo rigorous checks. They are also checked against terror watch lists.

But there have been a series of warnings, dating back to at least 2005, that checks are not sufficiently robust.

The Al Qaeda suspects who pose as security guards

Members of the suspected Al Qaeda cell may have been working as security guards to make it easier to access high-profile targets, it emerged yesterday.

At least four of them were employed as security men, two at a large hardware store where the gang would have had access to potential bomb-making materials.

Last night, staff at the new branch of Homebase in Clitheroe, Lancashire, said they had been ordered to carry out a stock check.

It was focusing on materials such as fertiliser and flammable household liquids which could have been used for a bomb. The two men were staying at a local bed and breakfast, which was also searched.

They were employed by a Newcastle-based company called Sky Interserve UK, acting as a sub-contractor for the Essex firm Manpower Direct

They were also believed to be studying the Koran and worshipped five times a day at a nearby mosque, the Al-Falah Islamic Centre.

Neighbours said they were Pashtuns, originally from Afghanistan, and aged around 30 and 40.

One Muslim woman living nearby said they had criticised her for not wearing a full veil, telling her she was ‘immodest’.

Another neighbour, Mohammed Ashraf, said he knew the older man.

He said: ‘He works as a security guard but he also travels around a lot – here, Birmingham, London. He runs market stalls selling fruit and vegetables.’