From The Edmonton Journal: 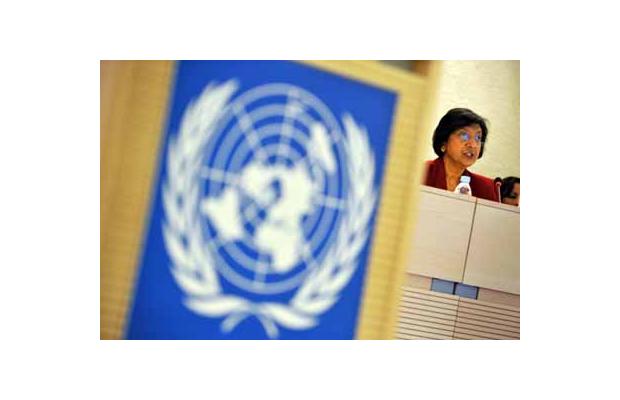 UNITED NATIONS — Egypt sought to outmanoeuvre Canada at the United Nations Human Rights Council Friday as it began pushing for a “free-speech” resolution the West says deviates from traditional norms.

Egyptian diplomats effectively hijacked the recurring measure Canada has traditionally sponsored by acting three months before their Canadian counterparts were preparing to move.

UN practice dictates the first version of a resolution to be tabled sets the course for subsequent negotiations, meaning Canada and the West would face an uphill battle to get the changes they want. But the office of Foreign Affairs Minister Lawrence Cannon said late Friday in response to inquiries from Canwest News Service that Canada intends to sponsor its own draft resolution anyway.

Officials noted the Egyptian draft is only “circulating” among the 47-members states of the council, though it is expected to be “tabled” within days.

“Canada will continue to speak out against limitations in freedom of speech at all levels. While there is not yet a resolution tabled, Canada has in the past made it clear that it will not support any text which would undermine this fundamental right,” said Catherine Loubier, spokeswoman for Cannon.

The Canadian declaration sets the stage for a showdown in the Human Rights Council, which the UN General Assembly launched in 2006 to replace the discredited Human Rights Commission after that body had become dominated by countries with poor human rights records.

But even in the new body, Western countries are outnumbered, while the United States has yet to stand for election.

Canada long ago took lead on tabling successive freedom of expression resolutions in the commission, and also played an instrumental role in establishing in 1993 the mandate of a UN free-speech watchdog — called a Special Rapporteur.

The measures are not legally binding, but enter the international record. As such, human rights groups say authoritarian governments could use a resolution along the lines of the Egyptian text to justify targeted crackdowns.

“If Egypt tables and maintains a text in March, Canada will have to take a position on it. If it is not acceptable, we will not support it,” Loubier said.

The Egyptian draft expresses “concern” at what it calls a “rise of instances of abuse,” and highlights a need for “limitations.” It also calls on countries to co-operate with the Special Rapporteur by handing over “all (requested) necessary information.”

“The text of the (Egyptian) resolution is pretty much what one would expect from a country that throws its bloggers in jail for no reason at all,” said Hillel Neuer, executive director of the Geneva-based monitoring group UN Watch.

Some of the measures appeared for the first time as amendments to a Canadian-tabled free speech draft last year that ended up redefining the special rapporteur’s duties. In that contest, Pakistan and Egypt, as well as critics of the West such as Cuba, won sufficient backing from like-minded council members to force changes that led Canada to drop its sponsorship.

“Last year, the repressive regimes that dominate the council inserted two subversive amendments; this year they’ve taken over the whole resolution, with the result Western states are playing defence and losing,” Neuer said.

Western diplomats in Geneva said privately they knew Egypt was considering its Friday move, but decided to respect an additional tradition of waiting for the special rapporteur to file his report, which is expected in June. Loubier said it remained “appropriate” to wait until then.

One diplomatic source said Marius Grinius, Canada’s ambassador to the UN in Geneva, had in advance “complained forcefully” to the Egyptian ambassador, as had other Western diplomats. This source also said the group had yet to agree on whether Canada would take the lead this year.

None of the diplomatic sources agreed to be identified because most of the negotiating over texts takes place behind closed doors.

The Egyptian move surprised a number of observers.

Several of the Egyptian measures relate to speech affecting religion.

“This is moving down the road of incorporating anti-blasphemy laws into freedom of expression protection and international law,” warned Bennett Graham, international program director with the Becket Fund, a think-tank aimed at promoting religious liberty.

According the Western diplomatic source, Islamic countries on the council had sought a deal in which the West would refrain from tabling a draft resolution on religious freedom in exchange for a promise by the Islamic group to leave the free speech resolution to the West, and hold off on tabling a text on combatting defamation of religions.