How can Obama navigate the U.N. without stepping on Iranian land mines? Forbes.com 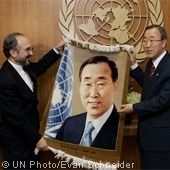 With Iran racing down the homestretch toward a nuclear bomb, the United Nations Security Council has spent more than two years expressing “serious concern.” By now, Iran is under U.N. sanctions, and in flagrant violation of five Security Council resolutions demanding that it stop enriching uranium. If anything, as a chronic abuser of the U.N. charter, Iran’s despotic, terrorist-backing, nuclear-wannabe regime ought to qualify for expulsion from the 192-member U.N. At the very least, one might suppose that on U.N. premises, Iran would be something of a pariah.

But at the U.N., that’s not how it works. Although Iran lost its bid this year for a seat on the 15-member Security Council, Iran’s government has the U.N. so well-wired, in so many ways, that it’s hard to find an angle Iran is not busy exploiting. That ought to be of serious concern to President-elect Obama, who has promised to give the U.N. a far bigger role in U.S. policy.

As it is, America provides the main U.N. premises in New York, suffers the related traffic jams and tries to ride herd on the alleged spies (two Iranian guards at Iran’s U.N. Mission in Manhattan were deported in 2004, after they were seen filming landmark buildings and parts of the transportation system). American taxpayers bankroll roughly one-quarter of the U.N.’s total budget, now swollen to well over $20 billion, and on top of that look likely to get stuck with the $2 billion-plus tab for the renovation now underway of U.N. headquarters.

Meanwhile, Iran, which pays a paltry 0.18% of the U.N.’s core budget, or less than 1/100th of the U.S. contribution, has wangled itself an astounding array of influential U.N. slots, which by next year will include seats on the governing bodies of at least eight prominent U.N. agencies. That setup serves both to legitimize the same Iranian regime that is busy violating the U.N. charter, and gives Iran a say in how billions in U.N. funds–much of that money supplied by U.S. taxpayers–get spent around the world.

For a glimpse of this setup, you don’t have to wait for Iranian President Mahmoud Ahmadinejad’s annual rant on the U.N. General Assembly stage. All you have to do is stroll through the main visitors’ lobby of the landmark U.N. building in Manhattan. In that lobby, by far the most prominent display is a row of eight portraits, framed in gold, and showing the lineup of secretaries-general from the U.N.’s founding at the end of World War II, through the current Ban Ki-Moon. But these are no ordinary portraits. Each is actually a silk carpet, and under the woven picture of each secretary-general, there appears the woven inscription: “Presented by the Islamic Republic of Iran.”

The first seven of these carpets were accepted from Iran en masse by former Secretary-General Kofi Annan in 1997. The eighth, depicting Ban Ki-Moon, was accepted by Ban last year and placed beside the others. And though the U.S. State Department seems oblivious to this use of the U.N. lobby as a showcase for Iranian gifts tailored to flatter the secretariat’s top boss, it’s a good bet that both the Iranian delegates and Ban are aware, when they look at those rug-portraits, that beneath the name of each secretary-general is inscribed the name of Iran’s Islamic Republic.

But that’s just the lobby. Next year, Iran is slated to begin a three-year term on the 36-member executive board of the U.N.’s flagship agency, the U.N. Development Program, or UNDP. The UNDP fields a presence in 166 countries and disperses some $9 billion around the globe every year–$5 billion from its own budget, and another $4 billion on behalf of other U.N. operations. The UNDP is the agency that early last year, when North Korea was rounding out a term on its board, became embroiled in the cash-for-Kim scandal–in which it turned out that the UNDP, in violation of its own rules, had been serving both as a source of hard cash for the rogue nuclear state of North Korea and as a money laundering vehicle for North Korean weapons and nuclear proliferation networks.

Iran’s seat on the UNDP board will automatically confer seats on the governing boards of the U.N. Population Fund (UNFPA) and the U.N. Development Fund for Women (UNIFEM). Iran also sits on the governing bodies of the U.N. Agency for Human Settlements (U.N.-Habitat), and the U.N. refugee agency, the UNHCR. While board memberships entail broad decision-making powers rather than hands-on management, in the U.N. system, such seats can confer a handy advantage in the backroom deals that are the real basis of U.N. business.

On the climate front, which the U.N. is currently turning into a multibillion-dollar global business, Iran is also an executive player. Iran has a seat until 2011 on the governing council of the U.N. Environment Program (UNEP) in Nairobi. An Iranian serves on the governing council of the Global Environment Facility, based in Washington. And an Iranian serves as the first vice-president of the executive council of the World Meteorological Organization in Geneva–where Iran is also one of 49 members of the U.N. Disarmament Conference.

At the U.N.’s Food and Agriculture Organization in Rome, a veteran Iranian diplomat, Mohammed Saeid Noori-Naeini, chairs the 49-member governing council. The FAO has a budget of more than $850 million per year, to which the U.S. contributes the biggest single share. Iran also sits on the executive board of the related U.N. World Food Programme (to which the U.S. last year contributed more than 40% of the WFP’s $2.7 billion in global expenditures).

With all that Iranian involvement in the U.N.’s programs for global food distribution, it’s no surprise that Iran’s President Ahmadinejad flew to an FAO food security conference in Rome this past June, where he used the FAO platform to urge “the formation of an independent and powerful body, obeyed by all countries, to justly regulate the food market and organize all its related issues from production to consumption.” Lest anyone wonder who might qualify to run such a mighty regulator of the world’s entire food supply, Ahmadinejad went on to urge universal efforts to achieve “the coming to power of pure and monotheistic managers.”

Iran was also the original sponsor of a 2001 U.N. initiative called the Dialogue of Civilizations. Proposed by former Iranian President Mohammad Khatami and embraced by Kofi Annan, this “dialogue” was then transformed in 2005 into its successor, the New York-headquartered Alliance of Civilizations. The Alliance features a 20-member panel of “eminent persons” including Iran’s Khatami, who in September 2006 made use of this connection–as Iran was thumbing its nose at one of the Security Council ultimatums on uranium enrichment–to visit the U.S. and deliver a series of anti-American speeches. The Alliance is part of the campaign now gathering steam at the U.N. to impose Islamic anti-blasphemy laws worldwide, gagging free speech.

Inside Iran, the U.N. fields big operations, including a UNDP office staffed largely by Iranian nationals, and an office of the U,N, cultural organization UNESCO, which serves as a hub for UNESCO operations not only in Iran, but in Turkmenistan, Pakistan and Afghanistan. Iran is also one of the 43 countries in which the U.N. this year offered exams to recruit new members to its global, professional staff.

Iran is not on the governing board of the Vienna-based International Atomic Energy Agency (though some of its pals, such as Cuba and China, are). But last year, the office of the Iranian ambassador to the IAEA did take advantage of the Vienna location to place an ad in the International Herald Tribune, soliciting bids to build two new nuclear reactors in Iran. To get the bidding specs, interested parties were asked to pay a nonrefundable fee of 15,000 euros into an account at Bank Austria Creditanstalt–which, for the convenience of U.N. personnel, maintains banking facilities on the premises of the U.N.’s Vienna office complex.

Beyond that, Iran holds influential spots on the two most powerful, overlapping lobbying blocs inside the U.N. General Assembly: the G-77 and the Organization of the Islamic Conference. That latter position is how Iran’s ambassador to the U.N. in Geneva ended up as one of 19 vice-chairs of the preparatory committee for the U.N.’s 2009 conference on racism.

The above list of Iran’s doings at the U.N. is far from comprehensive, but you get the idea. If Obama is still banking on tough diplomacy to stop Iran’s race for the nuclear bomb, there are really only two ways to deal with this U.N. minefield: He can start by trying to kick Iran out of the U.N., or he can bypass the U.N. altogether.

Claudia Rosett, a journalist-in-residence with the Foundation for Defense of Democracies, writes a weekly column on foreign affairs for Forbes.com.