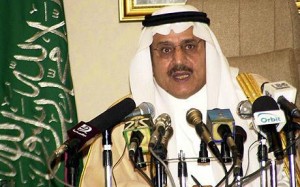 One of Saudi Arabia’s most conservative Princes has moved closer towards the throne, casting a shadow over the Kingdom’s tentative reforms.

Telegraph By Richard Spencer in Dubai

Prince Nayef bin Abdul-Aziz, the interior minister and a half-brother of King Abdullah, has assumed second place in the line of succession. His appointment as second deputy prime minister places him next in line after Crown Prince Sultan.

Because King Abdullah is about 84 and the Crown Prince is of the same vintage and in poor health, this makes Prince Nayef highly likely to succeed to the throne. He will take temporary charge of Saudi Arabia while the King attends the G20 summit in London and Crown Prince Sultan recovers from surgery in New York.

Prince Nayef, who at 75 is a relatively youthful member of the royal family’s senior circle, is a deeply controversial figure. Shortly after the terrorist attacks on September 11, he was sceptical about the involvement of any Saudis and publicly suggested that “Zionists” were responsible. But he adopted a tough line against al-Qaeda after the kingdom was rocked by a series of attacks in 2003 and 2004. END_OF_DOCUMENT_TOKEN_TO_BE_REPLACED