Freiburg: Today is the first day of the trial of the ‘unaccompanied minor’ refugee Hussein Khavari, who raped and drowned the medical student Maria Ladenburger on October 16, 2016. Some parts of today’s hearings will be in closed session.

People queuing in front of the court  this morning 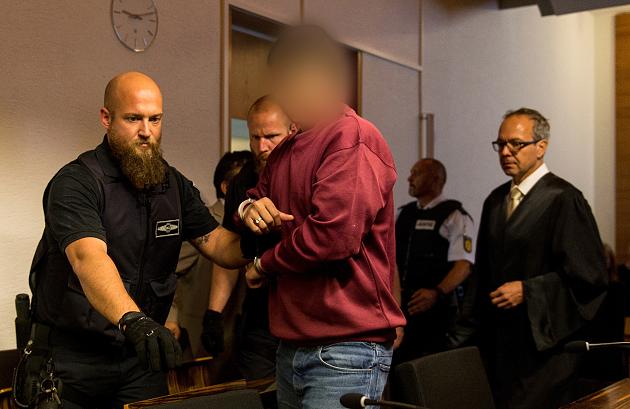 Surprise in the trial of the murder of the student Maria L. in Freiburg: the plaintiff announced a statement. Meanwhile, there were protests in front of the District Court, and viewers were standing in queues.

The death of Maria L. shook the nation: in October, she was raped and left to die in the littoral zone of the river Dreisam. Now, the murder trial in Freiburg is starting with a surprise: after the suspect, Hussein K., did not even give details about his person for months, he now suddenly announced a statement.

The young man appears tired and indifferent in front of the court on Tuesday morning. His attorney says that he took a sedative before the hearing started. Nonetheless, he were ready to answer the court’s questions.

The public interest in the trial is enormous: the trial began under strict security measures. People had been queuing in front of the District Court as early as two hours before the hearing.

In sight distance of the court, according to police, about ten people close to the AfD were protesting with banners („Protect Borders – Save Lives“). They had announced their protest on the Augustiner square. 50 left-wingers showed up for a counter protest that had been organized on the internet. Both groups were yelling slogans, the police did not have to intervene, it was announced. The protests ended at around 10:30.

Defendant’s Identity is still unclear
The hearings are closed to the public in parts. The chief judge decided that the audience has to leave the room when the defendant provides information about his sexual biography. Further details about the defendant though are discussed in public.

At the beginning of the hearing, the prosecutor describes a cruel acting of Hussein K.: according to this, the defendant ambushed the 19-year-old shortly before 3 AM in the night – the student was on her way home from a party. Hussein K. allegedly pulled her from her bike, bit her three times in the head and chest, and undressed her. Then he choked her and raped her brutally.
Subsequently, he placed the unconscious woman in the river Dreisam – according to the prosecutor, he had wanted her to drown. Additionally, the water was supposed to obliterate traces.

K. was arrested in December 2016. His identity still remains unclear. While Hussein says that he is 19, prosecution estimate him at least at 22. Two age evaluations are supposed to underpin this during the trial. According to the court, the defendant was born in Iran – until now, it had been announced that he came from Afghanistan.

Because of the doubts about his age, the hearing is at the court’s juvenile division. If he is found guilty, the court can judge according to adult criminal law though.

A Previous Attempted Murder
After K.’s arrest it surfaced that he nearly killed a 20-year old woman in Greece, before his flight to Germany. He had been arrested, but was released in a general amnesty. He then went underground, and re-appeared, unrecognized, in 2015 in Germany, as an alleged underage refugee.

Questions about the violent deed in Greece will not be permitted in the hearings in Freiburg.

There are 16 days scheduled for the hearings. The verdict is expected not before early December. 45 witnesses and ten experts will be heard.