Berlin – In a press conference today, Frauke Petry puzzled attendants by attacking her fellow AfD members, announcing that she will move into the Bundestag independently and not as part of the AfD faction, and walking out of the room, leaving Alexander Gauland, Alice Weidel and Jörg Meuthen slightly consternated. 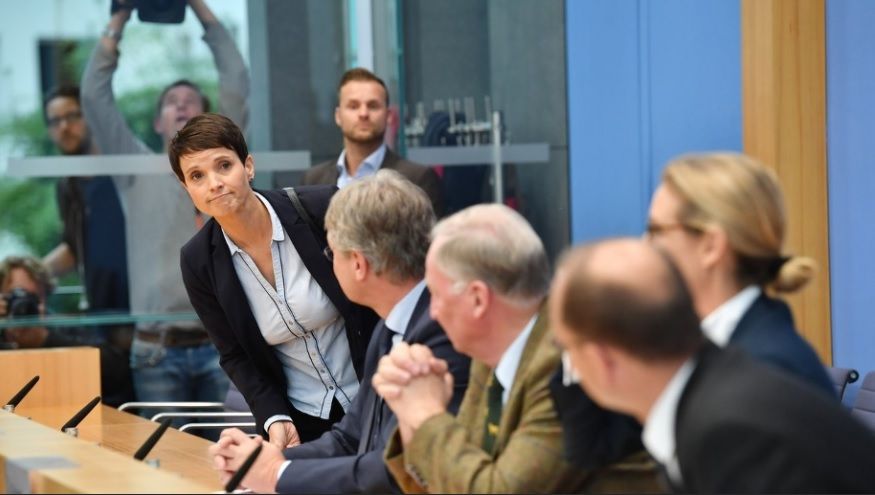 A source in the AfD tells us:

Frauke Petry stands for strategic rather than contentual positions within the AfD. She has often stated her aim, to get the AfD ready for forming a coalition within the next four years to be able to co-govern. Therefore, she rejects what she calls “fundamental opposition”. What she wants is to become acceptable for the CDU.

Becoming acceptable for the CDU

Obviously, this would mean massive concessions to the old parties. But this is exactly what the majority of AfD members do not want. Because of her strategy, she also massively lost support from the so-called “moderates”.
Her “realpolitik proposal” was rejected at the party convention in Cologne, but not because the AfD do not want to make ‘realpolitik’, but because the assertion of two irreconcilable AfD factions would have divided the party – in a time when, under the increasing attacks from outside, unity and solidarity among the AfD would have been so important.

Adopt the course that Petry proposes, or lose her support

Petry repeatedly expressed that either the AfD will adopt the course that she proposes, or lose her support. This was not well received in the AfD, a direct democratic party, where the decision-making process works from the base to the top and not the other way around. Lucke [the party’s original founder – translator] failed with a similar attempt in 2015.
The uncexpected success in the Bundestag election strengthened Gauland and Weidel, whom Petry had publicly criticized even during the election campaign, and weakened Petry.
Many convinced Petry-supporters resented her for not just not supporting the AfD in the election campaign, but even attacking them several times. She has been largely isolated in the federal executive board for quite some time now. Her prospects of leading the party have continually diminuished.
It seems that she drew her consequences today.

We had reported earlier this year on the speech that AfD’s Jörg Meuthen gave in response to Frauke Petry’s “realpolitik proposal” at the party congress: “We of the AfD are the ones who do not wish to abolish Germany”, and you can watch the speech with English subtitles here: