(This will be harder to hide of course. But let’s face it. The tyrants who seem to rule the Earth these days do not have to control everything so long as they can control how people think about everything. This man clearly died of sudden pipeline bridge syndrome. A disease out of Ukraine but spreading to the West fast. The real Pandemic)

Here is a link to a longer and very confusing video of this tragedy. If it gets removed let me know please so it can be restored.

2. In a very slick presentation on Islamophobia in Canada, they list two people as great guys. People to admire and emulate while trashing anyone opposed to Islamic manifest destiny and the philosophy of jihad etc. One of the people so admired in the report, is a professional Jew named Bernie Farber. Farber is one of the main board members of a Canadian :anti-hate” group, which while I am not positive is really just a branch office of the Souther Poverty Law Centre, may as well name itself the Northern Poverty Law centre as it is a distinction without a difference. The SPLC is caught on tape saying their mission is to destroy groups they don’t like. They do this with the classic dialectical method of applying claims of hate speech on any group that actually wants individualism and equality of the law applied to all. They are vehemently opposed to freedom of speech, even though they may use the ruse of claiming to be for it, but not for “hate-speech” which they get to define as needs be for their purposes.

Bernie claimed that an anti-semitic flyer was found at the Freedom Convoy in Ottawa last winter and then it was discovered that the photo he used was actually from some unrelated event in the US. Not that it should matter. A protest about restoring our constitutional rights where there was one popcorn machine amongst the 100,000 people or likely far more that attended the protest over the course of three weeks does not make it a popcorn festival or all about making popcorn any more than ONE Nazi flag or antisemitic flyer found on the ground makes it a Nazi rally. Be that as it may, the flyer Bernie Farber used to try and pile dirt on a classically Liberal protest was actually from another demonstration a long time previously and far far away.

But the other guy is of more interest and less subtle. This person is a Canadian civil servant who frequently advocates for the death of Jewish people. But the Islamofauxbia report makes him out to be the victim.

This report on the charitable status of various non-profits may be referring to the people who generated this report.

A report from of all places, Global News:

Jewish groups are calling for more action against online hate, after the federal government hired immigration consultant Laith Marouf. He has made vile antisemitic comments on social media, while receiving federal funding for anti-racism programs. Abigail Bimman looks at the opposition’s questions about Ottawa’s response time, and what advocate groups are calling for.

(The video of course focuses on getting Trudeau off the hook for this guy. But we are talking about a Prime Minister who built a Holocaust memorial that didn’t mention Jews)

3. The doctor who wrote the first open letter about young Ontario doctors dropping dead for no apparent reason, even athletic ones, that resulted in a viral set of articles everywhere, has written a second letter. 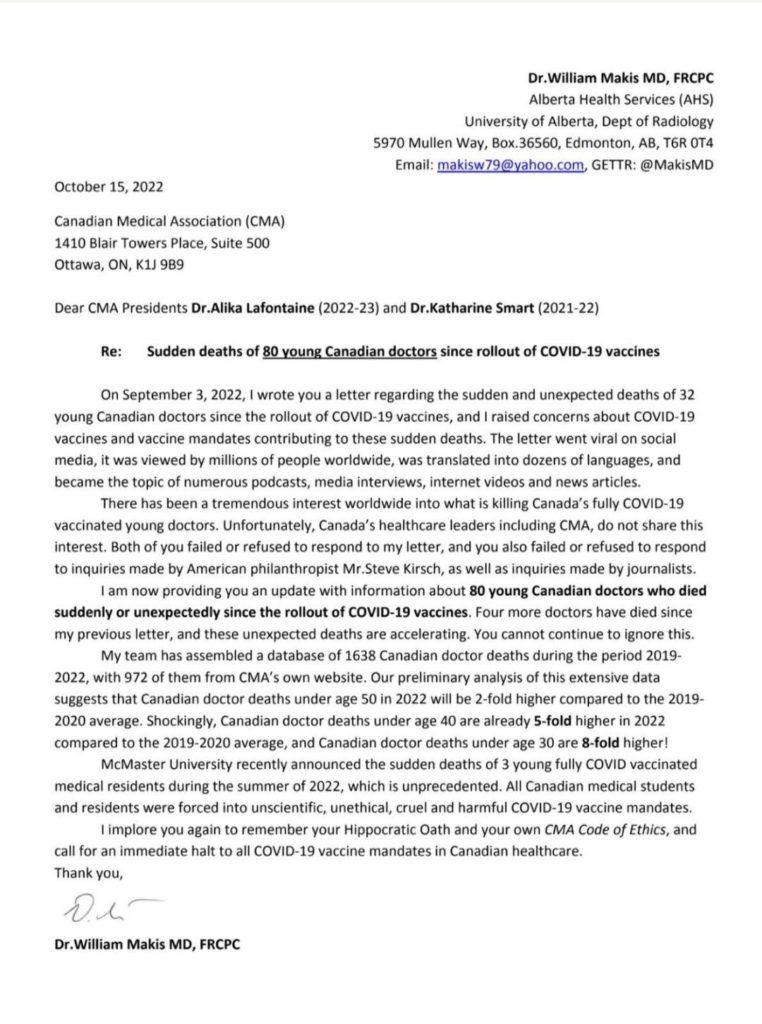 4. Masterful use of leftist dialectics against itself

Previous trolling of a city council on the same issue

Having normalized sex outside of marriage, cohabitation, same-sex sex, same-sex marriage, and now transgender ideology, the Left’s next aim is the sexualization of children.

The Left uses several mechanisms to sexualize children. Public libraries, public schools, and book retailers must feature gender-bending books for ever-younger children, all with the aim of mainstreaming the fringes. Pride Month in June, 2022 featured drag shows aplenty, where young children danced with men dressed as sexualized women or put dollar bills in the pasties of strippers. Activists and academics are hard at work redefining pedophiles as “Minor Attracted Persons” in order to reduce the stigma associated with the desire to have sex with children.

Much work must be done before these practices become tolerated. Academics invent and defend new practices in seemingly obscure journals. More academics take notice. Then those practices are translated into pedagogy in education schools. After this, it is just a matter of time until they make their way into the classroom or into a library or bandshell in a city near you.

(Actually I do not agree that this is about normalizing perversions. This is about dialectics. In the strictest sense, that means thesis – counter thesis – synthesis. The idea is you take opposites, like marriage and adultery, heterosexual and homosexual, monogamy and group sex, any set of ideas you can make oppose each other, then you pit them against each other to create a synthesis of a new kind of thinking at a higher level, understandable only to the enlightened few Marxist scientists who then act as a panel of experts and set policy on behalf of a public too stupid to understand what they are being told or shown. This is how Marxism destroys worlds. The end of the dialectic is negation. There won’t be free for all sex. There will be little to no sex. This is not about learning to find what stimulates you and using it. This is about negating what stimulates you by forcing things that repulse you on you till the whole idea is disgusting. You can see this in all critical theory pushed on our societies. Not just about sex, but sex is powerful stuff. You see it with group identities and all identities.)

Thank you for your kind attention to these ideas and stories. If ever there was a time to decide what is important to you and fight for it, it is right now.