The #Azov Battalion of #Ukraine supported by #NATO & the #US since 2014 pic.twitter.com/kW2oeDba9T 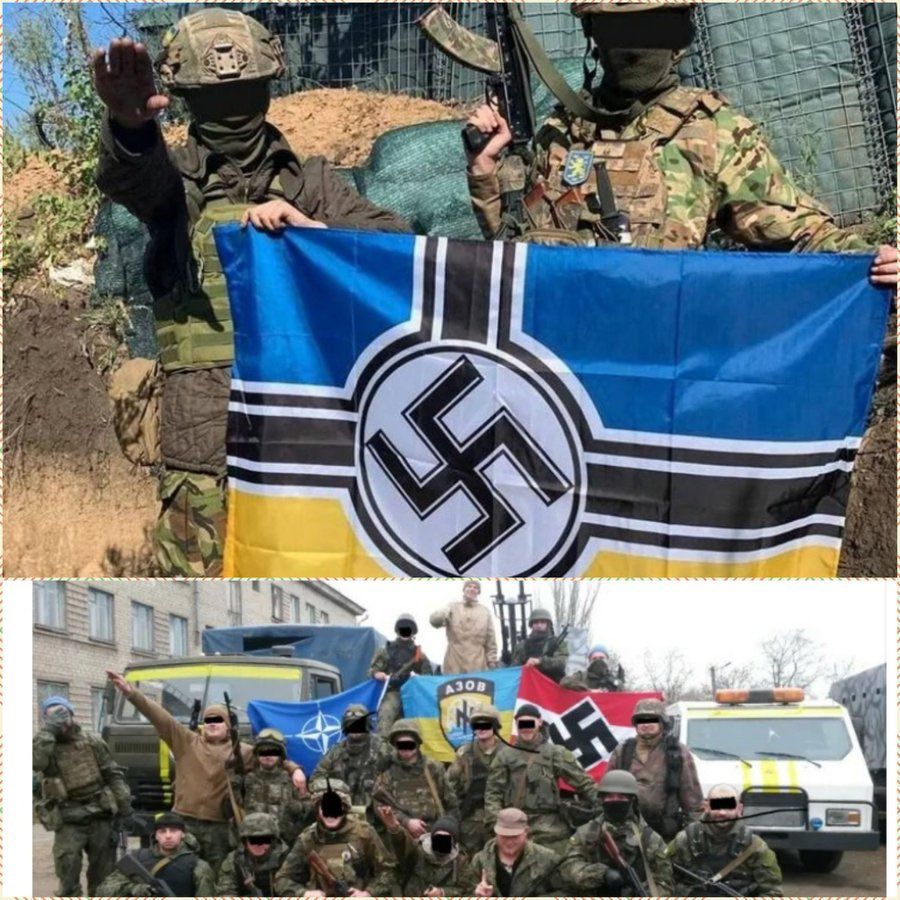 Azov Special Operations Detachment (Ukrainian: ??????? ????? ???????????? ??????????? «????», romanized: Okremyi zahin spetsialnoho pryznachennia “Azov”), often known as Azov Detachment, Azov Regiment (Ukrainian: ???? ????, romanized: Polk Azov), or Azov Battalion (until September 2014), is a right-wing extremist[1] and neo-Nazi Ukrainian National Guard unit,[2][3][4][5][6][7] based in Mariupol, in the Azov Seacoastal region.[8] It saw its first combat experience recapturing Mariupol from pro-Russian separatists forces in June 2014.[4] Azov initially formed as a volunteer militia on 5 May 2014 during the Ukrainian crisis.[9] On 12 November 2014, Azov was incorporated into the National Guard of Ukraine, and since then all members are contract soldiers serving in the National Guard of Ukraine.[10]

In 2014, the regiment gained notoriety after allegations emerged of torture and war crimes as well as neo-Nazi sympathies and usage of associated symbols by the regiment itself, as seen in their logo featuring the Wolfsangel, one of the original symbols used by the 2nd SS Panzer Division Das Reich. Representatives of the Azov Battalion say that the symbol is an abbreviation for the slogan ???? ????? (Ukrainian for “National Idea”) and deny connection with Nazism.[11] In 2014, a spokesman for the regiment said around 10–20% of the unit were neo-Nazis.[12] In 2018, a provision in an appropriations bill passed by the U.S. Congress blocked military aid to Azov on the grounds of its white supremacist ideology; however, in 2015, a similar ban on aid to the group was overturned by the Congress.[6][7] Members of the regiment come from 22 countries and are of various backgrounds.[13][14]

More than half of the regiment’s members speak Russian and come from eastern Ukraine,[15] including cities of Donetsk and Luhansk.[16] The unit’s first commander was far-right nationalist Andriy Biletsky, who led the neo-Nazi Social-National Assembly and Patriot of Ukraine.[17][18] In its early days, Azov was a special police company of the Ministry of Internal Affairs, led by Volodymyr Shpara, the leader of the Vasylkiv, Kyiv, branch of Patriot of Ukraine and Right Sector.[19][20][21] In 2016, members of the non-governmental organization “Azov Civil Corps” and Azov Battalion veterans created the political party National Corps.[22]