1. WestJet flight diverted back to Calgary after pilot medical emergency

WestJet declined to provide details on the illness or the current condition of the pilot, citing privacy concerns

A plane flying from Calgary to Atlanta Monday afternoon was forced to turn around due to a medical emergency involving the pilot.

WestJet flight 1590 landed safely at Calgary International Airport at 1:12 p.m. Monday, just less than about an hour after taking off, according to public flight logs.  The Boeing 737 MAX 8 plane was flying over southeastern Alberta when it turned back toward Calgary.

In an email statement, WestJet spokesperson Madison Kruger said EMS met the flight upon arrival and the pilot was removed from duty. Another pilot onboard took control of the plane.

“All WestJet flights have two pilots, to ensure that should any illness occur in the flight deck, there is an additional pilot onboard to ensure the continued safe operation of the aircraft and the safety of our guests and our crew,” Kruger said.

EMS said they responded to the airport terminal around 1:25 p.m. but that paramedics had no patient contact and left the scene without request for EMS assistance.

Edmontonian John White was a passenger on the flight, sitting four rows from the front of the plane. He first realized something was awry on the flight after noticing concern among flight attendants, one of whom brought a first-aid kit and a defibrillator into the cockpit.

“Then they made the call for if there is a doctor, nurse or EMT on the plane and as luck would have it, one doctor came forward and two nurses,” White said. He said a pilot on board in the passenger area also made his way to the cockpit.

White said the pilot was brought out of the cockpit and set down as medical volunteers treated him. The pilot appeared to collapse shortly afterwards.

“They were able to get him talking again after they got him on the floor, but they were working on him pretty feverishly,” White said.

(OK so what we know is, its heart related, and the government-media complex, conspiracy is a better word, will move mountains to make sure we don’t know what we already know.) 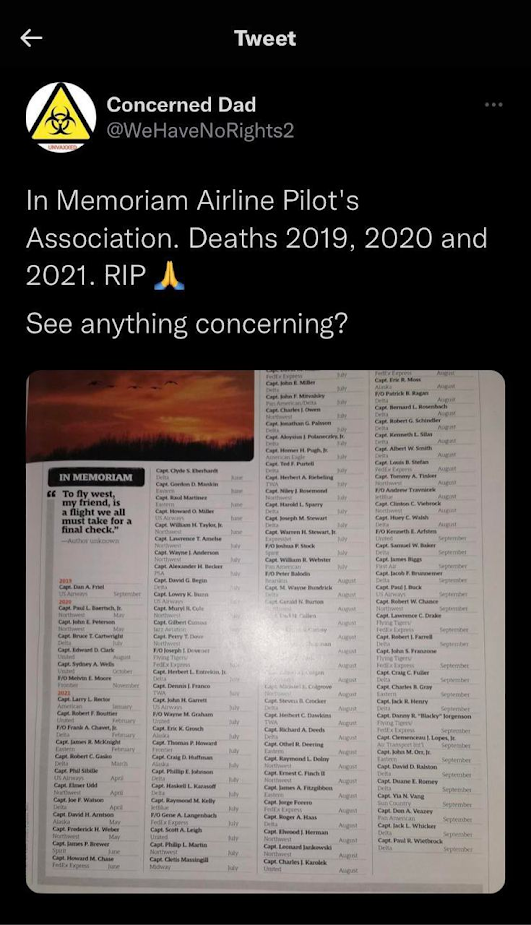 What is he talking about? Well let’s just -tighten up- that shot group so to speak… 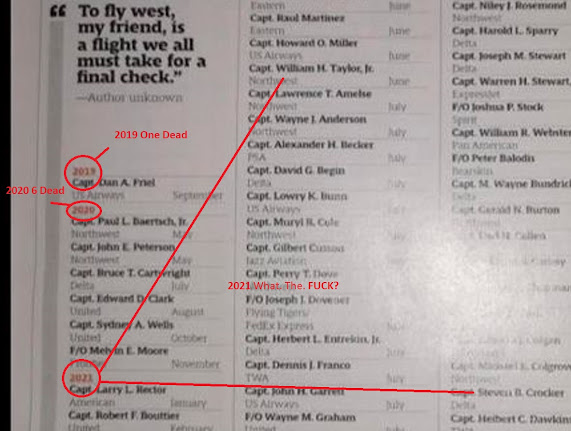 28 in the second column  Dead
36 +/- (column cut off) in the third column Dead
33 +/- (column cut off) in the fourth column Dead
Uhhhhhh
That makes, in 2021 alone with missing data mind you
A grand sum total of -109- dead pilots in 2021 so far
‘Cos that chart?
Stops in September
Thank you Gates of Vienna, M., Sassy, and all who sent in materials today.
UPDATE: Comment from Radu:

Eeyore, yesterday I looked all around to find the list of dead pilots that the tweet above shows. I was not able to find it. “Concerned dad” ought to provide a link.

Also, another list I found (for another year showed almost all were elderly retired pilots.) So I am a bit confused as to what we are looking at in that tweet.

So late reporting seems reasonably consistant over the years, I was working backwards and thought I’d founf somme sort of smoking gun with the jump from 19/20 to 21 but the data from 2018 is of the same magnitude so for now I humbly submit that this is much ado about nothing.

Personally I think we still need to wait and see. I think the difference between 2020 and now, is that the stats for 2021 are not fully available, and that the increase from 2020 may be health issues from the shots. We shall see.