1. Senator Johnson speaks on the Senate floor on Covid data as not justifying vaxx mandates

It should be noted that the US CDC now has jiggered with the VAERS system to remove a lot of reported deaths. Fact checkers confirm it by denying it, and if you have been paying attention, that Orwellian sentence will make sense. Here is a report on Myocarditis adverse events in the system as is. Meanwhile, the WHO has recorded over 2 MILLION adverse events. Also, as posted the other day, here is an analysis of the events as they are in VAERS. Which is more than bad enough to stop the mRNA products right away.

2. Lee Valley (tools) warns customers of delays of up to 1 year, higher prices to come

(This is a CBC story so who the hell knows what the truth of it is. But no matter what the facts are, its clear that the communist policies of Canada and other developed nations are meant to cause shortages and they either are, or they are announcing they are. Remember, CBC is the enemy propaganda org most responsible for pushing mandatory vaxx and covid measures, yet strangely are exempt from them themselves)

Canadian retailer Lee Valley Tools has a bleak warning for anyone looking to get their hands on high-end garden shears, brass escutcheons or crokinole boards any time soon: good luck.

The Ottawa-based home and garden chain with 20 stores across Canada told customers in an email this week that it is sending out its Christmas catalogue “uncomfortably early” this year because it is anticipating major delays in getting its goods to market.

“The message for consumers is buy early, because there is no chance to reorder or to replenish [before Christmas],” said CEO Robin Lee in an interview with CBC News. He said that the inventory the company has now are products they ordered a year ago.

Lee Valley is just the latest company to warn of the massive problems it is seeing in getting its products from suppliers and manufacturers to the shelves — a complicated process known as a supply chain.

3. Abos get the carrot, Australians get the stick

4. Fun video showing how the lies on efficacy give way to facts over months.

5. From the actual human rights law firm, the JCCF, Covid stats for Alberta: 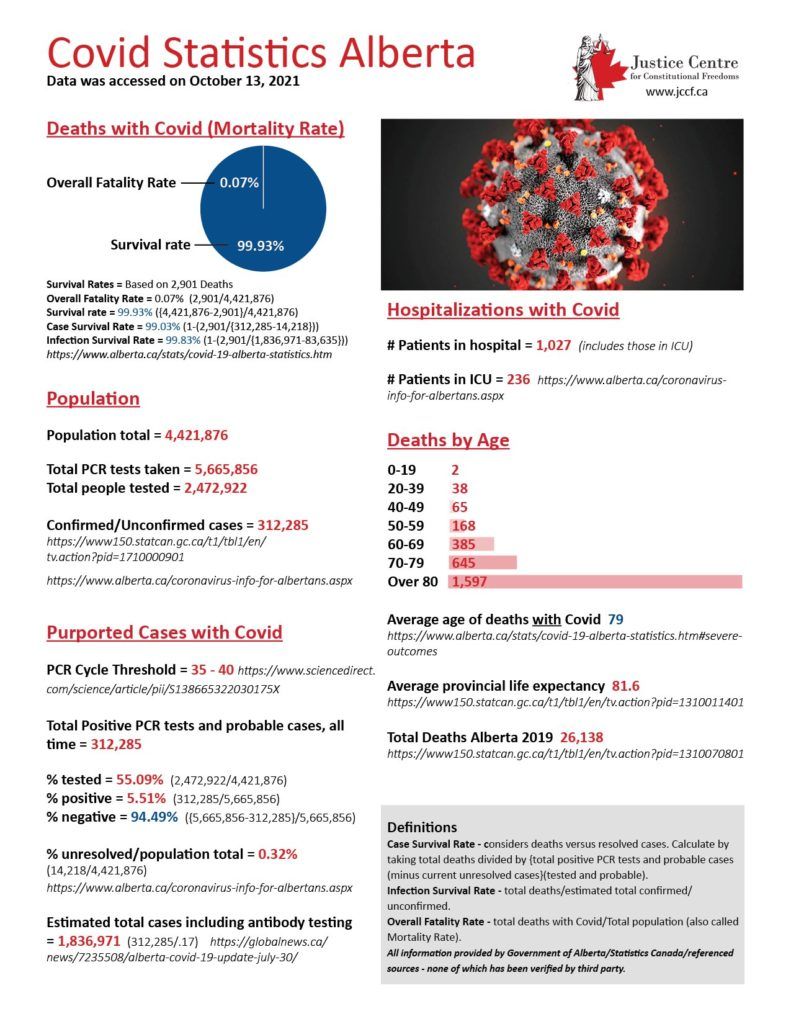 Thank you Oz-Rita, M., Johnny U., MissPiggy and many many more who contributed over the weekend, both here and at the Mastodon pod. Its been a busy few days and I lose track sometimes, especially when someone sends in a link and I have the tab open for days thinking about it, then post it. No reccolection at all of who sent it by then, but know the appreciation is there!

Gotta say, this guy wins the quotable award for 2021. I don’t think he intended to be prophetic. He was talking about then, but increasingly its as much about now. Maybe thats how all truly insightful writing works.

From Russia, with love pic.twitter.com/bmBcau0VWx

2 Replies to “Increasingly, reality does not justify these measures: Links 1, October 16, 2021”