“The ERs are so backed up that gunshot victims were having hard times getting to facilities where they can get definitive care and be treated,” Dr. Jason McElyea said

There are a few ways you can spot this lie. The first is that hospitals do triage. This means that they would not leave a gunshot wound patient to wait while they look at a mild case of Ivermectin reactions, if they in fact happen at all.

A second way is they used an unrelated stock photo.

A third way is check with the hospital itself: 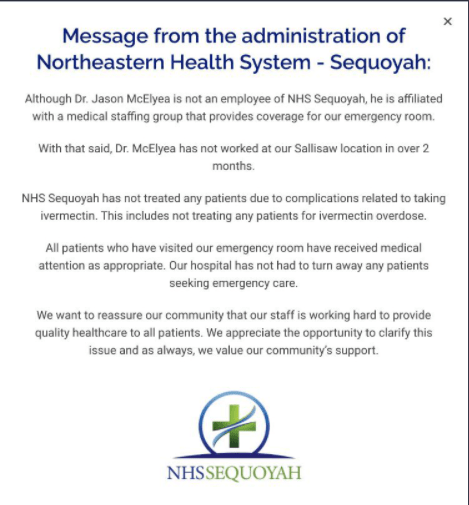 ZeroHedge writes it up here

2. In the spirit of the item above, here is an article which calmly and quite fairly examines some of the more egregious lies and facts connected to the entire period of this hostile take-over of the world allegedly due to a virus. (Hyperbole is mine. Article is quite balanced) For example, it is true that at no time did the makers claim that the vaccines would prevent infection or transmission. Only reduce symptoms and deaths. Which seems a good deal anyway. If it does that. Article is worth a look even just to see what are established facts and confirmed lies in one spread.

3. What is wrong with this picture?

What happened to Dr. Tam? pic.twitter.com/AEQcBRWehw

She looks like one of the few at the top of the pyramid who actually took the shot.

One claim is that its photoshopped.

This appears to be the presser here. I would say a case could be made! From September 3, 2021

4. Sassy posted a link to an Alex Jones broadcast and pointed to a time where they show a clip of Tucker Carlson. Below is the entire show of Tucker’s from which Alex grabbed that clip. Its worth posting again because Tucker makes a prediction in his monologue and says: “Save this clip”. So we did and here it is.

CNN has some infantile adjectives for Tucker Carlson. And that’s where we are now.

5. In what appears to be about the third or more, islamic act of jihad in Western nations since the Taliban reestablished the Caliphate, we have a double stabbing in Germany.

AN AFGHAN national with “possible Islamist motivation” stabbed a female gardener in the neck because he didn’t believe a woman should be doing such a job, it has been claimed.

The Attorney General office in Berlin tweeted this morning that the 29-year-old had been detained after a gardener and passerby were attacked in the Wilmersdorf part of the German capital. Both victims suffered “serious injuries” during the attack which happened in a park at around 1.30pm local time yesterday, Berlin police said.

In a statement, the force said the suspect approached the 58-year-old woman and reportedly attacked her because he did not believe a woman should be doing such a job.

The man is then said to have stabbed the gardener several times in the neck, leaving her with serious injuries.

We will discuss what is likely to be a rash of new terror attacks on the West from an Islamic theological point of view soon. Meanwhile, expect a lot of attacks on random non-muslims by muslims in the next couple of seasons.

Thank you Sassy, Malca, M., Richard, EB., ET., PC., Whitespace, and all who contributed to this effort and all like it anywhere.

For those of us who follow the science as opposed to the scientism, this is a basic concept of evolutionary biology.

"Vaccines Are Pushing Pathogens to Evolve"…
"Just as antibiotics breed resistance in bacteria, vaccines can incite changes that enable diseases to escape their control."
Written in 2018 (this is not a novel idea)https://t.co/g1mCzos2iX