1. What’s her face reminds us of major failures of the FDA and their approved drugs.

According to the president of the Association of Local Public Health Agencies of Ontario, Dr. Paul Roumeliotis, the province is preparing to follow Quebec’s example “within one to two weeks”.

Guest on Tuesday on the show Sur le vive , the medical officer of health of the Eastern Ontario Health Unit (EOHU) and president of the Association of local public health agencies (alPHa), Dr. Paul Roumeliotis, has indicated that Ontario would soon adopt the vaccination passport as well.

It’s going to be, in my opinion, something on the mobile [phone] , he revealed. I don’t think the government here has a choice. I know they said initially, “No, we won’t have the [vaccine] passport.” But we have no choice. I think that’s one of the ways, with [the obligation] to get vaccinated in hospitals, universities, etc. It’s all going to help us increase [vaccination] and get closer to that last mile.

Dr Roumeliotis explained that discussions have taken place with officials from the Ministry of Health on this issue.

(for those who do not know, Trudeau is suing Parliament and the Speaker of the House, for demanding answers on the Wuhan Lab arrests of two Chinese spies where no information was every provided to the Canadian people past the point they were escorted out of the level 4 biolab, mysteriously placed in the middle of the large city of Winnipeg)

Henipah was one of the two types of viruses sent to China by Chinese-born scientists from a Canadian laboratory at the centre of a controversy over the firing of the scientists and collaboration with Chinese military researchers. It is not clear whether the virus found in the Chinese samples is related to the virus samples sent by the Canadian lab, which were shipped in late March 2019.

The finding was confirmed for The Epoch Times by another qualified scientist.

The evidence was first found by Dr. Steven Quay, a Seattle-based physician-scientist and former faculty member at the Stanford University School of Medicine, who looked at early COVID-19 samples uploaded by scientists at the Wuhan Institute of Virology (WIV) shortly after China informed the World Health Organization about the SARS-CoV-2 outbreak.

4. Criminals in Sweden; Where do their parents come from?

(We interviewed a woman in Sweden who was arrested and treated very harshly by police, left miles away from anywhere at night in the woods, all because she retweeted a Swedish government statistic about migrants and criminality. To put it more clearly, an American immigration watch group, tweeted an official Swedish government statistic about the grossly over represented mostly Muslim and African demographic in Swedish crime stats, especially if I recall correctly, rape and this Swedish citizen, after researching the stat and verifying it for herself, retweeted it and was arrested for doing so.

I would love to post a link, but she asked me to remove it because even the interview meant she would not be able to find a job.)

5. UK report on Covid deaths and vaccines have surprising stat.

[…] Let me say that another way – two-thirds of Delta deaths in the UK are in the jabbed.

From the 1st of February to the 2nd of August, the UK recorded 742 Delta deaths (yes, the dreaded Delta has not taken that much life).

The report is here.

But this is the crucial page. Look at the bottom line. 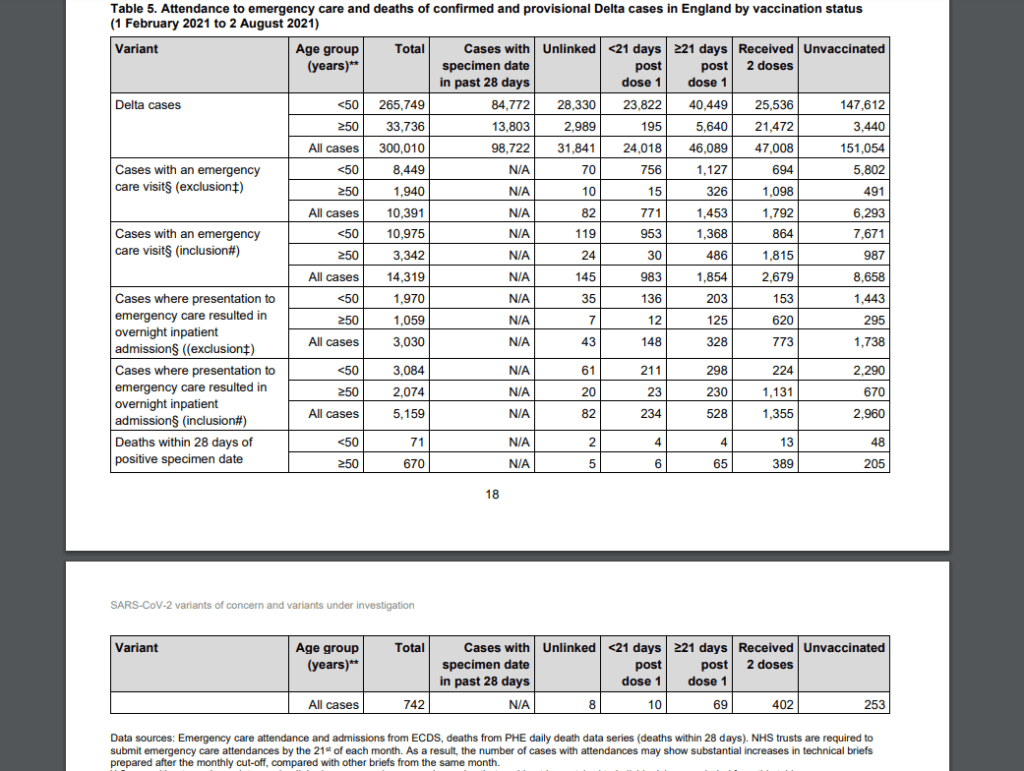 Thank you all who sent in such important materials for our collective wisdom, even if our collective choices become more limited no matter what the facts are.

8 Replies to “Canada politely walks to authoritarianism, and we are told in French: Links 3, August 25, 2021”