1. Australia unleashes a new fury on the freedom minded never before seen on that continent.

Personal testimony by an Australian:

Listen to how bad it is in Australia right now. pic.twitter.com/ogrmvlNzgT

Remember that these same police forces kneeled down on the ground before Marxist BLM rallies during one of the first lockdowns. That must be entered into any equation one does about the rationale for these police actions against peaceful protestors. Peaceful for sure until they meet unnecessary police there to mess up their “illegal” protest against the overreaching state. 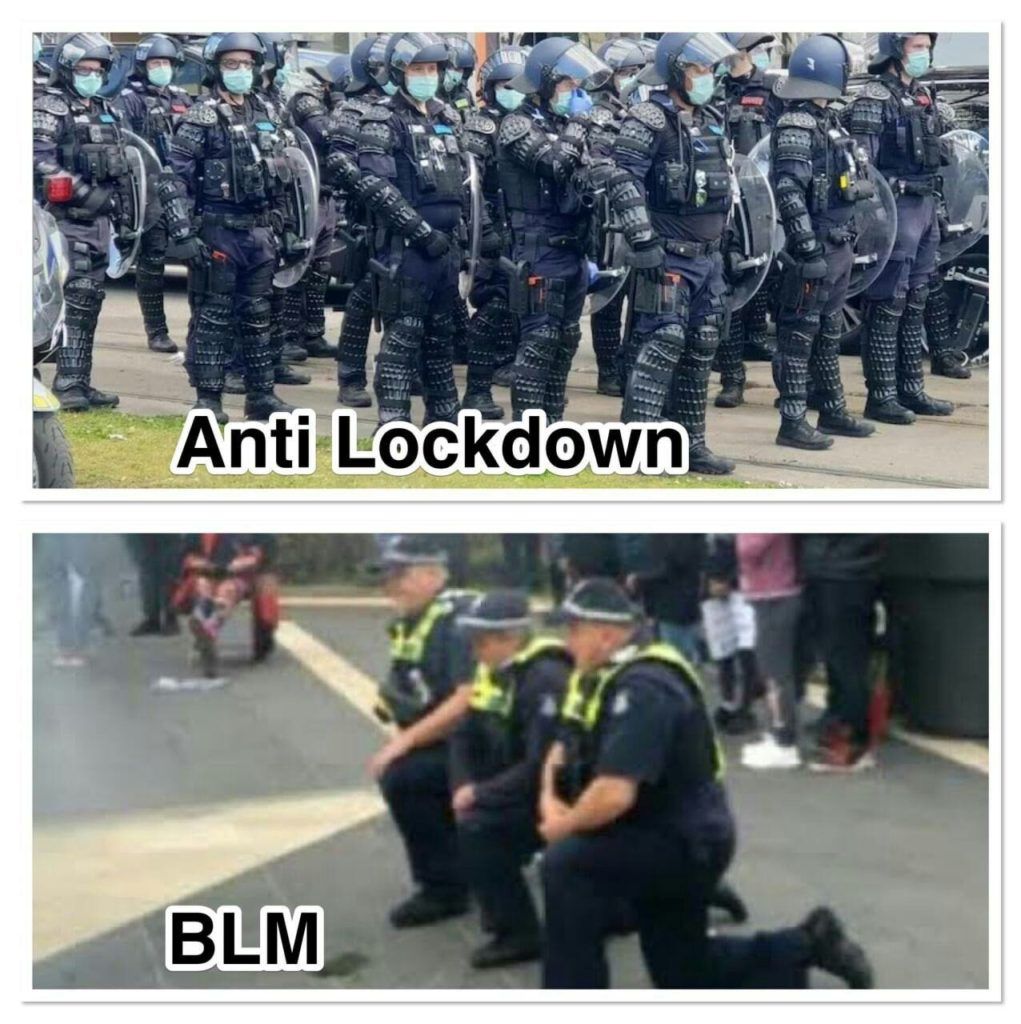 2. The question that must never be asked: “How can it possibly get worse?”

2a) THE TALIBAN HAVE SEIZED U.S. MILITARY BIOMETRICS DEVICES

THE TALIBAN HAVE seized U.S. military biometrics devices that could aid in the identification of Afghans who assisted coalition forces, current and former military officials have told The Intercept.

The devices, known as HIIDE, for Handheld Interagency Identity Detection Equipment, were seized last week during the Taliban’s offensive, according to a Joint Special Operations Command official and three former U.S. military personnel, all of whom worried that sensitive data they contain could be used by the Taliban. HIIDE devices contain identifying biometric data such as iris scans and fingerprints, as well as biographical information, and are used to access large centralized databases. It’s unclear how much of the U.S. military’s biometric database on the Afghan population has been compromised.

(Kinda reminds me of how the Chinese hacked the entire US government database with all names addresses and job descriptions and much more of all federal agents a few years ago. Really. That happened. Brad Johnson spoke extensively on it.)

2b) The answer that is an inevitability when you ask the forbidden question:

The State Department has been hit by a cyber attack, and notifications of a possible serious breach were made by the Department of Defense Cyber Command.

(I always thought Jackson was more of a race bating ambulance chaser than he is a “civil Rights Leader” but maybe I am confusing him with someone else.)

The Rev. Jesse Jackson, 79, and his wife, Jacqueline, 77, have been hospitalized after testing positive for COVID-19, according to a statement Saturday.

Jesse Jackson, a famed civil rights leader, is vaccinated against the virus and received his first Pfizer dose in January during a publicized event as he urged others to vaccinate as soon as possible.

Jacqueline Jackson, a largely private figure, has not spoken publicly about her vaccination status. The two are being treated at Northwestern Memorial Hospital in Chicago.

(What a dilemma for him if he was one of those celebs who faked getting the vaccine.)

(Something we can all look forward to in the years ahead)

Others are merely baffling. Public swimming pools are confronted with epidemics of young Afghan men who think it a good idea to expose themselves, whipping off their pants and standing there until tackled by the lifeguards and removed from the premises with orders to never return. Let’s be charitable: let’s assume that at some point, one or two of these young men might have heard stories of nudist beaches and thought to join in. But that’s hardly an explanation. Seriously; in a foreign country where your legal standing is tenuous, wouldn’t you cast a quick glance around to ensure that you are not the first and only man thus flaunting his ornamentation, before engaging in conduct that your entire upbringing has taught you to consider unthinkable? Come on!

Plus, within hours or days of their arrival, the Afghan-refugee grapevine educates newcomers as to the ins and outs of navigating the country: what offices to go to and what to say when you get there, where to apply for additional aid, where to find free housing and so on. If they can learn all of that, they can figure out the dress code.

(If the left was even 1% sincere in the propaganda they deal out in metric tons, this would be awkward for them, as this preacher uses racism against white people to get his constituency to not take the vaccine. Fortunately for the left, they don’t mean a word of what they say, so they won’t need to make up an awkward response to this man)

Butiama/Dar. The government has ordered the police and Prevention and Combating of Corruption Bureau (PCCB),to arrest and interrogate Kawe MP Bishop Josephat Gwajima to substantiate his statements against Covid-19 vaccines. […]

On Sunday July 26, while addressing worshipers in Dar es Salaam at his Church the outspoken cleric said that developed countries which spearheaded the vaccinations initiatives have ulterior motives.

He told his followers that he was dedicating this whole week to preaching on the danger of the Covid-19 vaccinations.

“I have been to many countries. I have interacted with White people on many occasions and I can tell you, there are absolutely no free things from them.
If White people give you something for free, be sure that they are expecting to get something in return,” said Mr Gwajima who took up politics during the reign of the late President John Magufuli – and was elected Member of Parliament for the Kawe constituency on the ruling party’s ticket.

Thank you Sassy, M., ML., Oz-Rita, Maplewood, Richard, Hellequin GB., MissPiggy and MANY more who are alert and concerned enough to stay above water