1. Interview with Dr Rainer Füllmich from May 22

(Oz-Rita, who gave us the links for today’s stream of Dr Rainer Füllmich and the link above, tells us that Melbourne went into its 4th lockdown, where people can leave for “essentials” vaccines and tests.)

2. Canada health rejects doctor’s adverse-effects report of vaccine damage. There is no embed, but this is a Rebel News video. Click through and watch. 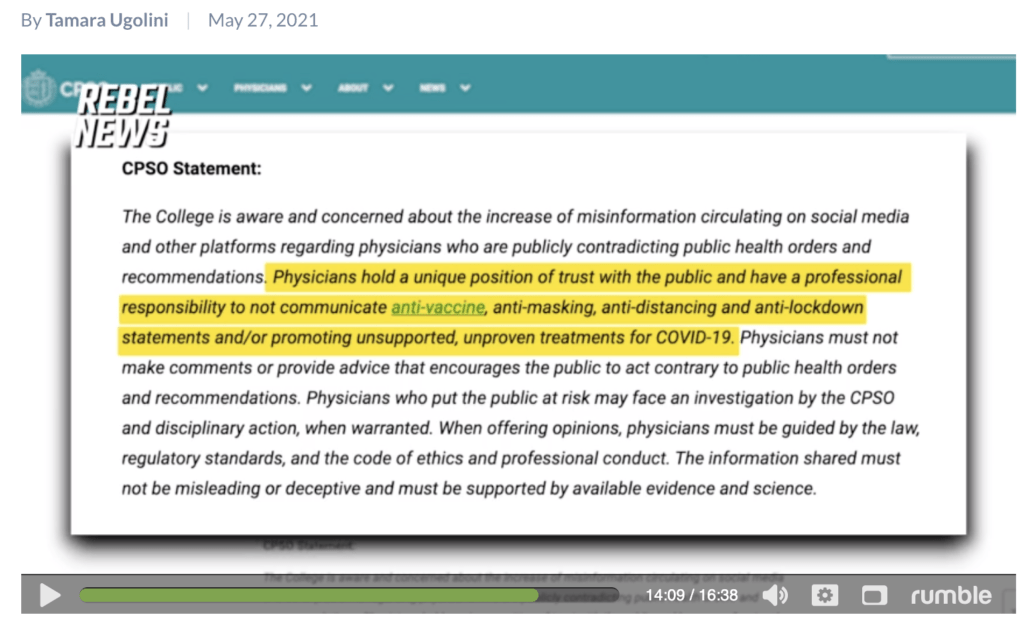 In communist countries, for this example, the Soviet Union, there is no search for truth and policies and institutions set up on the search for, and understood truths. Instead, communists would invent a science that led to the pre-made conclusions that Marxist scientism would demand, and be held as truth. Much like religious axioms. In terms of evolution, Darwin was illegal. They used a crypto-science called Lysencoism, which was like the rest of communist thought (and Islamic for that matter) conclusion based reasoning, rather than reason your way to falsifiable conclusions. This is what is happening in Canada’s health bureaucracy. Doctors cannot report or communicate anything which goes against an official narrative, no matter what the truth is, and in fact especially if the reportage is truthful, as the government agenda is clearly based on lies. But lies to a purpose. To get everyone vaccinated, no matter the cost to the individual. And that cost is often death.

4. Massive anti-communist and anti regime campaign by leaflet in the North Korean capital

5. Murder rate in Sweden higher than most other European countries: ‘No other country has experienced such an increase’

In comparison: in the Netherlands there were an average of six fatalities. Croatia is the only other European country that has seen an increase in the number of people in their twenties killed with a gun since 2000.

Especially since 2013, the number of murders committed with a weapon in Sweden has increased significantly. The perpetrators are mainly young men from the criminal background living in the deprived areas of the big cities. In recent years, the country has also been shaken by extreme violence from criminal gangs with explosives. For example, in 2018, according to the police, 162 bombs were used in the fight between gangs that mainly deal in drugs.

The researchers do not want to get burned by the background of the perpetrators. From a survey of the largest newspaper Dagens Nyheter In 2017, after 100 murders and attempted murders, it turned out that 90 percent of the suspects had a migrant background. The right-wing populist party Sweden Democrats, which is now at 19 percent in the polls, constantly points to the involvement of migrants in violent crimes, among other things.

Thank you Xanthippa, M., C., Richard and MANY more who have their eyes on the road.