1. Sceptics of Covid measures have a much higher understanding of science than the compliant

2. This one is as revealing as it is mind blowing. According to the odious ADL, anti-ANTIFA images are hate symbols. 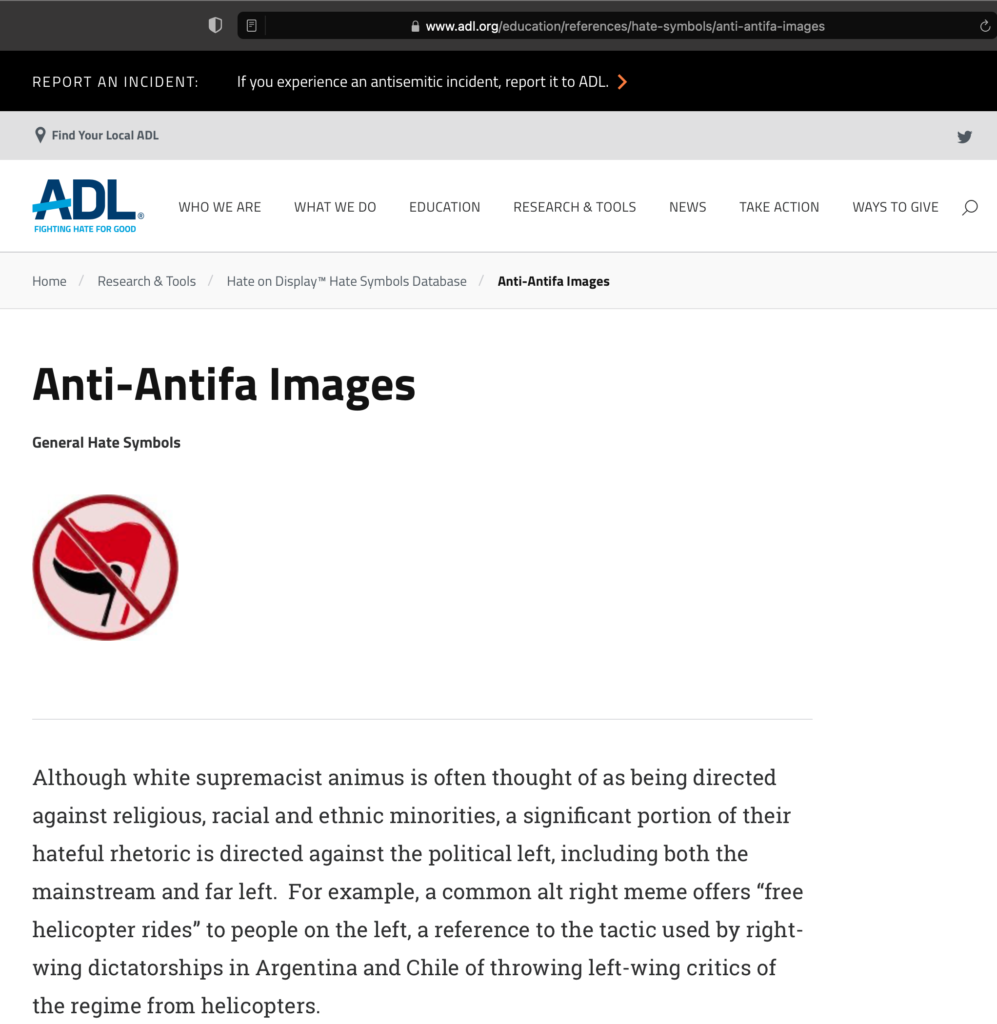 Last month, Yahoo News ripped the lid off of a government surveillance program run by a division of the USPS. The program monitors, scans, and collects information on social media postings considered “inflammatory” enough to pass along to other government agencies. It includes posts promoting the coordination and planning of upcoming political demonstrations.

The program’s existence came out after the news outlet obtained a copy of a March USPS bulletin that was “distributed through the Department of Homeland Security’s fusion centers.” It warned of the possibility of violence at upcoming protests though they acknowledged they had no reliable intelligence to suggest any alleged threats were legitimate:

“Analysts with the United States Postal Inspection Service (USPIS) Internet Covert Operations Program (iCOP) monitored significant activity regarding planned protests occurring internationally and domestically on March 20, 2021,” says the March 16 government bulletin, marked as “law enforcement sensitive” and distributed through the Department of Homeland Security’s fusion centers. “Locations and times have been identified for these protests, which are being distributed online across multiple social media platforms, to include right-wing leaning Parler and Telegram accounts.”

“No intelligence is available to suggest the legitimacy of these threats,” it adds.

The bulletin includes screenshots of posts about the protests from Facebook, Parler, Telegram and other social media sites. Individuals mentioned by name include one alleged Proud Boy and several others whose identifying details were included but whose posts did not appear to contain anything threatening.

“iCOP analysts are currently monitoring these social media channels for any potential threats stemming from the scheduled protests and will disseminate intelligence updates as needed,” the bulletin says.

The report about the previously unknown iCOP sparked an outcry among Congressional Republicans. A House Oversight and Reform Committee hearing was held a week later where a USPS official confirmed its existence without going into a lot of detail:

Barksdale told the House Oversight and Reform Committee that the initiative has netted no arrests and will continue despite privacy concerns, which arose after the program was revealed publicly last week, the outlet reported.

Barksdale said the operation — which reports threatening posts to local and federal law enforcement — is overseen by a USPS executive. But he claimed it’s not a real “program” because it’s “incident-related,” not an ongoing initiative, according to the outlet.

This week, Yahoo News filed a new report detailing more information they’d learned about iCOP. The outlet noted that “the program is much broader in scope than previously known”:

Yet the program is much broader in scope than previously known and includes analysts who assume fake identities online, use sophisticated intelligence tools and employ facial recognition software, according to interviews and documents reviewed by Yahoo News.

Among the tools used by the analysts is Clearview AI, a facial recognition software that scrapes images off public websites, a practice that has raised the ire of privacy advocates. The U.S. Postal Inspection Service uses Clearview’s facial recognition database of over 3 billion images from arrest photos collected from across social media “to help identify unknown targets in an investigation or locate additional social media accounts for known individuals,” according to materials reviewed by Yahoo News.

According to the interviews and new documents reviewed by Yahoo News, the genesis of iCOP appears to date back to 2018, when the U.S. Postal Inspection Service expanded and rebranded its “cybercrime dark web” program into a broader covert operation.

Analysts with iCOP closely monitored social media postings once the Antifa/BLM-led protests and riots started after the death of George Floyd last year. Likewise, they closely tracked right-wing posts on Twitter, Parler, and other social media platforms after the Jan. 6th Capitol riots.

When asked to explain and defend the existence of the program, the USPS told Yahoo News in a statement that the goal of iCOP was to protect USPS employees and its infrastructure:

“The Internet Covert Operations Program is a function within the U.S. Postal Inspection Service, which assesses threats to Postal Service employees and its infrastructure by monitoring publicly available open source information,” the statement said.

Based on what is now known about the surveillance program, however, it would appear that iCOP’s scope has gone way beyond merely monitoring potential threats to employees and infrastructure and has understandably raised serious privacy concerns. Expect more hearings on this matter in the coming months, especially in light of the Democrat-led push to keep the “insurrection” narrative alive via umpteen overlapping Congressional “investigations” into the Capitol riots going into the 2022 elections.

Yesterday, Belinda and other opposition MPPs stopped the PCs ramming through emergency powers extension on a voice vote.

As a result, the PC MPPs won't be able to hide and will have to vote on the record for extending their emergency powers until December.#onpoli @NewBlueON https://t.co/5RCFJ9wyBO

A judge in Georgia unsealed roughly 145,000 absentee ballots from the November election for review in a Friday ruling.

The ballots must remain with Fulton County election officials throughout the audit, and the results of the review cannot impact the outcome of the November election, Henry County Superior Court Judge Brian Amero said. The plaintiffs in the case accepted the terms, saying that the review is still needed after controversial behavior by Fulton County election officials last year, according to the Atlanta Journal-Constitution.

“Friday’s decision came in a lawsuit filed by nine plaintiffs, including Garland Favorito, a Fulton county resident and self-styled election watchdog,” the Journal-Constitution reported. “It’s one of more than 30 Georgia lawsuits stemming from the November presidential election and the January runoff for U.S. Senate. Some of the lawsuits are still winding their way through the courts.”

Thank you all who contributed to this and all posts today.

3 Replies to “Are there any parts of government in North America that are NOT communist? That would take less time: Links 2, May 22, 2021”