2. A message for President Trump

This message is for the PRESIDENT OF THE UNITED STATES OF AMERICA .@realDonaldTrump pic.twitter.com/tbChYfGHpt

3. President Trump from the hospital 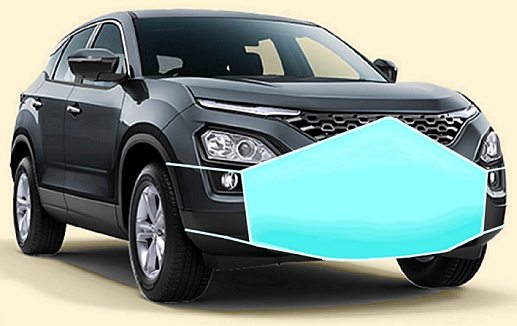 It’s well-established that the front ends of cars look like faces. Cartoonists have been exploiting the resemblance for over a century. Many modern SUVs seem to have faces like the helmets of Empire storm troopers in the Star Wars movies, but that may just be my idiosyncratic apperception of them.

When I was driving home from the Outer Boonies yesterday, the faces of the oncoming vehicles made me think: Those cars should be masked. And that gave me the idea for a business venture.

Now is the time for a shrewd entrepreneur to market face masks for vehicles. The ad copy could go something like this: [Please read through at Gates of Vienna]

5. Maxime Bernier tweet about protests against Corona measures in Toronto

When asked why he felt it was important to support the protestors, Bernier said “The Second Wave is here, right across the country. But it is a second wave of more socialism in our country with the Trudeau government spending money that we don’t have.”https://t.co/bdnKS4xNk0

Mum arrested at Altona beach for not wearing a mask & failing to give her name to police.

(Can it be a coincidence that in far left areas like Victoria that leaders who support ANTIFA and communism and the defund the police movement also force the police to act in ways that will make normal freedom loving people hate them? I wonder why that might be? Police who are able to, are best to take holidays or otherwise refuse to follow these kinds of orders as it will result in the end of the job as it is and lead to something much much darker)

BAKU, Azerbaijan — The fighting between Armenian and Azerbaijani forces continued on Sunday over the separatist territory of Nagorno-Karabakh, with Azerbaijan’s second-largest city coming under attack.

It wasn’t immediately possible to verify the authenticity of the video. Hajiyev said in another tweet that attacks on Ganja and other areas in Azerbaijan were launched “from territory of Armenia.”

Armenia’s Defense Ministry said that “no fire of any kind is being opened from the territory of Armenia in Azerbaijan’s direction.” But Nagorno-Karabakh’s leader, Arayik Harutyunyan, confirmed on Facebook he ordered “rocket attacks to neutralize military objects” in Ganja. His spokesman, Vahram Poghosyan, said the territory’s army destroyed a military airport in Ganja, a claim Azerbaijani officials denied.

9. Video on the mechanism of permanent coup being used both against the US government and also at The Vatican.

10. An analysis of the use of masks and respirators to control the spread of viruses. The other side of the debate that isn’t allowed to happen.

The following quote was sent in to the site and attributed to Kamil Attaturk, the founder of modern Turkey as it was until Erdogan. It would be great if this quote was sourced, but it doesn’t matter, its true even if the sender made it up.

“Islam, this absurd theology of an immoral Bedouin, is a rotting corpse which poisons our lives” -Mustafa Kemal Atatürk

Also, I don’t remember where I read this, but the Bible stating that “Though Shalt Not Steal“, and I would like to add by extension, “You shall not covet your neighbor’s house. You shall not covet your neighbor’s wife, or his male or female servant, his ox or donkey, or anything that belongs to your neighbor.” are both pretty powerful endorsements for the existence of, and right to, private property. So when people suggest that the Pope is not Catholic, and in fact not even Christian, it seems pretty clear from his entire papacy but especially in the past months. Here is just today’s example. For those who missed it, it may be worth watching the Pope’s Deal with the Devil video on Francis’ alliance with the Communist Chinese.