1. Sharpened enhanced video of the attack on NYC police.

2. Now Black Lives Matter statue FALLS: Bristol council crew arrives at 5.20am to remove sculpture of protester from plinth where Edward Colston memorial once stood… 24 hours after it was secretly installed

(Is anyone asking how long it took to make the sculpture that the Marxists installed? It goes a long way to showing that these riots and this insurgency is hardly grass roots and certainly not inspired by the death of Floyd, if one assumes that it took more than months to make this statue. It means the destruction of the one that it replaced was a planned calculated move by people behind the scenes with money and a plan.)

Bristol council have removed a statue of a Black Lives Matter protester around 24 hours after it was secretly raised on a plinth where a memorial to Edward Colston once stood, before it was dumped in a nearby harbour by demonstrators last month.

Pictures from the scene show workers at the site at around 5.20am on Thursday, more than a month after demonstrators tore down the Colston statue, rolled it through Bristol’s streets and dumped it in the city’s harbour.

Bristol City Council said it was removed at their request, adding: ‘This morning we removed the sculpture. It will be held at our museum for the artist to collect or donate to our collection.’ 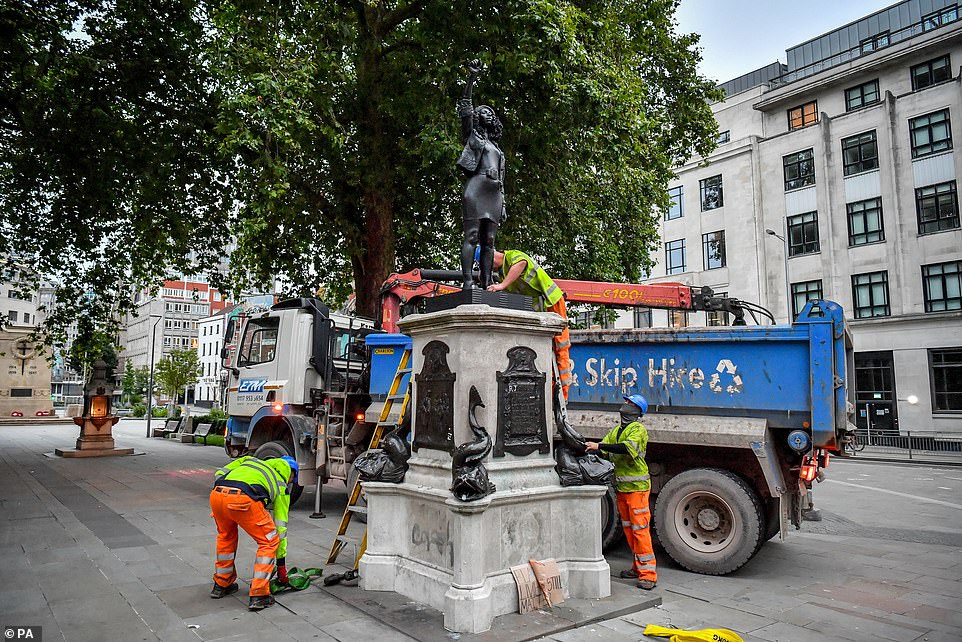 (The detail of murdering something like 80 million of his own citizens to try and make ‘communism work’ before realizing it doesn’t by Mao, a detail I guess)

5. Looking at other available, effective, and inexpensive treatments for Covid

Related: A one hour conversation with Dr. Vlad Zelenko, the man who brought HCQ to our attention. (We haven’t auditioned this video yet, but are posting it for its likely value to those pursuing understanding of HCQ and the leftist propaganda campaign against its use for Covid.)

6. Ontario Zoom group discusses the science behind Covid, treatment and the reporting on it. From July 2, 2020. “They could have done it with ANYTHING”. (Background and source evidence listed at Youtube)

7.  The Science is conclusive on masks and respirators, this article claims.

(Personally I have no idea of the eficacy of masks other than the personal feeling that they are uncomfortable, stressful to wear, and make it much harder to breath. The author is Dr. Denis G. Rancourt, PhD – April 20, 2020)

Furthermore, the relevant known physics and biology, which I review, are such that masks and respirators should not work. It would be a paradox if masks and respirators worked, given what we know about viral respiratory diseases: The main transmission path is long-residence-time aerosol particles (< 2.5 ?m), which are too fine to be blocked, and the minimum-infective-dose is smaller than one aerosol particle.

The present paper about masks illustrates the degree to which governments, the mainstream media, and institutional propagandists can decide to operate in a science vacuum, or select only incomplete science that serves their interests. Such recklessness is also certainly the case with the current global lockdown of over 1 billion people, an unprecedented experiment in medical and political history.

8. Canada’s NCCM Executive Director: “How are we Muslims going to recreate Cordoba [caliphate] in any Canadian city?”

The National Council of Canadian Muslims (NCCM) was originally named CAIR-CAN, that is, the Council on American-Islamic Relations in Canada. Its record can be seen HERE.

The NCCM advises the Trudeau Liberal Government of Canada on issues of “racism” and “Islamophobia,” including on matters related to a 23-million-dollar followup plan to the anti-Islamophobia M-103. The plan stipulates that Canadians will be “monitored for compliance,” and that law enforcement will be trained to investigate online and offline “hate.”

The NCCM also sent a formal letter to the Trudeau government complaining about my writings for Jihad Watch while I was an appointee to the Canadian Race Relations Foundation. I was subsequently fired.

The National Council of Canadian Muslims also expressed concerns and sent a formal letter to the government in October. Executive director Ihsaan Gardee said Douglass-Williams’ removal is an “appropriate corrective measure taken by government to address (her) disturbing public record.”

The NCCM’s original definition of “Islamophobia” as a guide to the Toronto District School board was as follows:

(Please read the rest at Jihad Watch linked above)

9. German authorities placed children in the care of pedophiles since the 1960s

10. President Trump gives a hint that he will do something to help the couple in St. Louis who were arrested for defending their homes with guns.

Thank you EB., Wrath of Khan, Johnny U., Oz-Rita, PC., M., ML., Rich, and all of you who are in any number of ways both helping this site survive and be useful, as well as working for the great cause of the continuation of Western Civilization.