Chronicling the Silencing of Dissenting Voices – 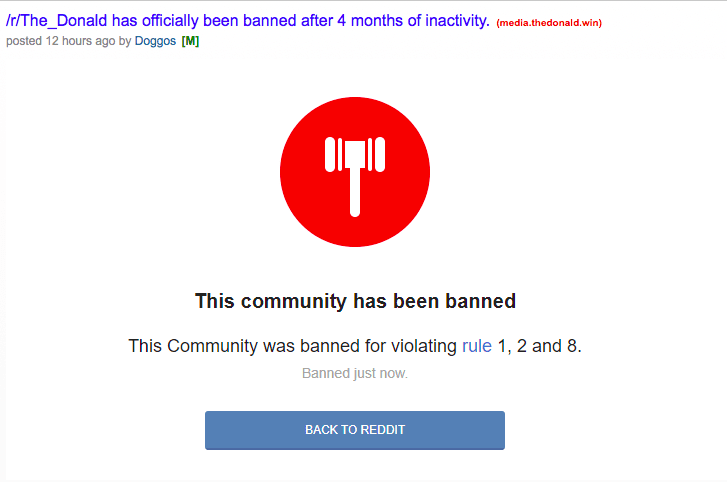 In the lastest purge of offensiveness on online platforms (POOOOP), with nearly 800,000 users, The_Donald and 2,000 other “Hate” subreddits were removed yesterday from Reddit. The unsurprising final blow came after a series of measures “to contain” the group. Even before COVID-1984, The_Donald was placed under quarantine. (Was it foreshadowing?) In June of 2019, ironically, the quarantine was decreed, due to comments posted to the forum which threatened violence against the police. Seeing the writing on the wall, administrators of the group created their own website (thedonald.win) months ago, and a mass exodus from Chicom Spezland (Reddit) began. (The Donald can also be found on GAB and Discord.)

The Trump campaign uses Twitch for broadcasting rallies and campaign events. Twitch, Amazon’s live-streaming site, claims that a speech Trump made 2016 (Mexico is sending rapists) and more recently in Tulsa, violated their rules. The streaming service says the ban is temporary.

This temporary ban happened minutes after Reddit shut down The_Donald.

The subreddit isn’t directly affiliated with the president, but the Twitch channel is.

Youtube is notorious for its censorship jail, throttling views, deleting subscribers and shutting down channels of dissenting voices. The Youtube channel from Vlad Tepes Blog got the ax in January of 2019 for violating the ever goal-post-moving, Community Guidelines formerly known as violating Youtube’s Terms of Service. Well, yesterday Youtube banned Stefan Molyneux’s channel.

“This is Stefan Molyneux as you may have heard, 14 years of my life, thousands of videos, billions of comments, hundreds of millions of views and nearly a million
subscribers has been destroyed. Has been erased from Youtube.

The accusation is the usual one, that i’m fermenting violence and hatred and so on, which is not true at all. I have consistently promulgated the non-aggression principle and called for reason and evidence as the methodology by which we can resolve social disputes and differences doesn’t seem to have mattered of course the reality is that the book burning is underway. Myself and many other dissidents and anti-communist
intellectuals and speakers have also had channels destroyed across a wide variety of platforms within the span of only one hour in what i assume is a highly coordinated
effort to silence us.”

I believe the last great purge from Youtube started in December of 2017, when it announced that they were hiring 10,000 new moderators “to remove problematic content”.

However, the real origin is the day Susan Wojcicki became CEO of Youtube and made it her goal to make Youtube “responsible”. That push for cleaning up Youtube has lead to 2 “ADpocalypses”, countless demonetizations, and HAL-like algorithms.

We’re all aware of similar shakedowns happening at Facebook and Twitter. These attacks are coordinated as we’ve seen above and are undoubtedly timed. Just 10 day ago, on June 19th, Katie Hopkins was banned from Twitter, the Federalist and Zerohedge comment section were destroyed by Google,

@VDARE got banned from their domain registrar and GAB got blacklisted by VISA. Two days before that, on June 17th, GoDaddy cancelled the domain from Vlad Tepes Blog without notice, warning or explanation. (BTW -The back-up page is https://vladtepesblog.net)

So stayed tuned, be prepared and get connected because more POOOOP is coming. Contrary to all the Debbie Downers out there, I think the only way they will stop us is by shutting it all down, but we’ll regroup and come back stronger. We’ve had practice.