1. The BLM riots and protests are about destroying individualism and forcing communism on us all. Many people will not come to accept this fact until its far to late, and likely then, the natural human tendancy to defend one’s purchases will make them confabulate reasons why they were right to back the protestors anyway.

But reason would say that while BLM is busy taking down statues of historical figures, even ones who fought slavery, and erecting this one, it would be a solid data point that this is about implementing communism of the Lenin-Mao flavour.

Perhaps more interestingly than the facts of the killing in CHAZ, is the police union spokesman kicked out of office for refusing to lie about racism.

5. Reading terror suspect who ‘killed three’ fled Libya seven years ago and was granted refugee status because he feared Islamists – before being jailed in UK and ‘converting to Christianity’

(Something very wrong with this whole story. Click through to read. Nothing in it worth posting really except he is a Libyan asylum seeker and claims he is Christian now.)

The two sides fought for eight hours in the Galwan Valley. According to the Sun, Indian soldiers have claimed the enemy was armed with spiked clubs, iron rods and batons wrapped in barbed wire. An Indian officer told News18: “Even unarmed men who fled into the hillsides were hunted down and killed.

It is thought Chinese commanders agreed to leave, but fighting broke out as Indians entered.

Colonel Babu was killed in the fighting.

Jamyang Tsering Namgyal, the BJP MP for the area, has said: “We don’t want soldiers of our country lose lives repeatedly.

We are working on videos now which should add clarity to last night’s events.

8. Gotta love the tellers of simple truths in times where we are all forced to lie with global consequences if we tell the truth as we see it.

9. Hellequin Gentleman Bastard brings is this quote from Julian Assange:

“The internet, our greatest tool of emancipation, has been transformed into the most dangerous facilitator of totalitarianism we have ever seen.
The internet is a threat to human civilization.”

Thank you Hellequin GB., Johnny U., Wrath of Khan, M., ML., EB., Richard, Sassy, Gates of Vienna, MissPiggy and all who remain in the fight and send in links.

The United Nations deleted their tweet supporting ANTIFA when they realized just how bad it made them look. It was indeed an authentic tweet verified by many people and had the white check from Twitter as well.

Here it is for those looking for it: 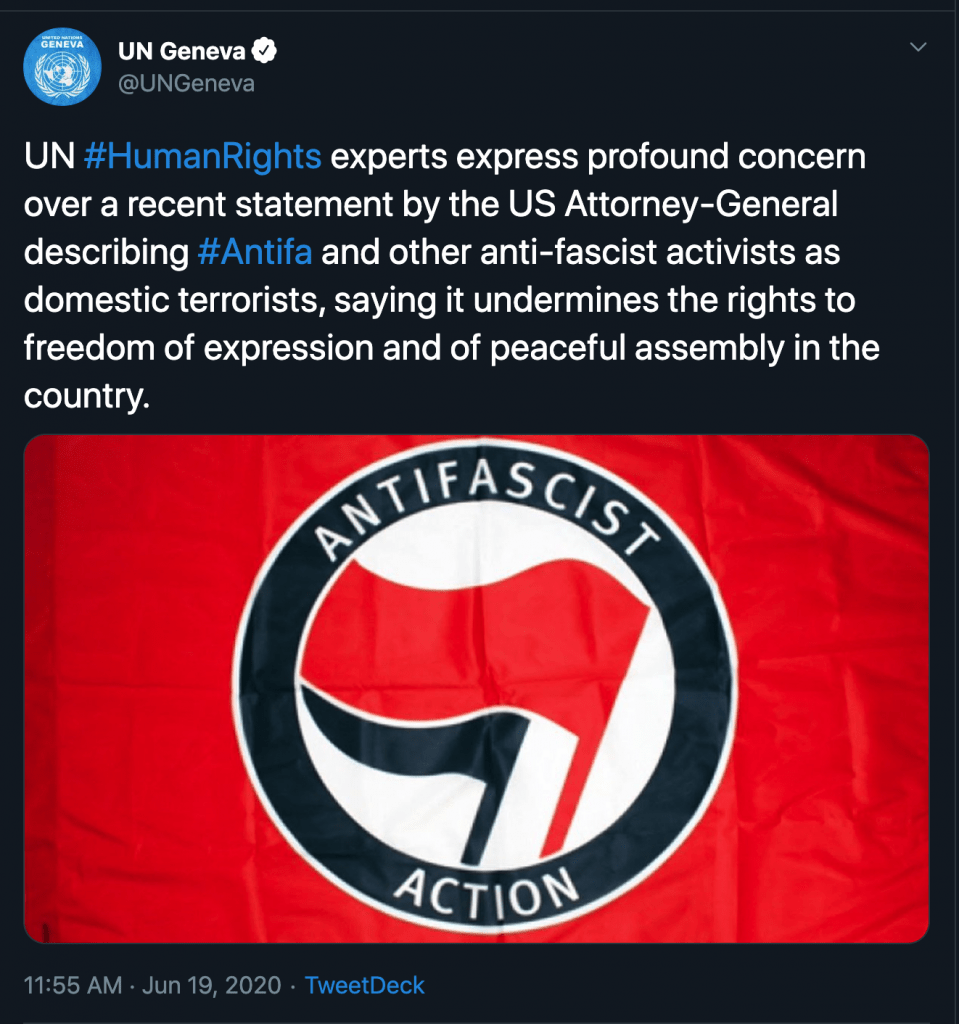