1. Amazing Polly looks at a few cases where well known leftist agents get run over by their own machine, starting with the Gotcha Propagandist, Wendy Mesley.

2. This makes sense. The UN is unsubtly led by a life long communist and we know for sure that the head of the UN health agency responsible for the global removal of all our basic rights is led by a life long violent communist revolutionary. As the UN has no real army, at least not one that does anything except hire prostitutes of whatever theatre they are posted to or sexually abuse the local kids, they have to try and get communists here and there to fight for UN authority to replace national authority.

This seems like a good time to repost this. We did this video right when the UN passed its “Compact” which is intended to be acted on in every Western nation, on migration, not just making all migration into nations based on Greek thought legal, but making criticism of that law or mass 3rd world migration illegal. Seriously. We covered that UN resolution when it happened extensively but no journalists did in any fashion other than as enthusiastic propaganda. Especially the CBC.

One German journalist did notice some of the issue with the “compact” though. Its probably in part why our Youtube Channel was struck down.

3. Probably shouldn’t forget that not just the communists are behind the incitement to get Black Americans, and Black people even in such countries with no history of slavery like Sweden, to rise up and destroy those nations, but the Muslim Brotherhood’s considerable influence.

(The video really kicks off at 4:15 or so. The whole video is under 7 minutes. And if you are wondering what rights the muslims in America are being denied, it is the right to apply the sharia to all of us, and to dismantle any state that is not ruled by Allah and the laws they ascribe to Mohammad’s imaginary friend)

4. A clear prediction on the next move by the Muslim brotherhood, communist alliance against the US. Go to 15:00 minutes in this video and by 16:30 he spells it out. Those two Pakistani brothers who worked for the Democrats and made off with all that classified material to Pakistan? They created a zone where the NSA could not read comms, is the claim, and the MB installed a large weapons cache in ISNA Indianapolis, and the moment someone gets shot or President Trump calls in the guards, ANTIFA will get those weapons. It is good to see clear predictions that are imminent unlike Global warming and its constantly moving end date. We will know if there is truth to this soon.

5. Speech in Christchurch NZ on Jacinda, the New Zealand version of Trudeau.

6. London: Patriots go to guard statues of Winston Churchill themselves as police clearly will not. As a reward, the APF calls them “Far Right Activists”. So to be clear, an attempt to stop political violence, crime and vandalism, makes us Nazis. Just so you know.

(Subsequent videos show the patriots and police trading tear gas and missiles. But they should be understood in contrast to the treatment of BLM communist actual rioters who sought to loot, do damage and attack police rather than object to same. There is no equality of treatment. Those videos at the end)

7. HILARIOUS: Is the CHAZ Warlord About to Get Canceled for Homophobic Tweets? 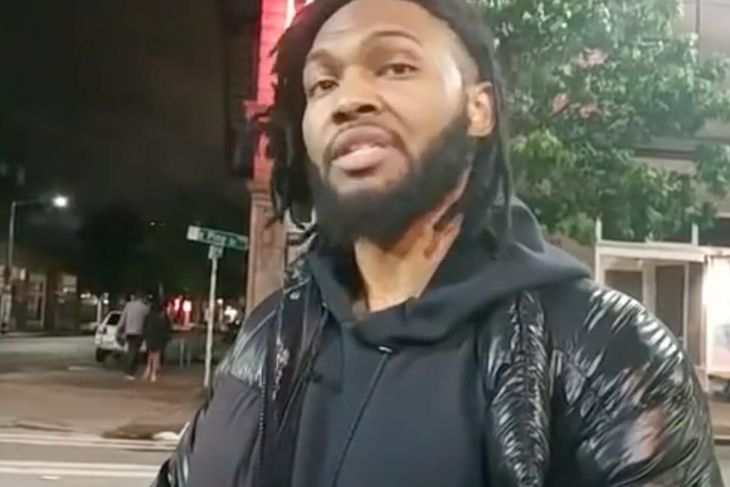 The outrage over the heinous police killing of George Floyd has spilled over into destructive riots and a hypercharged “cancel culture,” with a professor getting ousted for refusing to postpone final exams, a soccer player fired for his wife’s tweet, a church losing its lease over a pastor “liking” supposedly insensitive tweets, and New York Times op-ed editor James Bennet stepping down amid outrage that he published an op-ed by a U.S. senator. Now even Raz Simone, the armed militant who appears to act as something like a warlord over the antifa/anarchist Capitol Hill Autonomous Zone (CHAZ) in Seattle, Wash., is treading water after old tweets of his surfaced.

It seems a key leader of CHAZ may find himself “canceled.”

“Apparently LGBT people aren’t welcome in Seattle’s [CHAZ],” Mark Dice tweeted. He shared a screenshot of one of Simone’s tweets from 2010 when the rapper used a slur to attack another rapper as “the poster boy” for the LGBT community.

(IF Twitter does cancel the King of CHAZ then why is there even one religious muslim still on Twitter? they don’t mock homosexuals. They support their murder)

8. I wonder how much time and money Reuters spent looking for someone that could make the Hungarian law mandating realty look evil.

(One can easily visualize this “news item” as a Monty Python sketch from the 70s. No wonder the communists are trying to destroy all humour, and perhaps especially parody.)

The next time Western governments take all our rights away it will be because:

Thank you M., Wrath of Khan, Johnny U., PC., Olive, MissPiggy, Richard and so many more, some of whom I have lost track of as this post grew from the start.

6 Replies to “As Dystopian future novels go, at this point I think we should include Lord of the Rings: Links 1, June 13, 2020”