1. About that African cloth leftist politicians are wearing around the world…

(How racist do you have to be, to wear a cloth which is the identifier of one tribe, and a tribe that formed its own country by batting and conquering other tribes, just 60 years ago (Ghana) and think that all black people are one big mass that you can represent by wearing this cloth? In fact, more Africans probably look at this cloth like any other uniform of an imperial conqueror than those who wear it.)

2. The video called “Minneapolis Riot was Preplanned” was taken down from youtube.

To the owners of this video: If you do not want this video up at 3Speak please leave a comment and it will be taken care of. But as YT decided no one should see this, here it is for those that feel they have the capacity and right to make up their own minds. After all, public libraries have copies of Mein Kampf. So I guess we believe people can decide for themselves what is information and what is not.

Stephen Coughlin had this to say about the video below:

Any analysis of what happened in Minneapolis that starts with the events of Minneapolis is wrong. https://t.co/0tlNTxuxnk

4. Ethnic minorities can now make up any excuse they want to attack white people in any way for any reason.

I want to see real ACTION now in the UK about this @BorisJohnson @pritipatel https://t.co/07WNlRs39l

(We already know many on the centre and centre left are reevaluating their stance on gun ownership. But it would be nice if they said it out loud.)

5. The left is now after the statue of the man most responsible for defeating the actual real historical Nazis. This pretty much is the full monty for the left.

Wow. The mob is back for Churchill. An unarmed police force won’t be enough to stop them. https://t.co/dQIbmmonzp

6. Islamic scholar predicts Islam, not China, will lead world and France and Germany will be Islamic. I think he right about France and maybe Germany.

(We posted a lot on this back in May when it was new. But added to the next story it seems worth looking at again)

A forthcoming Australian scientific study concludes that the coronavirus causing the global pandemic contains unique properties suggesting it was manipulated in a Chinese laboratory and was not the result of a natural occurrence.

Five scientists who conducted the study discovered an unusual ability of the SARS-CoV-2 virus, as the pathogen behind COVID-19 is called, to easily infect humans.

The scientists said there is no sign so far that the virus can be found in other animals, including bats or the exotiwildlife sold for fresh meat at a market in the Chinese city of Wuhan, where the virus was first identified and where China maintains a major laboratory studying such viruses.

(The most important paper on this was by Indian scientists which was mysteriously retracted for problems with methodology, although no one could find methodological problems including a Ph.D in Biology we know who studied the material for weeks looking for it. That paper also appears on the Retraction Watch site we linked yesterday.)

8. WHO says COVID-19’s silent spreaders are ‘Very Rare’ then backtracks amid controversy.

(It feels a little like the WHO retracted cause this women who spoke didn’t get the memo. And another dung brick from the BS wall that justifies the lockdown policies comes loose) 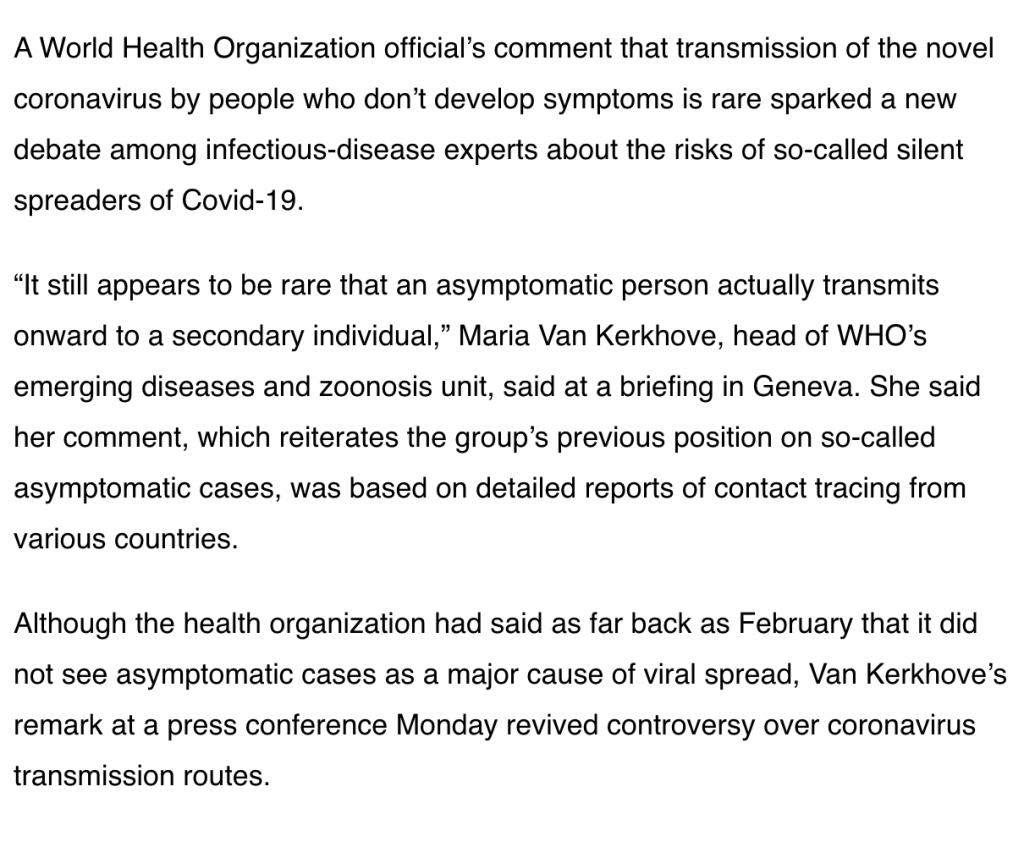 Thank you all who sent in materials overnight. I have to hit publish right away as the site is acting up and im in danger of losing posts and items. Will do more shortly.