1. Stabbing attack in Hackney. Lots of witnesses, no descriptions. Just another in at Airstrip One.

(No point in quoting from the article, so far at least, its all in the headline. Mine, not theirs.)

PARIS (Reuters) – France said on Tuesday there was no doubt Iran’s intelligence ministry was behind a June plot to attack an exiled opposition group’s rally outside Paris and it seized assets belonging to Tehran’s intelligence services and two Iranian nationals.

4. Terror at the Moria refugee camp

A group of IS followers are said to be terrorizing people in the Moria refugee camp on the Greek island of Lesbos. On the pretext of religious propriety, they brutally punish whoever they deem criminal. Two DW reporters investigate the rumors.

Moria Camp on Lesbos is considered Europe’s worst refugee camp. More than 8,000 people live here, crowded together in an extremely confined space. The only thing that seems to work is crime: drugs, prostitution and violence. Recently more and more refugees from Deir ez-Zor, one of the last strongholds of Islamic State in Syria, have been arriving in the camp. Since then it seems that crime in the camp has taken on a new quality. A group of Syrians is said to be controlling most of the illegal activities. Anyone who doesn’t toe the line or is in the way can expect physical violence or even death threats.

The perpetrators often cite Sharia law as their justification. More and more graffiti glorify IS. The Greek authorities take no action. Has IS successfully infiltrated Moria refugee camp? If so, what does that say about the way this terrorist network functions? And is organized crime increasingly positioning itself under the aegis of Islamic State? Bachir Amroune and Mariel Müller investigate.

5. Soros the main force behind the vicious and ludicrous attacks on Kavanaugh.

6. A fast explanation of the fascist and totalitarian reality that is replacing democracy at Mach II.

7. Instead of deciding who you should reflexively believe, lets go back to science, reason, evidence and due process.

The company said attackers were able to exploit a vulnerability in a feature known as “View As” to gain control of people’s accounts.

The breach was discovered on Tuesday, Facebook said, and it has informed police.

Users that had potentially been affected were prompted to re-log-in on Friday.

Thank you Richard, Johnny U., Xanthippa. M., Wrath of Khan, EB., and all who sent in materials.

Election results Vs. polling in Quebec and Manitoba are revealing. People lie to pollsters.

And now, for the conspiracy theory:

I am willing to bet that the Soros cabal along with his other Billionaire globalist buddies, Trudeau, the UN, the EU, Merkel and the rest of them, using polling data to try and figure out how much they have to rig an election to stop any non-leftist from being elected.

The commies are a lot smarter this century than last.

They married marxism to the culture instead of the economy, so that they could get big business on board with it.

And they are destroying freedom with lies and rhetorical devices rather than really obvious force, leaving that to the thugs and liars of ANTIFA to be applied in small doses where freedom lovers and non-leftists try and present.

And instead of having election results like Saddam Husain where 114% of the public vote for you, they do the bare minimum that would be effective. Cause a win, is a win right? It doesn’t matter if you win with 1% or 90% so long as you win.

Remember when the leader of I think it was the Green Party in the US raised a pile of cash to recount the votes in a few districts where Trump won, only to find out that he in fact won bigger than had been reported? This is an indicator to me that they had estimated the degree of rigging needed and done so, but people had lied to the pollsters. So it still didn’t work.

The same thing happened for BREXIT and a few other elections in the past couple of years where the polls tilted left and the vote tilted right.

I don’t think people lie to the pollsters for this reason. I think they lie because they are afraid of being on a list if they say they are not leftists. And they are right to be afraid.

But it has the same effect. Thankfully.

Speaking of ANTIFA and their voluminous amount of verbal fertilizer, have a look at this upcoming event in Ottawa: 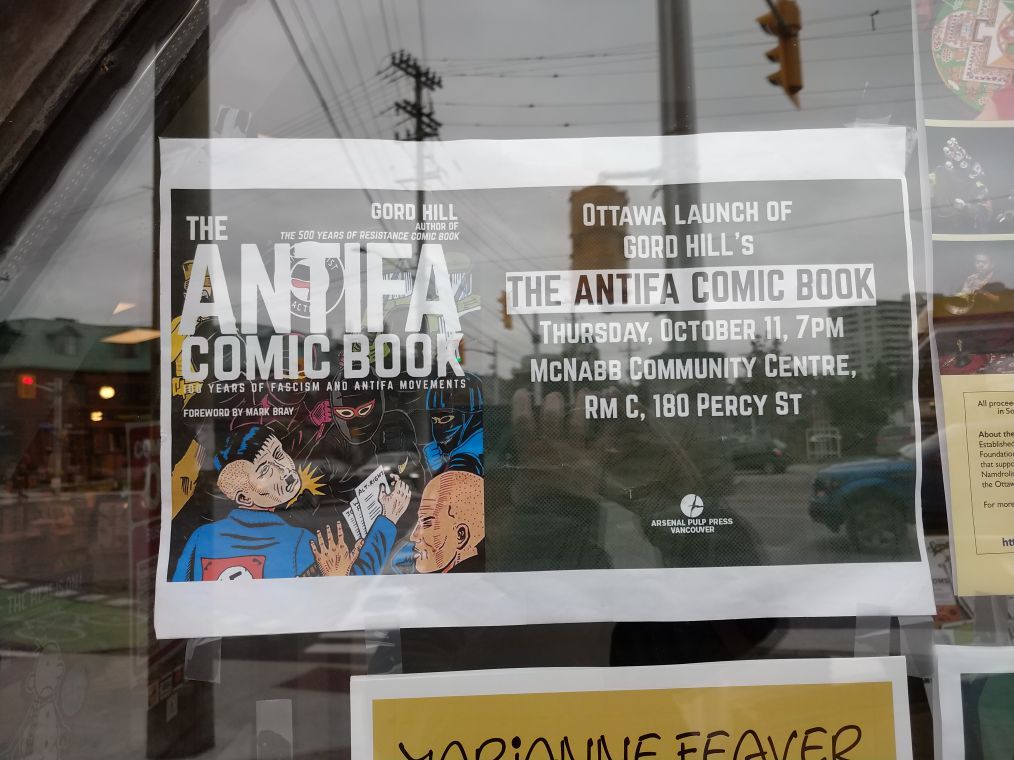 I wonder if there is a single “anarchist” in the world that doesn’t feel a giant all powerful government is required to make sure anarchy is maintained.