1. Maxine Waters doubles down on her inflammatory rhetoric. One can only hope that she personally pays the price for it rather than the useful idiots whom she inspires.

2. This is a great thread from Thomas Wictor about the Sanders and the Red Hen Restaurant story. Its worse than we thought. One example from the thread:

(4) “The owner of the Red Hen restaurant not only kicked out Sarah Sanders and her in-laws, but she followed them to another restaurant, organized a group of people to assist her efforts, and then led the mob in continued harassment of the Sanders family.”

(As a kid in the West, they used to teach you, “what goes up, must come down”. I guess that doesn’t translate into Arabic)

5. Count Dankula on the absolute state of the UK

The Actual State Of The UK @vladtepesbloghttps://t.co/6ZSoTzd8S7 via @YouTube

Thank you Richard, M., Wrath of Khan, English Alec, Xanthippa, Egri Nok, Perfect Child, Shabnam A., and many many more who sent in a lot of quality information about important events. not to mention of course, our hard working translators, such as Ava Lon, for the Macron video in the previous post.

Today we decided to test drive the transplanting of a Spanish tradition here to Canada. The first annual Santiago Matamoros day with a traditional Torte de Santiago.

Our good friend Xanthippa made one from a traditional recipe which was really enjoyable and as we ate it, I started to think about how before the internet and TV, people seemed to create traditions in Europe by creating baked goods as a way of commemorating the elimination of islam and muslim rulers and invaders from European nations.

The Croissant for example, was made in the shape of an Islamic crescent specifically to destroy by eating, and one might presume that it was a way of keeping the remembrance alive of the defeat at the Gates of Vienna which was under siege from muslim attackers for so long till King Jan Sobieski III from Poland rode to the rescue of the good people of Vienna. Marzipan also was a creation from those times and for related reasons.

This Wikipedia source gives two origins stories, both related to the defeat of invading muslims, at Tours, and at Vienna.

I have a dim recollection of Marzipan being a food that was invented in Vienna during the siege when there was nothing left but flour, water, and almonds and some sugar, but I cannot find that link or story anymore.

But it would be no surprise to find across Eastern Europe foods that were created and made traditional after the ejection of Islamic invaders and overlords. The Jewish people have a 3 cornered cookie made once a year to celebrate the failure of an early enemy of the Jews to eliminate them as a people as well.

So any readers aware of such things, please do post the stories and recipes. These are clearly traditions that need reviving.

Also a reader of this site pointed out that Santiago Matamoros day is not today, but July 25th. I don’t know for sure but we did it today.

But if its July, that gives you all a month to make one of these, and share it with family and friends and tell them about the tradition, the Reconquista of Spain, and why this baked treat exists. 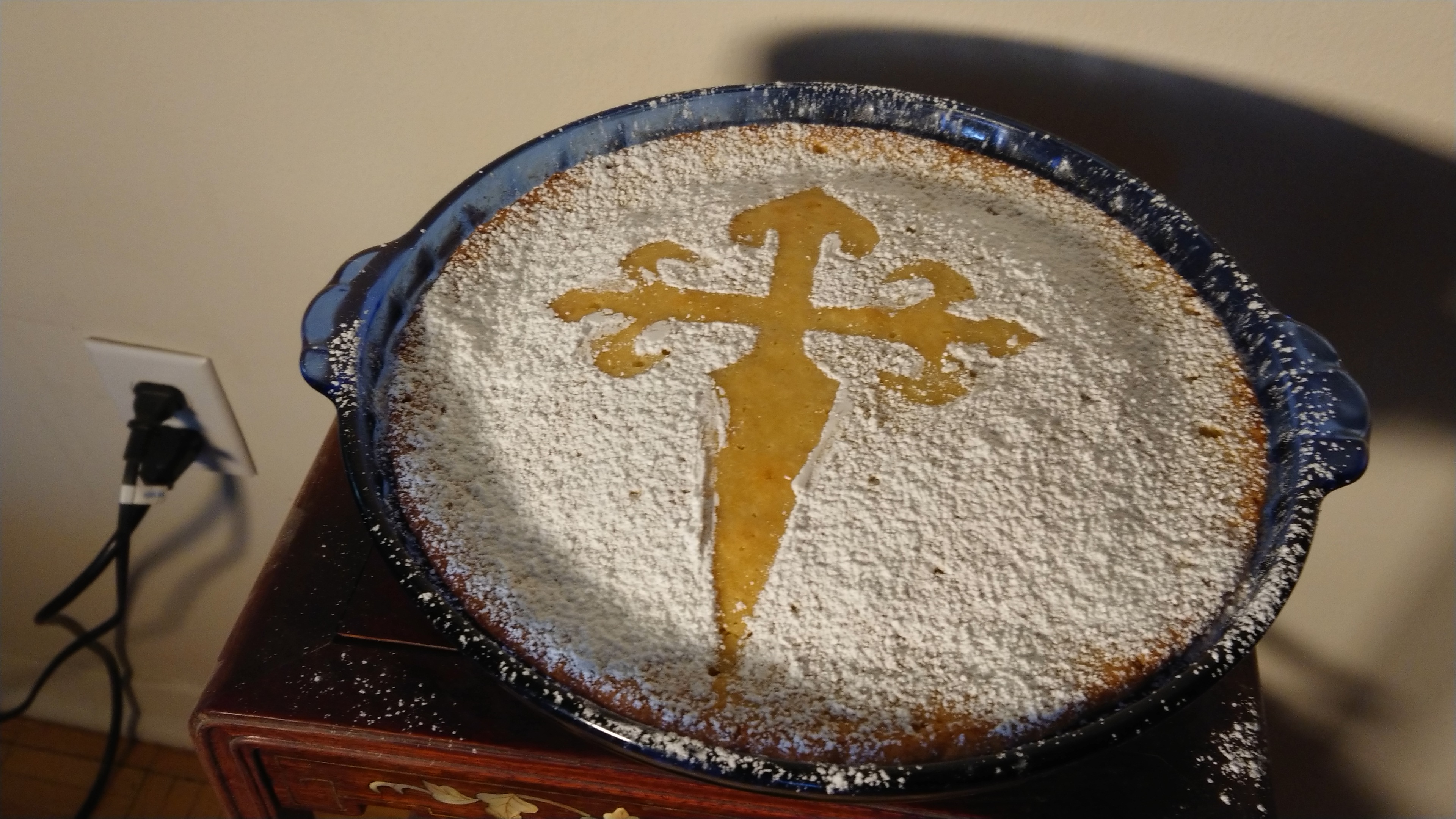 I made a little whipped cream in the blender to go along with it. Just 35% whipping cream and 3 or 4 drops of Stevia and it was fantastic. Although the cake is truly wonderful on its own. Recipe linked here!