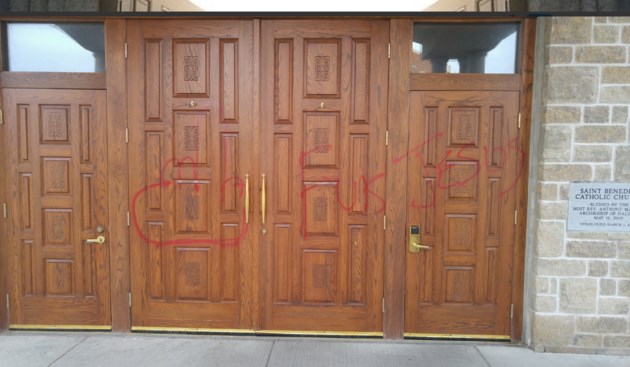 HALIFAX- Many churchgoers on Easter Sunday were expecting to hear about the resurrection of Jesus, but instead found vandalism on two Halifax-area churches.

Saint Benedict Church on Radcliffe Drive in Clayton Park and Saint Agnes Parish on Mumford Road were both vandalized with spray paint during the early morning hours of Sunday.

Father James Mallon, former pastor at Saint Benedict, said the vandalism is disturbing to see and significant given the time of year.

Mallon said the incidents are unfortunate and feels sad for the person who vandalized the two properties. […]

(The CBC has a story on this event with more profane pics as well but not typically what you see from muslims actually. Sexual profanity is not the classic modus of muslims who are attacking Churches across the world now. More destruction and contradiction of doctrine and threats. The speaking however appears not to be by a native English speaker.) 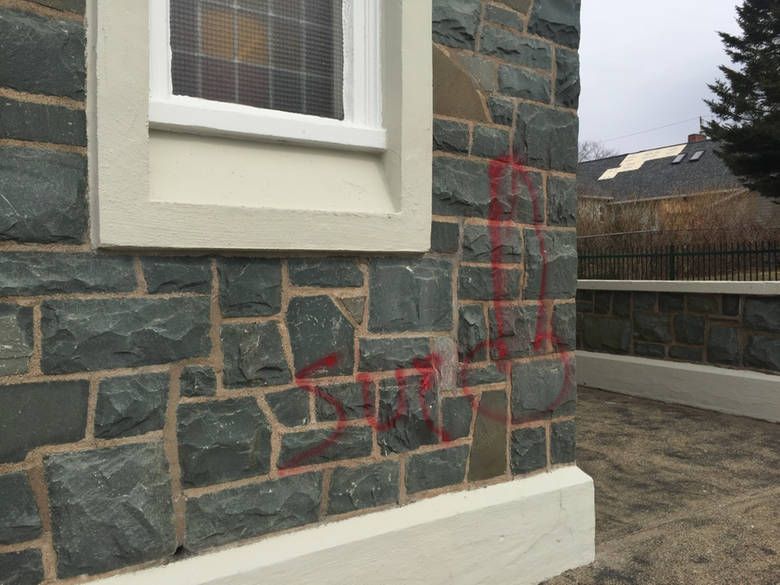 3. All Americans and Canadians really need to read this article and listen to the audio file embedded below, This raises some questions that perhaps after a year of the Trudeau government, we might be willing to actually look at.

He claims to have “The Mount Everest of evidence” that actual active terrorists for Al-Queda etc. are living freely in Montreal, and the authorities know it and consciously do nothing about it while avoiding any real questions on the matter.

A U.S. photojournalist kidnapped and tortured by al-Qaida in Syria in 2012 laments in a new book that the RCMP has still not arrested any of the Canadians who were allegedly involved.

In The Dawn Prayer, or How to Survive in a Secret Syrian Terrorist Prison: A Memoir, Matthew Schrier writes about “the Canadian connection” to the seven months he was held captive in Aleppo.

A month into his kidnapping, he was brought before three Canadian-sounding jihadists who wanted his online passwords. His credit cards were subsequently used to make thousands of dollars worth of purchases.

Some of the items were delivered to an address in Montreal. Schrier believes one of the suspects bought the goods using his real name, which he learned from his credit card records.

But almost five years later, no charges have been laid.

4. South Africa. What to expect.

5. Four siblings aged 10 to 18 reported their own parents to the authorities after they ‘were made to watch ISIS beheading video that left one so traumatised he cannot speak’

Four siblings have been taken into care after they reported their parents for expressing anti-British, anti-Semitic and homophobic views.

One of the children, a 10-year-old-boy with learning difficulties, has been left so disturbed his treatment he is unable to speak, reports The Times.

6. This is exceptional. From the European Parliament:

Thank you Xanthippa, M., Miss Piggy, Richard, Wrath of Khan, to be honest, this Reader’s Links post today is an avalanche of needed truth and there are too many to name, but not too many to whom to be grateful. So thank you all and please keep it up. The network is growing, the degree of influence of our audience, both in numbers and the people who follow the Reader’s Links posts and this site are growing.