1. Mandatory cultural-Marxism reeducation or something you paid and worked for will be withheld from you.

This one is for my, so far informal, ‘Canada is a communist country’ file. I hope someone more organized and with the time and drive is making a formal one. It needs to be published as a booklet and soon. Examples are far too common and increasing in frequency and importance.

First-year law students at the University of Ottawa appear to have been threatened with having their final grades withheld if they didn’t attend a mandatory sexual assault prevention program.

A professor had circulated an attendance sheet and urged everyone to sign it because ‘if we did not have proof of attending, “all manner of bad things will happen” ‘

The National Post has learned that on Feb. 14, assistant dean of the faculty’s common law section, Amanda Turnbull, sent an email to all first-year students, telling them that if they failed to attend a workshop, they would need to justify their absence just as they would have to do for missing an exam.

It fits into the trend of Canadian law schools – such as the University of Windsor’s, which recently rued the verdict in the trial of Saskatchewan farmer Gerald Stanley as evidence of how “Canada has used law to perpetrate violence against Indigenous Peoples” — as being more interested in social justice than legal principles, as Queen’s University law professor Bruce Pardy recently wrote.

“Attendance will be taken,” Turnbull warned in her Feb. 14 note. “Those who do not attend the workshop will be asked to find and undergo similar training prior to grade entry in April 2018.”

In other words, there would be no “grade entry” for any student who didn’t complete either the workshop or comparable training.

(Abandoning pretty much all our institutions and moving to grass roots may be at least a partial solution to the PoMo/Marxist subversion of classically liberal society.)

2. Julian Assange felt he had no choice. Counter the stunning nonsense of Eric Holder with truth.

WikiLeaks co-founder Julian Assange has pinned the blame for the website’s releases ahead of the 2016 presidential election on the Obama administration, as it put him in such conditions where he had “nothing to do but work 24/7.”

Assange made the quip on Twitter Friday, responding to a two-week-old anti-Russian post by the former Attorney General Eric Holder.

Holder, who headed the Department of Justice from 2009 to 2015, put forth the usual set of allegations against Moscow, claiming Russia would interfere with the upcoming US midterm elections.

3. Ever wonder why George Orwell was British and not Russian?

I suppose most of us regulars at this site were wondering when this stage would arrive. Now we need to anticipate the next one.

Your Central Valley reports that the permit holder was taking his normal, early morning walk along a canal when the suspect approached and a “verbal confrontation” ensued.

Fresno Police Chief Jerry Dyer said the confrontation escalated when the suspect allegedly “picked up a large stick or wooden object” and struck the 73-year-old. The elderly man pulled a handgun and shot the suspect three times in response.

The suspect was taken to the hospital to receive treatment for gunshot wounds, while the elderly man was taken to be treated for the wounds sustained after being hit with the stick.

(I don’t really want to post stories about successful self defence by armed victims as they are in fact common. But the narrative hides them and rewrites the facts to make any gun or gun activity a terrible thing unless its a Hollywood star waving one around pointlessly in a movie. So I suppose from time to time reminders of the facts are needed. Please see Richard’s posts in the comments as he, from time to time, posts real gun crime and prevention stats.)

5.Belgians protest against a major mosque project in Flandres.

6. The genocide of White people in South Africa might have started. I don’t know where this image came from or how accurate it is, but the highly credible reports coming from inside South Africa recently mean that this item is likely enough to be true, to be worth posting. 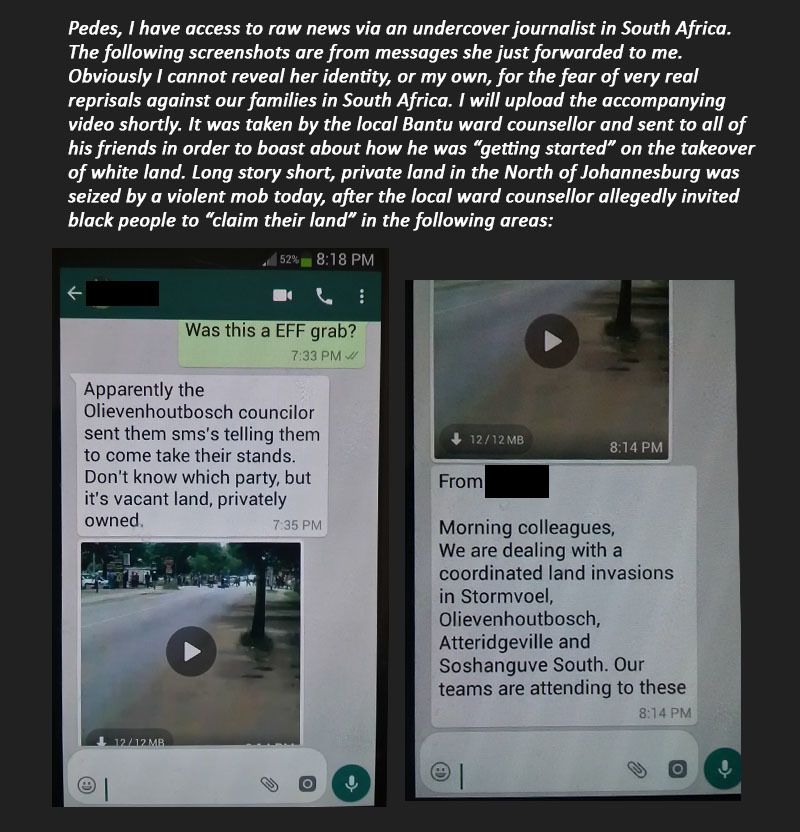 Thank you all who sent in materials. You know who you are, and I have lost track under an avalanche of stuff to catch up on after the week passed.

A note to readers from the Canadian province of Ontario:

A last word about the odd Provincial Conservative leadership election that was declared today.

On the surface it appeared to have been rigged for one candidate who was in fact indistinguishable from a far leftist like the ones who have been running the province for some years now. This candidate approved of “carbon taxes” and the bizarre sex-ed curriculum that had been written by a man who is actually in jail for molesting children right now.

To add to that appearance, she was the only one of the candidates who did not want to postpone the election results till a large number of people who had paid for their memberships in time, and had been denied ballots in time to vote, had been sorted out.

The rest all wanted an extra week to allow these people, some of whom I know personally, had been able to vote. The National Post did a bit on this in fact, here and also here.

But much like the US federal election of 2016, where it seems to many of us that the vote had been rigged for Hillary, but just not by enough, Trump prevailed, and Trump, frankly, was the only one of the candidates who in retrospect is capable of cleaning out the massive psychopathic corruption of senile institutions like the DoJ, FBI, much of the CIA etc. Similarly, Ford, the actual winner by a thin margin of the official vote, and probably by a large margin if those who registered to vote and met all the criteria had not been mysteriously disenfranchised, had cast a ballot, seems the sort of character who can also restore the provincial PCs to something like an actual conservative/classical liberal party.

I will stop short of an endorsement till I see evidence of the kind of sweeping that room needs badly. Much like the US Republican Party which was very nearly as bad as Obama-Clinton’s Democrats. A pizza, a case of beer and 10 hours watching Frank Gaffney’s excellent series on MB infiltration of the US political system should douse any doubts anyone has on that subject.

Meanwhile, take the time to become familiar with the Freedom party of Ontario. From what contact I have had with them they are really excellent on the issues of Islamic subversion of the West and leftism. They get the issues thoroughly. And if Ford turns out to be another swamp creature, I would strongly suggest researching them, and voting that way.

UPDATE: Fraud and manipulation appear to be ongoing as Christine Elliot seems unwilling to concede the loss in a remarkably Clinton like manner.