1st the Iranians launched an attack drone into Israel, which the Israelis tracked and shot down [a]. 2nd the Israelis sent jets into Syria to hit the Iranian command center that had sent the drone, at the Tiyas Airbase in Syria [b]. 3rd forces backing Bashar al-Assad fired off “dozens” of anti-aircraft missiles, including into Israeli territory, which forced Israeli communities to go into lockdown and the pilots of one F-16 to abandon the jet [c][d][e]. 4th the Israelis sent eight jets into Syria to target a dozen Syrian and Iranian military facilities (lists and descriptions of the targets: [f][g]). 5th Assad forces fired off another 15-20 anti-aircraft missiles, again forcing Israeli communities to go into lockdown [h][i].

(1) The drone was similar to the advanced American UAV seized by Iran – The drone emulated Western technology [j]. The structure and sophistication were similar to the American UAV Iran seized in 2011 [k][l], including a “low signature” aimed at avoiding detection [m]. There are rumors but no confirmation it was armed [n].

(2) Iran has an advanced drone program, including suicide drones it distributes to proxies, according to the US military and EU – In 2012 Hezbollah threatened to use suicide drones to target Israeli civilian nuclear infrastructure [o]. Iran subsequently developed and distributed suicide drones to Hezbollah, according to the US Army, and to the Houthis, according to the EU [p][q]. By 2015 Hezbollah had a full-blown advanced drone base operating in Lebanon [r]. In 2017 Iranian allies and proxies fired drones toward U.S.-backed forces in Syria and into Israel [s][t]. The Iranians released footage of one of their drones shadowing American forces the day before that attack [u]. Last week Iran opened a line to mass-produce offensive drones meant to be loaded with precision bombs [v].

(3) The Israelis released footage of the drone attack after Iranian state media and some Western outlets said it never happened – Iranian state television is saying that Israel fabricated the attack, a claim that has been conveyed by several Western media outlets [w][x][y]. The Israelis have published video of the incursion and interception [z]. The link is at the bottom or you can click on this screengrab:

Original footage showing #Iranian UAV infiltrating and then shot down over Israel, and #IDF strike on Iranian command vehicle in #Syria pic.twitter.com/Sz6poAOdjc 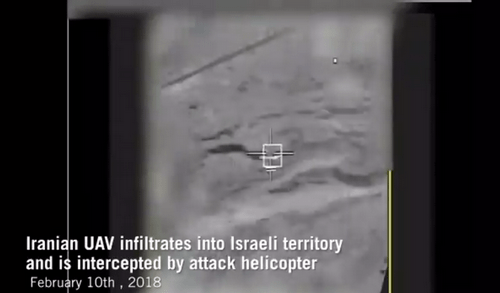 From the United States administration:

The Department of Defense did not participate in this military operation… Israel is our closest security partner in the region and we fully support Israel’s inherent right to defend itself against threats to its territory and its people… We share the concerns of many throughout the region that Iran’s destabilizing activities that threaten international peace and security, and we seek greater international resolve in countering Iran’s malign activities.

The United States is deeply concerned about today’s escalation of violence over Israel’s border and strongly supports Israel’s sovereign right to defend itself. Iran’s calculated escalation of threat and its ambition to project its power and dominance, places all the people of the? region — from Yemen to Lebanon — at risk.? The U.S. continues to push back on the totality of Iran’s malign activities in the region and calls for an end to Iranian behavior that threatens peace and stability.

11 Replies to “fact-sheet sent to journalists by Omri Ceren, a Managing Director at The Israel Project”