Ri Yong Ho, Pyongyang’s foreign minister, hit out at the US President and said the tensions will not be settled with words.

He said: “With his bellicose and insane statement at the United Nations, Trump, you can say, has lit the wick of a war against us.

“We need to settle the final score, only with a hail of fire, not words.”

(In this scenario, both parties are North Korea)

2. The other day we posted a video by Jordan Peterson and two people he was discussing the new Law Society of Upper Canada’s plans for full communist revolution.

Here is a link to their statement of requirements now for all lawyers who wish to practice.

Notice the term: “Accelerating Culture Shift”. Something I have heard also applied to Canada’s Department of National Defence from people who work there, as a policy being implemented.

It is also something no government anywhere in the world that claims to be for its people has any business doing. Culture is what the people are. Government is to protect that. Not “shift” it.

The website cnn-international.com was only registered two days ago according to WHOIS records and has nothing to do with the real cnn.com:
https://hoax-alert.leadstories.com/3468811-fake-news-police-did-not-arrest-mandalay-security-guard-jesus-compos-as-second-shooter-in-las-vegas-.html
Mandalay Security Guard Jesus Compos Arrested As 2nd Shooter In Las Vegas Massacre Is False
www.business2community.com/us-news/mandalay-security-guard-jesus-compos-arrested-2nd-shooter-las-vegas-massacre-false-01935141

Pertaining to the word “Killed” as used to describe leading Islamic State figures:

The British jihadist who became known as the White Widow has been killed in a US drone strike while attempting to flee the ISIS capital, it emerged last night.

Onetime punk rocker Sally Jones, from Kent, fled to Syria with her son in 2013 before becoming a recruiter for the ISIS terror group.

She was killed by a Predator missile near the border of Iraq and Syria four months ago as she tried to flee the group’s stronghold in Raqqa, it is understood.

5. Market trader, 56, is BANNED from town centre after selling Knights Templar coffee mugs that are ‘offensive’ to Muslims

A market stall holder has been banned from having a stand in a town centre because she was selling ‘offensive’ Knights Templar coffee mugs.

Tina Gayle has been prohibited from having a stall in Loughborough Market after someone complained about the mugs.

She said the complainant had told the council the £6 Knights Templar mugs were offensive to Muslims and so she was asked to remove them from her stall.

When she refused to do so she was sent a letter and informed she had been given an outright ban. 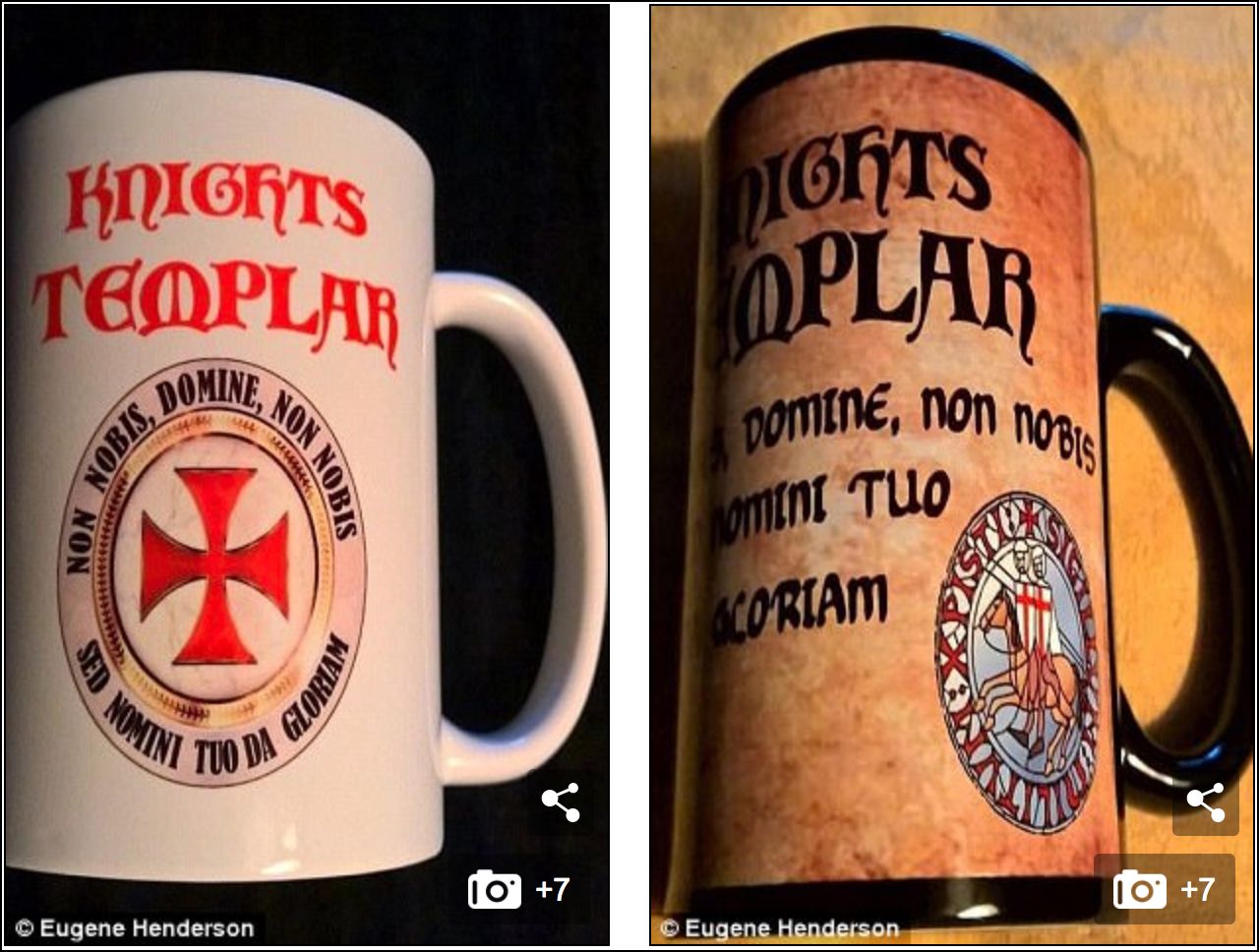 It might be a good time to try and find those mugs online. Also, anyone thinking of picking up a cross of Matamoros from this site may want to do so soon, both to get it in time to reship for Christmas, also while it still escapes the notice of “the local committee for the party”
Also, in the article, it attempts to discredit the saleswoman by linking her with Nazis in the most obscene and dishonest way. This is for no reason other than to stop people from fighting for her rights to sell Knight’s Templar coffee mugs. If she did sell Nazi Paraphernalia in the past, it is legal, it has no connection to espousing Nazi ideology necessarily, and the Nazis represent a huge part of the dominant set of memes of the 20th century. Trying to “eternal Sunshine” it out of existence is the way you guarantee it happening again. Which we did, and which it is.
The other way to guarantee the return of something like Nazis, and which we also did, was to make a smallish Austrian corporal into a God of Evil, worthy of veneration, fear and unnecessary amounts of attention.
I tend to look at the treatment of Hitler by Western institutions much like the movie, Reefer Madness. When you place that much pressure on a thing to be seen as pure evil beyond reality, you risk people saying that all which is written about him was false, when they discover that some of it is.
Like Reefer Madness, when you know someone who smoked a joint once and did not go on a wild murderous wide eyed raping spree, you tend to think there is nothing wrong with smoking the drug and you end up with a generation of late onset adult paranoid schizophrenia at worst, and a lot of really stupid people who otherwise didn’t need to be, second.
Treating Hitler like a God of Evil has done a lot of damage. Quantifying it at this stage is difficult as the process of “renazification” by the left and Islam is ongoing now. But its safe to say that we have loaned the name and the symbol set, power it doesn’t deserve.
Organizations of professional Jews are certainly to blame here, stomping out every instance of the appearance of a Swastika as if it was something the CDC should control.
Selling Swastika earrings (in the example linked above) are a 1st amendment issue even if it did represent the 3rd Reich, (although though I have a pretty solid idea of what the Nazis would do with a girl caught wearing their sacred symbol dangling from her ears). But worse, in this case it did not. It was a Tibetan symbol of the sort of intense harmonious and cleansing practices that define Tibetan Buddhism, and from whence the Nazis took it.
Now every school kid, desperate for a sense of personal power, as do all children, can use these symbols to upset and otherwise get ego satisfaction with little or no real understanding of what it means.
The answer to these problems is what it has always been.
More freedom not less.
It is restricting the rights of people to express what they feel that always leads to a reaction.
Canada’s tin foil hat Nazi wannabe, Ernst Zundel, was a no one, standing on a street corner handing out business cards with a land line number on it, and an old answering machine with an antisemitic message on it.
A group of professional Jews got hold of this guy and made him an international celebrity with his own publishing business by hysterical over reaction and abuse of law to suppress his right to be a whack job on a street corner.
In a 1987 interview, Marine Le Pen’s father, said that gas chambers were nothing more than a “detail in the history of World War II,”
For that he was charged with Holocaust denial, even though he did not deny the Holocaust, but felt that it was out of proportion to the seriousness of the war overall. I do not want to debate whether or not he is right. There are strong cases to be made for many points of view of the 50 million people killed as a result of the geopolitical and genocidal ambitions of Adolph Hitler. But being criminally charged for insufficiently venerating it, when shortly afterwards, eight million Ukrainians were starved to death in front of full fields of their own crops by the communists, and Mao managed to murder something like twenty million of his own people to try and create the perfect man, exactly what Hitler was trying to do and for the same reasons and by the same logic.
Communism managed to exterminate some hundred million innocent people for ideological reasons which on examination, have lilliputian differences from Hitler’s reasons for killing the Jews. And communists managed this feat in peacetime.
Yet Stalin and Mao are symbols university students think are cool and those ideals are attacking, in the guise of “antifa”, real liberals and real refugees from post Soviet states every day somewhere now.
Anyone wishing to understand the comparison between communism’s “bad sociology” which led to frequent mass exterminations of groups as designated by postmodern thought, and Hitler’s attempt at genocide of the Jews, using “bad biology” based on postmodern concepts of who and what the Jews are, may want to see the truly superb and very important film, The Soviet Story. Sometimes available in full on Youtube. But is well worth purchasing on Amazon.
Thank you Richard, Tundra Tabloids, M., Wrath of Khan, and all who sent in materials today. There is more to come, as well as more videos from Italy.